What in the world is happening to America?  Recently, I was asked to describe what we are watching happen to our nation.  After thinking about it, I have come to the conclusion that it is almost as if a “cloud of insanity” has descended upon the United States and much of the rest of the western world.  From our top leaders on down, people are engaged in incredibly self-destructive behavior and are making extremely irrational decisions.  Some would describe it as being given over to a depraved mind, and I would have to agree.  It is almost as if some sort of severe form of mental illness were rapidly spreading through the air and infecting everyone.  Virtually every day I am immersed in news and current events, and it can be difficult to shock me after all this time.  But lately, there have been quite a few stories that have stunned even me.  The following are a few of those stories…

#1 A 27-year-old woman in Maryland is hoping to “normalize naked breasts” by running around in public without any clothing on the upper half of her body.  So far she says that she has not been arrested and no men have tried to touch her inappropriately.

#2 It is being reported that “sex roulette parties” are becoming increasingly popular in the western world.  The concept behind these parties is that there is someone in attendance that is secretly HIV positive, and everyone engages in unprotected sex with others in the room without knowing who that particular individual is.

#3 The obsession with body art in the western world is officially getting out of control.  A couple of the hottest trends right now among those that are into “body modification” are to tattoo your eyeballs and split your tongue.

#4 A Catholic archbishop from St. Louis recently testified in court that he “wasn’t sure whether he knew it was illegal for priests to have sex with children.”

#5 All over the nation, colleges and universities are holding workshops and events to promote “polyamory” as “an acceptable lifestyle choice” to our young people.  According to Wikipedia, polyamory is “the practice of, or desire for, intimate relationships involving more than two people, with the knowledge and consent of everyone involved.”

#6 With each passing year, the level of debt slavery in this country gets even worse.  The average American household with debt now owes approximately $131,000 and is paying out about $6,000 a year in interest.

#7 A dangerous form of synthetic marijuana is popping up in many American cities these days, and it sends many of the users into zombie-like states…

Investigators in Clearwater described a scene out of The Walking Dead; people slumped over in such a stupefied state they could hardly move or speak. It was a patrol becoming too routine in Crest Lake Park as officers respond to a growing number of Spice, or synthetic marijuana, overdose calls.

Police say dozens of calls have come in for people who have had to be rushed to the hospital because of suspected Spice use. Tampa medical and law enforcement professionals warned last week about a dangerous uptick in overdoses possibly linked to a bad batch of the drug. Clearwater investigators aren’t ruling out a connection to the Tampa cases.

#8 According to some progressives, identifying yourself as an “American” is now considered to be a “microaggression” and should be avoided because it might offend minority groups.

#9 Even though we can see what socialism has done to Venezuela, North Korea and dozens of other failed regimes throughout history, young Americans are embracing it with gusto.  In fact, one survey recently found that a majority of American young adults under the age of 30 say that they completely reject capitalism.

#10 The Obama administration has just issued new “guidelines” that require public schools all across America “to allow transgender students to use the restroom and locker rooms that correspond to their chosen gender.”  So 55 years after President John F. Kennedy declared that we would put men on the moon, Barack Obama is declaring that we will put men somewhere else where they have never been before… 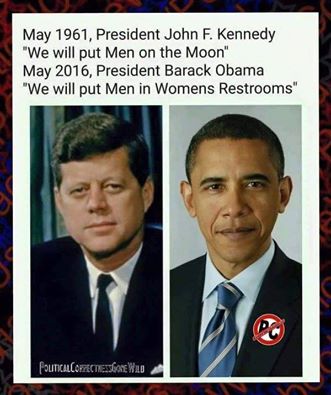 #11 One anonymous member of Congress identified only as “Congressman X” is making waves by putting out a new book that explains what really goes on behind the scenes in Washington.  The New York Post has published some new quotes from this book, and a couple of them are quite stunning…

Congress is too polarized and partisan to get anything done, by the congressman’s account.

“There seems to be a complete disintegration of confidence in government. A fear that government is its own special interest,” he says.

“America’s on an irreversible decline and no one in Washington seems to care . . . ”

When even members of the U.S. Congress start admitting that our nation is in “an irreversible decline,” you know that the party is just about over.

#12 When you look up the term “corrupt politician” in the dictionary, photographs of Bill and Hillary Clinton should be right there.  Bill has a history of well documented sexual escapades that goes back for decades, and both of them should be serving long prison sentences for a shocking series of horrible crimes that goes all the way back to the 1970s.  But the American people are willingly ignoring all of this, and if the election were to be held today it is almost certain that Hillary Clinton would be the next president of the United States.

Ultimately, we get the leaders that we deserve, and I am not just talking about the White House.

If you look at Congress today, they very much reflect who we are as a nation, and it isn’t a pretty picture.

One of the big reasons why there is so much craziness in America today is because there is no longer a shared set of values or morals that unites us.  You would like to think that we should all be able to at least agree on the U.S. Constitution, but in law school I learned that courts routinely ignore the Constitution whenever it suits them.  In fact, we might as well not even have a Constitution anymore because hardly anyone in the legal community takes it seriously these days.

Without any foundation to stand on, it is inevitable that our nation will crumble.  The widespread insanity that we are witnessing is simply the acceleration of a process of decay that has been in motion for decades.

I would like to think that we could turn things around, but at this point I am not very optimistic.

Do you think that there is hope for the future of America?

Don't forget to like SonsOfLibertyMedia.com on Facebook, Google+, & Twitter.
The opinions expressed in each article are the opinions of the author alone and do not necessarily reflect those of SonsOfLibertyMedia.com.
Previous Post:
On Trump and the Jews, David Horowitz Is Right
Next Post:
Songbird McCain Introduces Provision to Include Women in Registration for Military Draft