Has the U.S. economy gotten better over the past six months or has it gotten worse?  In this article, you will find solid proof that the U.S. economy has continued to get worse over the past six months.  Unfortunately, most people seem to think that since the stock market has rebounded significantly in recent weeks that everything must be okay, but of course that is not true at all.  If you look at a chart of the Dow, a very ominous head and shoulders pattern is forming, and all of the economic fundamentals are screaming that big trouble is ahead.  When Donald Trump told the Washington Post that we are heading for a “very massive recession,” he wasn’t just making stuff up.  We are already seeing lots of things happen that never take place outside of a recession, and the U.S. economy has already been sliding downhill fairly rapidly over the past several months.  With all that being said, the following are 19 facts that prove things in America are worse than they were six months ago…

#1 U.S. factory orders have now declined on a year over year basis for 16 months in a row.  As Zero Hedge has noted, in the post-World War II era this has never happened outside of a recession…

In 60 years, the US economy has not suffered a 16-month continuous YoY drop in Factory orders without being in recession. Moments ago the Department of Commerce confirmed that this is precisely what the US economy did, when factory orders not only dropped for the 16th consecutive month Y/Y, after declining 1.7% from last month

#2 Factory orders have now reached the lowest level that we have seen since the summer of 2011.

#3 It is being projected that corporate earnings will be down 8.5 percent for the first quarter of 2016 compared to one year ago.  This will be the fourth quarter in a row that we have seen year over year declines, and the last time that happened was during the last recession.

#4 Total business sales have fallen 5 percent since the peak in mid-2014.

#6 Corporate debt defaults have soared to the highest level that we have seen since 2009.

#7 The average rating on U.S. corporate debt has fallen to “BB,” which is lower than it has been at any point since the last financial crisis.

#9 51 oil and gas drillers in North America have filed for bankruptcy since the beginning of last year, and according to CNN we could be on the verge of seeing the biggest one yet…

Shale oil driller SandRidge Energy (SD) warned there was “substantial doubt” it would survive the oil downturn. The Oklahoma City company said this week it is exploring a potential Chapter 11 bankruptcy filing.

Based on its $3.6 billion of debt, SandRidge would be the biggest North American oil-focused company to go bust during the current downturn, according to a CNNMoney analysis of stats compiled by law firm Haynes and Boone.

#11 Consumers in the United States accumulated more new credit card debt during the 4th quarter of 2015 than they did during the entire years of 2009, 2010 and 2011 combined.

#12 Existing home sales in the U.S. were down 7.1 percent during the month of February, and this was the biggest decline that we have witnessed in six years.

#13 Subprime auto loan delinquencies have hit their highest level since the last recession.

#14 The Restaurant Performance Index in the U.S. recently dropped to the lowest level that we have seen since 2008.

#15 Major retailers all over the country are shutting down hundreds of stores as the “retail apocalypse” accelerates.

#17 Since peaking during the 3rd quarter of 2014, U.S. exports of goods and services have been steadily declining.  This is something that we never see outside of a recession… 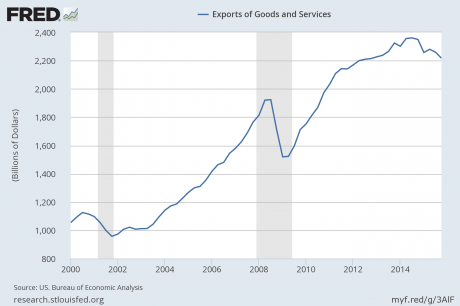 #18 The cost of everything related to medical care just continues to skyrocket even though our wages are stagnating.  According to the Social Security Administration, 51 percent of all American workers make less than $30,000 a year, and yet the cost of medical care just hit a brand new all-time high… 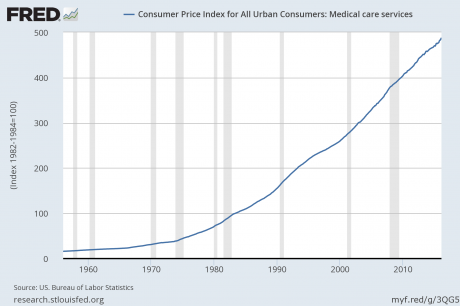 #19 Our government debt continues to spiral out of control.  At this point it is sitting at a staggering total of $19,218,516,838,306.52, but when Barack Obama first entered the White House it was only 10.6 trillion dollars.  That means that our government has been stealing an average of more than 100 million dollars an hour from future generations of Americans every single hour of every single day since Barack Obama was inaugurated… 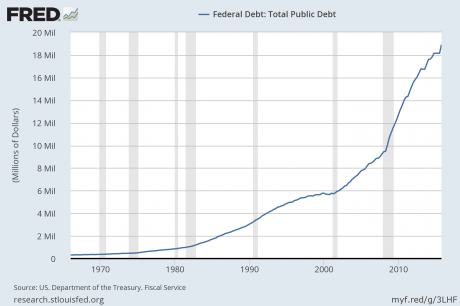 How in the world can anyone look at those numbers and suggest that everything is okay?

I simply do not understand how that could be possible.

Part of the problem is that Americans have been trained to be irrationally optimistic.  It is fine to have an optimistic outlook on life, but when it causes you to throw logic and reason out the window that is not good.

For example, you can be “optimistic” about your ability to fly all you want, but if you step off a 10 story building you are going to take a very hard fall to the ground.

Similarly, you can ignore all of the facts and pretend that our economic prosperity is sustainable all you want, but it won’t change the fundamental laws of economics.

On a personal note, I would like to thank everyone that has helped make my new book the #1 new release in Christian eschatology on Amazon.com.  I understand that a lot of my secular readers are not going to understand my fascination with Bible prophecy, and that is okay.  I felt that I needed to write this book to address some very serious errors that are being taught in churches all over America today, and I also wanted to inspire believers to face the great hardships and persecution that are coming.

Just because very difficult times are approaching does not mean that it will be time to run and hide.  My wife and I always live our lives with no fear, and when things get crazy we believe that it will be an opportunity to do even more good.  We believe that the greatest chapters of our lives are still ahead of us, and we want people to understand why they can look forward to the future even though great darkness is rising all around us.

So yes, I definitely carry a message of warning.

But I also bring a message of hope.

As we look toward the future, there is much to be concerned about, but there are also things happening that are worth getting extremely excited about.

It is when times are the darkest that the light is needed the most, and very soon light will be greatly, greatly needed in the United States of America.

Don't forget to like SonsOfLibertyMedia.com on Facebook and Twitter.
The opinions expressed in each article are the opinions of the author alone and do not necessarily reflect those of SonsOfLibertyMedia.com.
Previous Post:
Supreme Court Rules that Illegal Aliens and Non-Citizens Can be Counted in Redistricting Case
Next Post:
The Slippery Slope: It’s Not Just the Unborn Being Denied Rights Under the Constitution