25 Cities On the Brink of Disaster: “Don’t Be Here When Things Get Violent, Unsafe and Fragile”

The 21st Century is inching ever closer towards chaos… and the time to get out of the big city is upon us.

With economic conditions, growing crises, desperate populations looking to scratch by, and more hatred and division than at any previous point in American history, the city has become a dangerous and unruly setting – and finding yourself in one that is falling apart could be the worst mistake you ever make.

People are living in bigger urban zones than ever before… these megacities are the hotspots of global activity. But many are also proving to be the most dangerous place to be in a collapse. Crime is rampant, order is shaken and many people become willing to take advantage of the situation. Many areas are vulnerable to natural disasters, and have already lost control during past emergencies.

In other places, widespread unemployment is simply taking its toll through increases in theft and violence. Whatever the reason, there are many places where things are falling apart, badly.

As Wired reported, disaster is looming on a worldwide basis, but some are approaching total collapse, thanks to a storm of factors:

Using data on 2,100 cities, Robert Muggah has found which factors make an area more likely to become violent, unsafe and fragile. The data show 30 cities on the brink of disaster and what could cause it. 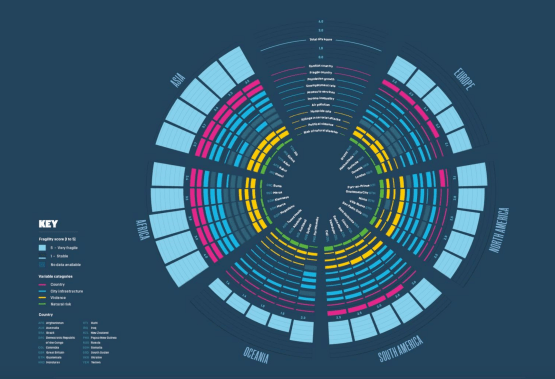 Natural disaster has proved very disruptive lately, as tsunamis and earthquakes have recently devastated New Zealand and rattled nearby Australia. Though things are fairly stable in these Western democracies, their geographical vulnerability to serious tectonic activity makes their civilization far than stable.Auckland, New Zealand made the list for risky cities.

But Haiti was even harder hit. The 2010 earthquake caused widespread devastation in a place that was already one of the poorest on the planet. The 2016 hurricane in Haiti proved that despite billions of dollars in donation, philanthropy and intervention by the likes of the Clinton Foundation, Haiti was still extremely vulnerable. Hundreds of thousands of people were once again displaced as their homes were destroyed; local governments and global NGOs did little to nothing to secure basic necessities, and the place remains one crisis away from total instability. Port-au-Prince, the capital and most populous city there is already a very risky and poverty prone place, and could become much worse in the wake of a disaster.

Of course, any number of urban areas in the war-torn Middle East and perpetual conflict zones of Africa has also made for very dangerous cities, with populations on the brink of disaster, and many individuals vulnerable to crime and violence on a daily basis. Ibb, Yemen, Kirkuk, Iraq, Aden, Yemen, Kabul, Afghanistan and Mosul, Iraq have become some of the worst locales, along with cities spread across the Congo, Mogadishu, Somalia and other highly disputed areas.

Brazil’s megacities are so saturated with the urban poor, and short on basic resources including drinking water, they literally millions of people are on the brink. Riots are possible, and a survival crisis could factor in for Sao Paolo, where 8 million people are at risk of having no access to water. Predictably, many cities in Colombia remain extremely fragile due to the ongoing drug war conflicts that have claimed lives, and left millions of people at the mercy of gang rule.

Venezuela has proven to be a special case, of near precision collapse, as its currency tanks and economic warfare brings people to their knees as they are forced to wait in line for rations, trade on the black market and deal in worthless cash. Socialism has worsened the problems created by the emergency drop in the oil prices. Caracas remains the biggest pool of hungry, poor and increasingly fed up people.

Guatamala City, Mixco and Villa Neuva, Guetemala as well as San Pedro Sula, Honduras were identified as particularly vulnerable cities in Central America, as refugees continue to seek amnesty in the United States to escape the ongoing turmoil in their own countries.

Perhaps surprising to some, many major European cities are quite vulnerable as well to global economic pressures via sharp increases in immigration, “rape” scandals and social concerns about terrorism.

London, UK is one of the wealthiest cities, and yet it faces enormous pressures from overwhelming immigration, from growing economic disparity and from cultural clashes, threats of terrorism – and now, fighting between political factions over Brexit and other issues.

The Eastern bloc is especially vulnerable to these pressures that could lead to a growing unrest. France, Germany, Sweden and Norway also face major instability over immigration and cultural issues.

But some of the most unstable cities on the planet rank among those in the United States.

Places like Baltimore, Detroit, Washington D.C., New York, Philadelphiaand other cities across the map are still deeply divided often police and race issues. Many have seen serious riots, looting and unrest. These social wedge issues are still being pushed from moneyed political interests, while political divide after the direction of the country has become sharp.

Dallas, Texas just suspended pension payments for some of its civil servants, a sign that financial insolvency could create an epidemic during the next crisis. Several states, like California, have over promised benefits to state employees in the pension programs, without ever planning to pay for them. If people lose it, Los Angeles, San Francisco, San Diego and the whole of the surrounding areas could simply erupt. Similar problems have left Detroit, Michigan and Puerto Rico, the commonwealth island, extremely vulnerable to bankruptcy and economic apocalypse that could contaminate the nation and global within hours.

If a natural disaster, such as a hurricane, hits the East or Gulf Coast, tens of millions of people could be caught up in traffic, locked in cities without food, and desperate to cling to order and survive. Likewise, if a major earthquake hit the West Coast, millions could be displaced and left without many options. That’s when things turn ugly.

The world is reaching a tipping point, and much chaos and instability could come crashing down anytime now. Many cities have made themselves open targets for collapse, with economic normalcy already hanging by a thread and populations already restless and growing increasingly discontent.

Be prepared. These things are building, and there are quite a few places you’d rather not be when the SHTF.

Don't forget to like SonsOfLibertyMedia.com on Facebook and Twitter.
The opinions expressed in each article are the opinions of the author alone and do not necessarily reflect those of SonsOfLibertyMedia.com.
Previous Post:
Sharia: Saudi Woman Doesn’t Wear Hijab – Arrested and Faces Lashing
Next Post:
14 Signs That There Is A Plot To Use Russia As An Excuse To Steal The Presidency From Trump On December 19th Or January 6th