And this is only a very small percentage of deaths. The vast majority are never reported to the Vaccine Adverse Effects Reporting System. Yet, the numbers don’t lie. In a little over 4 months, there have been more reported deaths following the experimental COVID injections promoted as “safe and effective” than there were in the previous 13+ years. 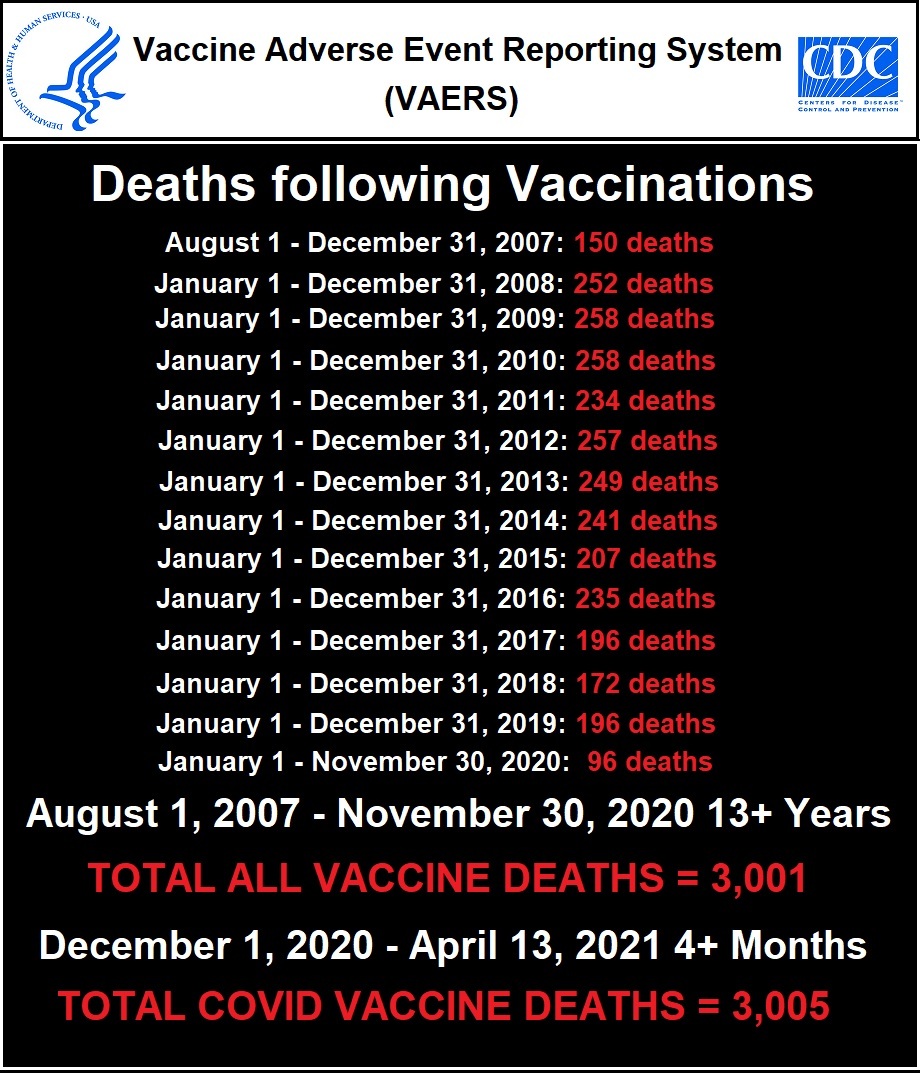 The CDC announced today that deaths reported to the Vaccine Adverse Event Reporting System (VAERS), a U.S. Government funded database that tracks injuries and deaths caused by vaccines, following experimental COVID injections, have now surpassed 3000 deaths since December of 2020, when the Pfizer and Moderna mRNA COVID shots were given emergency use authorization (EUA) by the FDA.

This was reported on the CDC website today, on their “Selected Adverse Events Reported after COVID-19 Vaccination” page.

They report that 3,005 people have now died following COVID-19 experimental “vaccines.” (Note: not all of these deaths they are reporting have been entered into the VAERS database yet. Additional data is entered into VAERS every Friday.)

The CDC wants the public to think that this is an insignificant number, since over 189 million doses of COVID-19 emergency use injections have now been administered to the public.

But to put this into perspective, these 3,005 deaths now exceed the total number of deaths following ALL vaccinations from August of 2007, through the end of November, 2020, just before the experimental COVID shots started.

That is a time period of over 13 years, with 3,001 deaths following ALL vaccinations administered during that time frame. 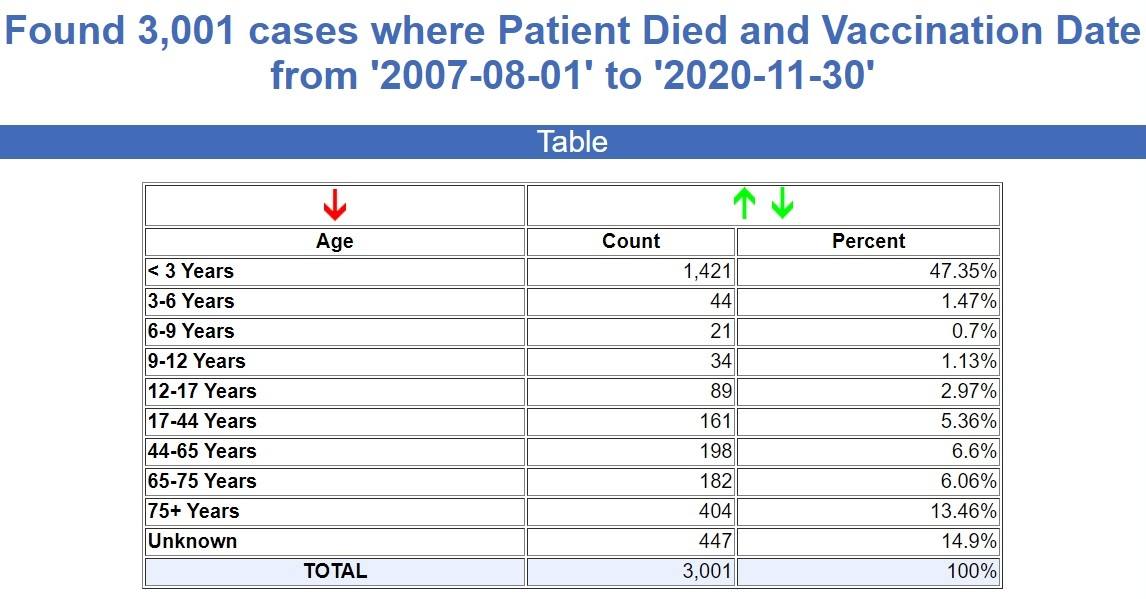 And what’s the problem with VAERS? Take a look at this short piece from 2009 on MSNBC to see how the fox is in the hen house and how VAERS is only giving us a very small look at the actual numbers.

Of course, the CDC continues to look the other way from what is obviously going on and declare, “A review of available clinical information including death certificates, autopsy, and medical records revealed no evidence that vaccination contributed to patient deaths.”

Liars! One and all! It doesn’t take a rocket scientist or in this case, a virologist, to put two and two together with what is going on here. The CDC is in bed with Big Pharma and corrupt politicians, along with the mainstream media. They need to be disbanded, the Big Pharma criminals arrested and prosecuted, along with any politicians who took money in any form from Big Pharma. Oh, and let’s not forget to deal with the fraudulent media that puts out ads for their poisons while demonizing actual elements that heal.

The narrative of “safe and effective” can no longer be maintained. These vaccines are the weapon for genocide.

While the CDC and FDA have put a temporary halt to the Johnson & Johnson experimental jab due to blood clots in the brain, don’t expect that to stick. After all, they are the pimps for Big Pharma to move their products on the ignorant in the populace.

Furthermore, who in their right mind would trust a company like Johnson & Johnson that knowingly put carcinogens in their baby powder, resulting in untold numbers of cancers, sicknesses and deaths?

In writing about the deaths following the experimental COVID shots, Brian Shilhavy points out that “blood clots are not the most common injuries being recorded.”

But these blood clot “clusters” are reportedly so rare among the general population, especially in the kind of clusters seen following J&J injections, that almost everything else has been ruled out, leaving the “vaccines” as the most likely cause.

Don’t expect the FDA to permanently stop the J&J injections, however. They are going to revise the guidelines given to healthcare people giving the J&J shots, so they know how to better treat these blood clots when they see them.

Since they are so rare and apparently unique to the AstraZeneca and J&J adenovirus “vaccines,” this will probably be viewed as another opportunity for Big Pharma to develop more new drugs to treat these unique blood clots.

And there were major supply issues in the U.S. for the J&J doses, so this will now allow U.S. COVID mass vaccination plans to use more of the Pfizer and Moderna experimental mRNA shots.

Look, if you wouldn’t play Russian Roulette with a revolver with 5 or 6 shots in it, why in the world would you play it with a syringe that has one? In my opinion, you’re a special kind of stupid if you do. You’ve been warned.

Don't forget to like SonsOfLibertyMedia.com on Facebook and Twitter.
The opinions expressed in each article are the opinions of the author alone and do not necessarily reflect those of SonsOfLibertyMedia.com.
Previous Post:
20-Year-Old Scottish Man Dead Within 12 Hours Of Pfizer Experimental COVID Injection
Next Post:
Mind-Bending: It’s Not Just Being Used By The CIA Anymore – Your Brain’s Worth $6 Billion To Indoctrinators

Cartoon of the Day: In The Way
August 13th, 2022 Conservative Firing Line