The price of freedom is high.  Most don’t contemplate that price, let alone understand it.  Yet, one such man in Iran not only knows the price, but is set to pay for it with his life, and all he’s asking for is the opportunity to see his infant daughter one last time.

Iran-HRM has the story of 34-year-old Hassan Firouzi’s quest to see his baby girl just one final time before he is executed by the Islamic government of Iran.

Hassan Firouzi, 34, the father of a newborn girl was arrested by Iran’s security forces during nationwide protests on October 27, 2022, in his hometown Shahr-e Ray. He took part in protests that occurred on Enghelab Street in Tehran.

His baby daughter, Hannaneh, was only 18 days old at the time of his arrest. Hassan Firouzi now faces the death penalty. In his last call from Evin Prison, Hassan asked the Iranian people to do anything possible for him to see his daughter one last time. He said, “Do something so I can see my daughter once again. Whether I sign or not (confirm the charges), they will kill me. I want to see my daughter for the last time. I saw her for only 18 days, and I miss her so much. My only wish is to see her before they do anything to me.”

Hassan Firouzi’s family inquired at Evin Prison the same day of his arrest. Prison officials told the family, “The death sentence has been issued for him and referred to the Implementation Department. We will wait until his physical condition improves but you do not need to come again. We will inform you a day before his execution.” 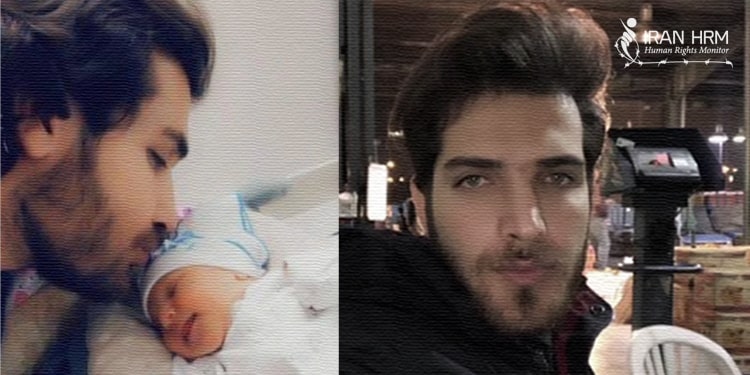 Hassan Firouzi has been unfairly tried and sentenced to death by the court in Shahr-e Rey’s Hadi Saei Square. The acting prosecutor is known to be the same person who presided over slain Mohsen Shekari’s trial. Hassan Firouzi was charged for “leading protests, propaganda against the state, and disturbing public security.” Hassan was charged with Moharebeh (War on God) and sentenced to death.

Hassan Firouzi suffers from internal bleeding due to severe torture and has been forced to confess to being a leader during the protests.

Hassan Firouzi’s left kidney was destroyed under torture by harsh blows using the chair leg. Hassan’s internal bleeding was deliberately left unattended by prison officials. Evin’s wardens kept him in solitary confinement without any care. Hassan was hospitalized on December 14, 2022. Despite the urgent need for surgery stated by doctors he was brutally taken back to prison. Intelligence agents affiliated with the Iranian Revolutionary Guards-IRGC attacked the hospital and kidnapped Hassan.

Pictures of his torture have leaked indicating how Iran’s interrogators have physically harmed him for obtaining a forced confession. The Firouzi family has been threatened to remain silent or it will become worse for them! The photographs present obvious torture marks on Hassan’s face and body. The bruising around his neck proves he was taken for mock execution. Prison officials had put the noose around his neck to torture him.

Hassan Firouzi was also detained in November 2019 protests. In an audio file, he said he has been charged with false accusations. Hassan said he was simply taking part in street protests like others. He explained how his belongings and property, which was not much, had been confiscated by the authorities. Neighboring witnesses claimed Hassan Firouzi’s house was sealed off by government agents and his family was immediately evacuated and told to leave their home.

Hassan Firoozi had initially been released on bail and arrested again on November 26, 2022. In a video, he is kissing his daughter’s cheeks. The video is referred to as Hassan’s last kiss with his baby girl.

Hassan’s wife, Masoumeh, has said that Hassan’s life is in danger and that his family has stopped hoping for his survival. His parents mourn him at home every day. Iran’s authorities have also arrested Masoumeh on January 5, 2023, while she pursued Hassan’s conditions.

The family was informed by prison authorities that their son, Hassan Firouzi, had attempted suicide in prison and that they prevented it. Hassan had clearly stated in a message that he had no intention of committing suicide. He said he would do his best to survive because of his daughter. Hassan Firouzi’s life is now severely at risk of execution and his family is also in a very difficult situation.

We call on the United Nations Human Rights Council and all Human Rights entities to take immediate action to stop these crimes in Iran.

See?  It’s not the people of Iran that are the problem, it’s their fanatical adherents to Islam, Muhammad and Allah.  They are just as maniacal as those in DC who support the murder of the unborn, or those that manage that murder of the unborn.  I hope that Hassan might come to faith in the Lord Jesus Christ, bear witness of that faith, and I do pray that he be delivered from his oppressors.  However, if not, I do hope that he gets to see his precious child before they murder him.  God is watching and He will hold them accountable.

Don't forget to like SonsOfLibertyMedia.com on Facebook and Twitter.
The opinions expressed in each article are the opinions of the author alone and do not necessarily reflect those of SonsOfLibertyMedia.com.
Previous Post:
Human Sacrifice: Lives Lost To Vaccine Profiteering (Video)
Next Post:
Exposing The UN’s Declaration of War on ‘Dangerous’ Conspiracy Theories (Video)