Well, let’s hope they mean what they wrote because the fraud and traitor-in-chief has already made multiple overreaches in the people’s White House, along with his accomplice, Kamala Harris.  Yet, six state attorney generals banded together to sign a letter to China Joe Biden warning him of “presidential” duties.

“We stand ready to meet with your administration to discuss more how the issues below affect our States; litigation is never first option, and we would like to help your team in its important job on behalf of all Americans, consistent with the Constitution and the rule of law,” West Virginia Attorney General Patrick Morrisey wrote in the letter addressed to the White House.

“Yet if you sign unconstitutional laws passed by Congress, it will be our responsibility and duty to challenge those laws in court,” the letter continued.  “If cabinet officials, executive officers, and agencies go beyond the bounds of their statutory authority, fail to follow legally required procedures, or fall short of the bedrock Administrative Procedure Act obligation of reasoned decision making, it will likewise be our responsibility to take action.”

The particular act mentioned has often been used to challenge executive branch rules and regulations.

While that should be done, the AGs should be urging their state legislatures to nullify those overreaches, rending them worthless and without teeth.  They should also be providing arrest provisions for any and all federal agents who attempt to enforce those rules and regulations.

Morrisey is joined by AGs from Arkansas, Indiana, Mississippi, Montana, and Texas.

It [the letter] comes as Biden issued a series of executive orders in his first week since taking office. Some of the executive orders have overturned Trump-era policies, while others have established or expanded policies relating to climate change, racial equity, and the CCP (Chinese Communist Party) virus pandemic.

Some of the orders have already drawn widespread scrutiny, such as the decisions to rejoin the Paris Climate agreement and to cancel the Keystone XL Pipeline, which is expected to put thousands of jobs at risk and undermine the U.S. relationship with Canada. The Biden admin has also met with backlash for embracing a quasi-Marxist critical race theory in its policies seeking to prioritize certain racial groups that have historically met with disadvantage over others.

Similarly, Biden’s order addressing discrimination on the basis of gender identity and sexual orientation is expected to threaten the constitutional freedom to exercise one’s religious beliefs for individuals and organizations who affirm the traditional understanding of human persons as created biologically male and female.

“The President cannot cut constitutional corners or shirk statutory strictures without inevitably doing more harm to our country than good,” the AGs wrote. “The foundations of our republic and American life are embedded within our Constitution’s carefully crafted design.

“Accordingly, today by this letter we respectfully urge you when pursuing your policy priorities to honor the core constitutional tenets which should be appreciated and respected by every person entrusted with the honor and burdens of the presidency,” the letter concluded.

Don't forget to like SonsOfLibertyMedia.com on Facebook, Google+, & Twitter.
The opinions expressed in each article are the opinions of the author alone and do not necessarily reflect those of SonsOfLibertyMedia.com.
Previous Post:
China Begins “Dress Rehearsal” For Overtaking US Following New Trade Deal With EU
Next Post:
If SARS-CoV-2 Has Never Been Proven To Exist, Why Are People Dying? 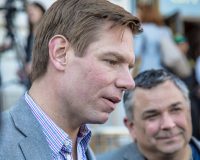 If Nazi & Bomb Making Books Can Openly Sell On Ebay, Why Did They Cancel Dr. Seuss?
March 5th, 2021 Sons of Liberty Media