No, this is not Jake Tapper’s former producer.  It’s another CNN pedophile that’s on the hot seat after pleading guilty to attempting to entice a 9-year-old girl into sex.

Former CNN producer John Griffin, who worked ‘shoulder to shoulder’ with Chris Cuomo, pleaded guilty on Monday in federal court to using interstate commerce to entice and coerce a 9-year-old girl to engage in sexual activity at his Vermont ski house.

This is a different CNN pedophile than Jake Tapper’s former producer, Rick Saleeby, who resigned after it emerged that he solicited sexually explicit photos of an underage girl.

Griffin admitted to meeting the girl’s mother on a website during the summer of 2020, after which he persuaded her to bring the 9-year-old child to his Ludlow, Vermont ski home for illegal sexual activity, AP reports.

According to the Daily Mail, Griffin ‘used Google Hangouts and Kik to convince the mothers that a “woman is a woman regardless of her age,” and that “women should be sexually subservient and inferior to men,” according to the indictment.

In June of 2020, Griffin advised a mother of 9- and 13-year-old daughters that the mother’s responsibility was to see that her older daughter was “trained properly.” Griffin later transferred over $3,000 to the mother for plane tickets so the mother and her 9-year-old daughter could fly from Nevada to Boston’s Logan airport. The mother and child flew to Boston in July of 2020, where Griffin picked them up in his Tesla and drove them to his Ludlow house. At the house, the daughter was directed to engage in, and did engage in, unlawful sexual activity.

Reading this indictment will make you sick to your stomach pic.twitter.com/61FugCnJNg

Griffin, who originally pleaded not guilty to three counts, was arrested on Dec. 10, 2021, a day after he was indicted by a grand jury. He worked for CNN for around eight years, and was fired following his arrest. 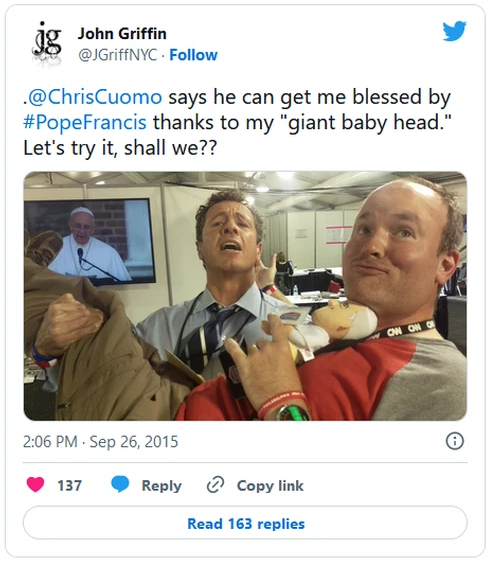 Griffin also allegedly attempted to entice two other children over the internet to engage in sexual activity – proposing a “virtual training session” in a video chat in April 2020 which would involve instructing a mother and her 14-year-old daughter to get naked and touch each other at his direction.

In June 2020, Griffin proposed to the purported mother of a 16-year-old that she take a “little mother-daughter trip” to his ski house for sexual training involving the minor.

Griffin faces 10 years to life in prison when he’s sentenced on March 20, 2023, and must pay full restitution to the victims – an amount which is yet-to-be determined by the court. He also faces a $250,000 fine and other fees, and has agreed to forfeit his Tesla, electronics, and donate half the proceeds from his home in Vermont – and a Mercedes Benz, into the court registry.

Don't forget to like SonsOfLibertyMedia.com on Facebook and Twitter.
The opinions expressed in each article are the opinions of the author alone and do not necessarily reflect those of SonsOfLibertyMedia.com.
Previous Post:
Kate Shemirani: Genomics, Eugenics & CRISPR (Video)
Next Post:
Biden Reinstates Security Clearance of Physicist Who Passed Nuke Secrets to USSR