The drone footage that you are about to see is absolutely jaw-dropping.  When I first watched it, I could hardly believe the extent of the devastation that has taken place on Japan’s southern island.  Near the end of last week, a magnitude 6.5 earthquake was quickly followed by a magnitude 7.3 earthquake just 28 hours later.  Those earthquakes made headlines all over the globe, but at first glance those numbers don’t really look that big.  So why was there such tremendous damage?  Well, it turns out that those two major quakes worked in conjunction with more than 600 smaller quakes to cause historic devastation all across Kyushu.  As you are about to see, giant fissures have opened up in the ground right along a fault line that runs directly across Japan’s southern island, and this has a lot of people extremely alarmed.

Once a major disaster falls out of the news, the rest of the world tends to forget about it, but for those on Kyushu this crisis is far from over.  Authorities are still scrambling to rescue those that have been stranded by the recent earthquakes, and at this point it is a race against time…

Survivors of a series of Japanese quakes are struggling with food and water shortages with rescuers digging through mud and rubble for the missing.

Two major earthquakes and about 600 smaller tremors have rocked the south-western island of Kyushu since late Thursday, leaving a total of 46 people dead and more than 1,000 injured, 208 of them seriously.

Many who abandoned their damaged or destroyed homes have had to sleep in temporary accommodation, huddle in makeshift shelters or sleep in their cars, and local media have reported problems in delivering food and other essentials.

In a previous article that I posted a few days ago, I shared a map from the USGS that showed all of the significant earthquakes on Kyushu over the previous week.  As you can see, they formed something of a straight line right across the island… 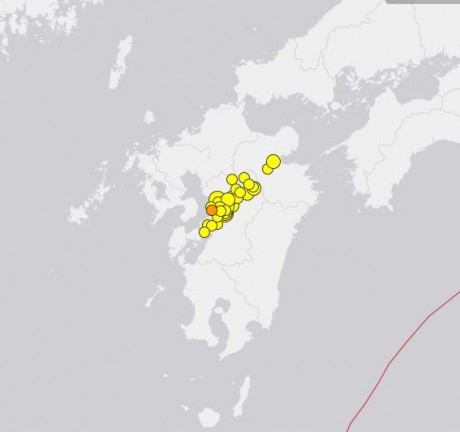 Earlier today, I went to the USGS website once again and pulled up all of the significant earthquakes on Kyushu over the past week.  So the following map contains the most updated information for the past seven days, and once again we see essentially the exact same formation… 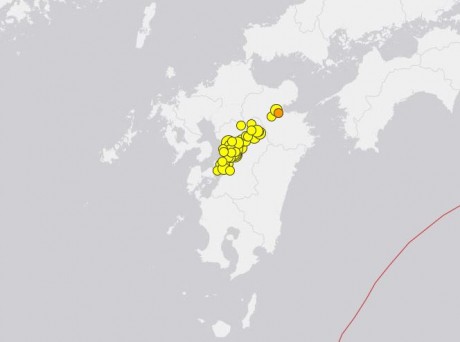 All of these earthquakes have been happening along a major fault line, and there is speculation that Japan’s southern island of Kyushu may be starting to break apart along that fault line.

Of course this kind of thing has happened a lot in the history of our planet, but nobody is quite sure what that might mean for Kyushu.

Are we witnessing the beginning of a process that could take decades to complete, or could it be possible that things might unfold much, much faster than that?

The reason why I shared all of this with you first is so that you can put the following footage in proper context.  This apocalyptic drone footage that you are about to see from Kyushu was all filmed along this fault line.  In all of my days, I have never seen anything quite like this…

Some of the shots in the video look like they come straight out of a Hollywood disaster movie.  The truth is that the damage that has been done is a whole lot more serious than the numbers “6.5” and “7.3” suggest.  The geography of Japan’s southern island is being fundamentally altered, and this is going to have dramatic consequences for millions of ordinary Japanese citizens.

And of course what is happening in Japan is just part of the great shaking that we have seen all over the planet in recent weeks.  This was the primary topic for the latest episode of our new television show that you can view for free right here…

Most of the big earthquakes that we have witnessed in recent weeks have been along the Ring of Fire which roughly encircles the Pacific Ocean.  Approximately 90 percent of all global earthquakes and approximately 75 percent of all global volcanic eruptions each year occur along the Ring of Fire, and many scientists are becoming extremely alarmed that it is becoming much more seismically active once again.

Of course the west coast of the United States sits directly along the Ring of Fire, and experts tell us that the San Andreas Fault and the Cascadia Subduction Zone are both way overdue for a major earthquake.

In addition, Mt. Rainier and a whole host of other once active volcanoes are located along the west coast as well.  Even a single major eruption would cause tremendous chaos, death and devastation, and fragile financial markets would likely crash very hard all over the world.

So what has been happening in Japan and Ecuador and other places along the Ring of Fire has tremendous implications for those of us living in the United States.

Let us pray that the shaking starts to settle down, but let us also be prepared for what might happen if it doesn’t.

Article reposted with permission from End of the American Dream.

Don't forget to like SonsOfLibertyMedia.com on Facebook, Google+, & Twitter.
The opinions expressed in each article are the opinions of the author alone and do not necessarily reflect those of SonsOfLibertyMedia.com.
Previous Post:
Shock: Denver Schools To Patrol Students With Military-Style Rifles: “Certainly Ratchets Up A Notch”
Next Post:
Jesse Jackson Ignores Black on Black Crime Greater than War Dead – Demands Close of Chicago’s Homan Square