Are U.S. Officials Required to be Sworn in on the Bible?

(The Olive) Have you ever wondered about the oath of office for U.S. officials? Maybe you wondered at some point if these officials are required to be sworn in using a Bible?

I published on my site an article written by Scott Buss about Vice President Mike Pence swearing into office an open homosexual using the Bible. I share these posts on a relatively new social media site called Gab. One of my fellow “Gabbers” made a comment on the post, to which I replied. Then my fellow Gabber threatened me, and then proceeded to tell me to have a “blessed day brother”! Really? You are no brother of mine with that kind of attitude and behavior. What you don’t see is that Crazzi liked my comment before his reply to me. I must be missing something here… 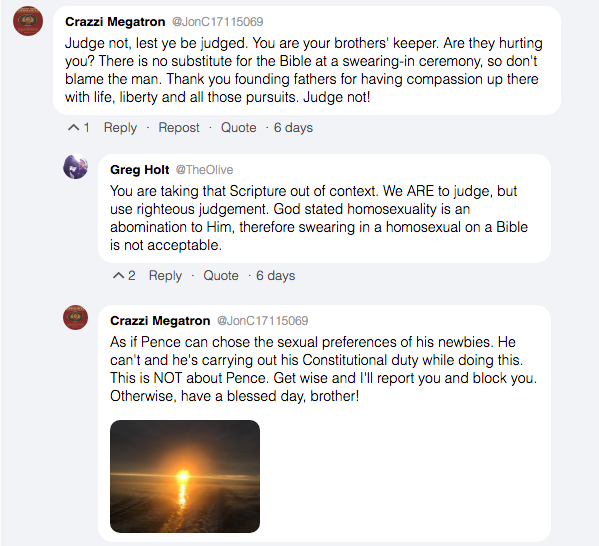 So, I am threatened because I dared to disagree with someone’s opinion? “get wise and I’ll report you and block you,” for what! Having an opinion???

Let’s look at what Crazzi said here, his words in italics:

“There is no substitute for a Bible at a swearing-in ceremony.”

This is categorically untrue; there is absolutely NO requirement for a Bible to be used at a swearing-in ceremony, to wit:

“The Senators and Representatives before mentioned, and the Members of the several State Legislatures, and all executive and judicial Officers, both of the United States and of the several States, shall be bound by Oath or Affirmation, to support this Constitution; but no religious Test shall ever be required as a Qualification to any Office or public Trust under the United States.” U.S. Constitution, Article Six, Clause Three

The requirement is to support and defend the Constitution, not to be sworn in on a Bible. In fact, U.S. president Theodore Roosevelt was sworn in, with no Bible or anything else for that matter – and Representative Keith Ellison of Minnesota was sworn in on a Quran!

“Pence can’t choose the sexual preferences of his newbies.”

That is true, but it does not mean he has to endorse them either. There are others who could have sworn in this man.

“he’s carrying out his constitutional duty while doing this.”

This is mostly true. It is more traditional than anything else that vice presidents do the swearing in. The president can also do them, as can many others duly appointed to do so – see below.

(1) the oath of office required by section 3331 of this title, incident to entrance into the executive branch; or

(2) any other oath required by law in connection with employment in the executive branch.

(2) an individual authorized by local law to administer oaths in the State, District, or territory or possession of the United States where the oath is administered. (source)

As for Crazzi’s “judge not” admonition, well this author is sticking to what he said. The Bible verse being taken out of context here is:

Matthew 7:1 Judge not, that ye be not judged.

SO many Christians take this verse completely out of context, and context is king in the Bible. Taken on its own, it does appear to imply that if you do not judge others, neither will you be judged, however, that is not what this verse teaches.

Let’s look at the next two verses:

Matthew 7:2-3 For with what judgment ye judge, ye shall be judged: and with what measure ye mete, it shall be measured to you again. And why beholdest thou the mote that is in thy brother’s eye, but considerest not the beam that is in thine own eye?

Ahhh, now this makes more sense, judge not without care, lest you be judged using the same criteria. Do not judge someone for what you yourself do. Judge with righteous judgment.

John 7:24 Judge not according to the appearance, but judge righteous judgment.

I like Mike Pence, but that does not mean that I have to support his every action. I do not approve of his swearing in an openly homosexual man using the Bible. This is not about hate for homosexuals as this writer is sure someone will accuse me.  No, it is about disrespecting God. God says homosexuality is an abomination to Him (Leviticus 18:22; Romans 1:26-27).  So, in what conceivable way is it acceptable for a homosexual to be sworn in on God’s very own word?

As I said, this is not about hate; no one should be “hating” homosexuals. God loves all people and desires them to come to Him. Jesus died for us when we were yet His enemies.  If that does not say, “I love you” I don’t know what does. Jesus saves…

UPDATE: Woman Charged With Attempted Murder And Assault With A Deadly Weapon for Plowing Into Trump Supporters- Here’s What We Know…
September 27th, 2020 Right Wing Tribune