Austria: Nine Muslim “refugee” family members gang-rape teacher for two hours, as she pleaded “No, I don’t want this”

A gang of nine Iraqi migrants (all family members) allegedly posed for selfies while they took turns raping a woman after dragging her off the street during New Year’s Eve celebrations in Vienna.

The cultural enrichment visited upon the West by Islam knows no bounds. It will not stop until it dawns upon those with power admit their culpability and resign.

The people who created this disaster (whether politicians, judges, churchmen, administrators or from the media) or not the ones to sort out this mess.

The Muslim family that prays together, rapes together.

With the exception of one confession, none of savages have shown remorse. Because the Qur’an teaches that Infidel women can be lawfully taken for sexual use (cf. its allowance for a man to take “captives of the right hand,” 4:3, 4:24, 23:1-6, 33:50, 70:30). The Qur’an says: “O Prophet, tell your wives and your daughters and the women of the believers to bring down over themselves of their outer garments. That is more suitable that they will be known and not be abused. And ever is Allah Forgiving and Merciful.” (33:59) The implication there is that if women do not cover themselves adequately with their outer garments, they may be abused, and that such abuse would be justified. (source Robert Spencer)

FAMILY OF NINE IRAQI ASYLUM SEEKERS ‘GANG-RAPED DRUNK WOMAN IN AUSTRIA FOR TWO HOURS AS SHE PLEADED “NO, I DON’T WANT THIS” AFTER LURING HER FROM HER FRIENDS ON NEW YEAR’S EVE’

Nine asylum seekers from the same family have gone on trial in the Austrian capital Vienna accused of the New Year’s Eve 2015 gang rape of a 28-year-old German teacher.

Prosecutors charged the Iraqi men with ‘abuse of a defenceless person and rape in a very humiliating and agonising way for the victim.’

At the opening of the trial on Tuesday the court heard how the woman, identified only as Sabine K., was ‘blind drunk’ when she went with the men to an apartment.

Most of the men deny the charges but DNA from six of them was found in or on her body. 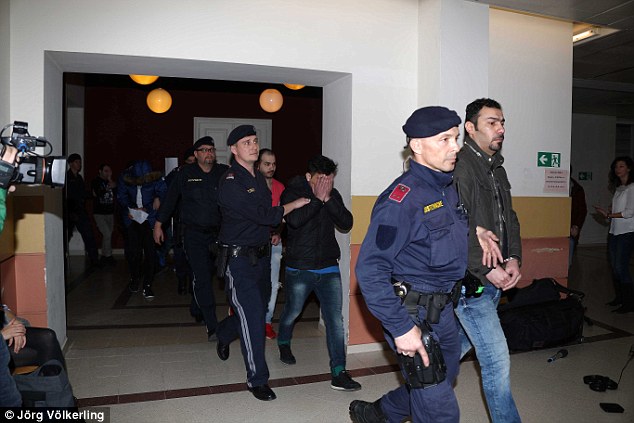 The court heard how the victim arrived in Vienna on December 28 2015 to spend the New Year with a female friend in the city.

Shortly before midnight on December 31 they wandered into the city centre to join milling crowds celebrating the arrival of 2016 and at 2am were seen drinking in a bar-restaurant called Cactus.

Shortly before 3am Sabine’s friend noticed she was no longer there and was told by another patron that the men she had been talking with had ‘taken her away.’

The defendants, aged between 22 and 45, all arrived in Austria between May and December 2015 via the Balkan route. 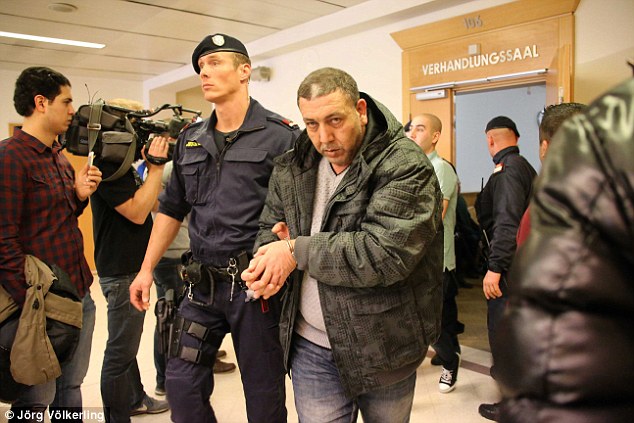 One of the suspects, Sabah Al-J., is brought into the courtroom in handcuffs

At the time of the attack, five of them had cemented their right to stay, the applications of the other four were still pending.

Judge Petra Poschalko heard how the woman was taken by four of them to an apartment in Vienna’s Rustenschacher Allee, where five other men were waiting.

Sabine later said she found herself naked on a double bed being assaulted by the men one after the other.

Her lawyer Karina Fehringer. told the court that she was assaulted in the dark so she could not identify the men.

After the attacks, which went on for several hours, the victim needed in-patient treatment at a trauma clinic and now is under psychiatric care for post traumatic stress disorder.

She had another breakdown at the weekend and was too fragile to be in court to face her attackers.

Only one man, Mohamed Al-A., 31, admitted his role in the rapes and he sobbed in court as he said he was ‘really drunk’ on vodka at the time. 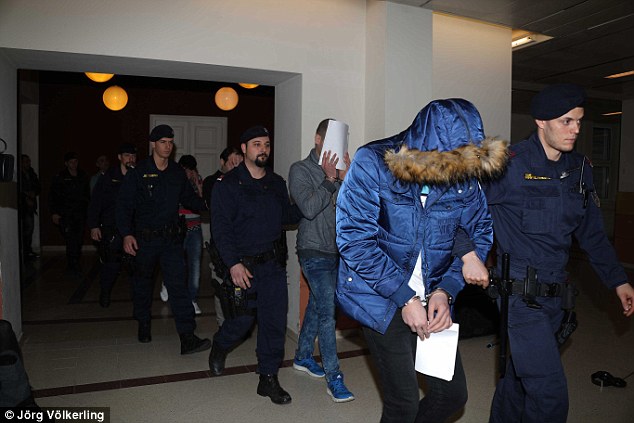 One of the accused, Mohammed Al T., has a hood covering his face and looks to the ground as he is led in to court

His Muslim faith may forbid him to drink alcoholic beverages, but on New Year’s Eve he said he made an exception and drank vodka.

He was with co-defendants Nazar Al-J., Mohammed Al-T. und Alaa Al-J. in the Cactus bar, and the four men are alleged to have taken the victim back to the apartment.

The other defendants – Hader Al-A., Mustafa Al-J., Nael Al-J., Marwan Al-J. und Sabah Al-J. – lay in wait for her there, the court was told.

Medical experts testified she was raped multiple times and sodomised. The victim said she yelled at them, in German: ‘No, I don’t want this.’ Then in English: ‘Listen to me, just a little bit.’

Her attackers conversed only in Arabic. Alaa Al-J. was said to be the rape ringleader. After it was over Mohammed Al-. escorted her to a toilet in the flat where he took a selfie with her on his mobile phone. 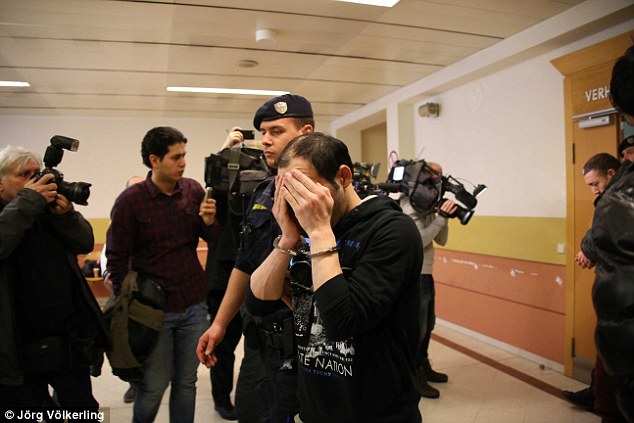 Another suspect, Marwan Al-J, holds his hands to his face as he is led into court in handcuffs

Later he and Alaa Al-J. escorted her to a nearby tram stop where they tried to stem her sobbing by saying in English: ‘Don’t cry.’

After she went to police, a tracking app on her mobile phone led officers to the rape scene. The app showed that her ordeal lasted from 4.20am to 6.20am on January 1 2016.

The court heard that with the exception of the man who confessed, none of the others have shown remorse.

Several denied rape even in the face of the DNA evidence. One man claimed that the woman had been ‘offered’ to them by relatives: another that she was a willing participant in whatever took place.

Judge Poaschalko seemed visibly angered at the shifts in their stories throughout Tuesday’s hearing. The court resumes again on Thursday and sentencing will be handed down on March 6. She has warned them they face up to 15 years each in jail.

Don't forget to like SonsOfLibertyMedia.com on Facebook, Google+, & Twitter.
The opinions expressed in each article are the opinions of the author alone and do not necessarily reflect those of SonsOfLibertyMedia.com.
Previous Post:
Government-Funded Martyrs? ISIS Suicide Bomber “Paid $1.24 Million to Blow Himself Up”
Next Post:
Is it really Racist to be Pro-America?

The Mainstream Media Wants You To Believe That You Voted For Them! Who Is Reporting The Results?
July 27th, 2021 Sons of Liberty Media