The Clintons are connected.

We all know that.

But the Clintons are probably more connected than we will ever know.

If you don’t visit VOAT on a regular basis, you probably should.

This was posted yesterday by a member nicknamed “CLIPTO”…

Editor’s note: Both videos will be embedded at the end of the post

I have uploaded a video (Part 1YouTube & Part 2YouTube) on my YouTube channel and uploaded a supplementary diagram to archive.org in order to make the information in this post more concise and easier to consume.

Bill Clinton appointed Judge Richard M. Berman and Judge Nicholas G. Garaufis to district courts in NY, where they are now presiding over the Epstein and NXIVM trials, respectively. This information is out in the open and in and of itself, would appear to constitute major conflicts of interest regarding two eerily similar and politically stunning sex trafficking cases.

She owns a Manhattan property close to Epstein’s and back in 2015, the UK’s Sunday Times reported that:

Ms Maxwell, 53, was photographed [this] weekend outside her home in New York where she moved after the death of her father, the disgraced newspaper mogul Robert Maxwell, in 1991.

The Manhattan property, which is close to Epstein’s mansion, is owned by Lynn Forester de Rothschild, wife of the British financier Sir Evelyn Robert de Rothschild.

Ghislaine is also a former member of the Clinton Global Initiative according to a 2007 members list.

Epstein was arrested at Teterboro Airport. According to Wikipedia, Rothschild’s father was “president and owner of the General Aviation Aircraft Services, now Meridian, in Teterboro, New Jersey.” It is likely that he would have spent a lot of time working out of Teterboro Airport, although the page source on that has already been 404’d.

In addition to Madame Maxwell, Epstein’s brother, Mark, was also a member of the Clinton Global Initiative in 2007.

According to Harper’s Bazaar, Lynn’s first job after law school was with the firm Simpson Thacher & Bartlett. According to Wikipedia’s list of notable alumni, Cy Vance worked there as well, albeit long before Ghislaine. I only mention this because the name Cy Vance ended up ringing a bell, but I couldn’t remember why. I did a quick search and realized that Vance’s son, Cy Vance, Jr., was not only in the NY Post this week for subpoenaing a Trump organization over the whole Stormy Daniels hush-money fiasco, but he also made the New York Times 3 weeks ago because it was his office who attempted to get Epstein’s sex offender status lowered in New York!

I posted about this a few days ago and included a link to a clip of DershowitzYouTube stating he was introduced to Epstein by Lady Rothschild. I have been speculating that he dropped her name as a way of silently indicating his protected status among the elite.

Long before she married into the Rothschild family, she volunteered on the U.S. Senate campaign of Daniel Patrick Moynihan.According to Politico:

In between studies at Pomona College, a private liberal arts school in Claremont, Calif., and Columbia Law School, she began a long association with Democratic politics, volunteering for the U.S. Senate campaign of Daniel Patrick Moynihan.

If Lynn was born in 1954, then she would be 18 years old (entering college) in 1972. If she spent 4 years at Pomona College, that would bring us to 1976. Moynihan was elected in 1976, so it would reasonable to believe that Lynn volunteered on Moynihan’s very first campaign for Senate. In 1977, Moynihan was a co-chair, along with Jacob K. Javits, of the New York State Alliance to Save Energy. Javits’s executive assistant at the time, Richard M. Berman, was appointed as the executive director of this alliance.

While it seems likely that this appointment was more influenced by Javits, it is quite a coincidence that out of all the judges that could have presided over the Epstein trial, it was Judge Richard M. Berman who was selected. And on top of that, out of all the courthouses this trial could have taken place in, it is currently taking place in the Daniel Patrick Moynihan Courthouse!

At this point, I am sure many of you will want to dig deeper into Judge Richard M. Berman. If you would like a head start, see this videoYouTube I made a few days ago to accompany this Voat post. With the help of a fellow Voat user, I came very close to being able to connect Judge Berman to notorious California pedophile, Harry Baker.

According to her Wikipedia, Rothschild sits on the Board of Bronfman E.L. Rothschild LP. There is no citation for this, but a former CEO confirms both her and Matthew Bronfman as members of the board of directors in an interview with RIABiz.com:

RIABiz: Is this a new position for the company? If yes, why is the position being created now?

Simon: Marilyn’s position is a new one for the company. We have been anxious to grow our presence in New York. Not only does Bronfman Rothschild have a current office in New York, but several of our board members are based there as well, including Matthew Bronfman, Eli Goldstein and Lynn Forester de Rothschild.

The Bronfmans, particularly Sara, Clare, and their father, Edgar, were the principal funders of the NXIVM sex cult that is currently being prosecuted in New York. The three of them also appear on the Clinton Global Initiative members list for 2007.

Judge Garaufis was in the news recently for having ordered a prosecuting lawyer to cease questioning Lauren Salzman after she broke down during the NXIVM trial. How nice of him. Oh, and I almost forgot. Lauren Salzman’s mom, Nancy Salzman, was also a 2007 Clinton Global Initiative member as well.

I am sure there are other connections I have either missed or not found yet. Please comment anything else you end up finding along these lines. Thanks for reading and watching!

Would it surprise you if Bill Clinton was protected from prosecution in these investigations and trials?

If the elite is protected by the justice system surprises you, then you are just not paying attention.

Here are the videos: 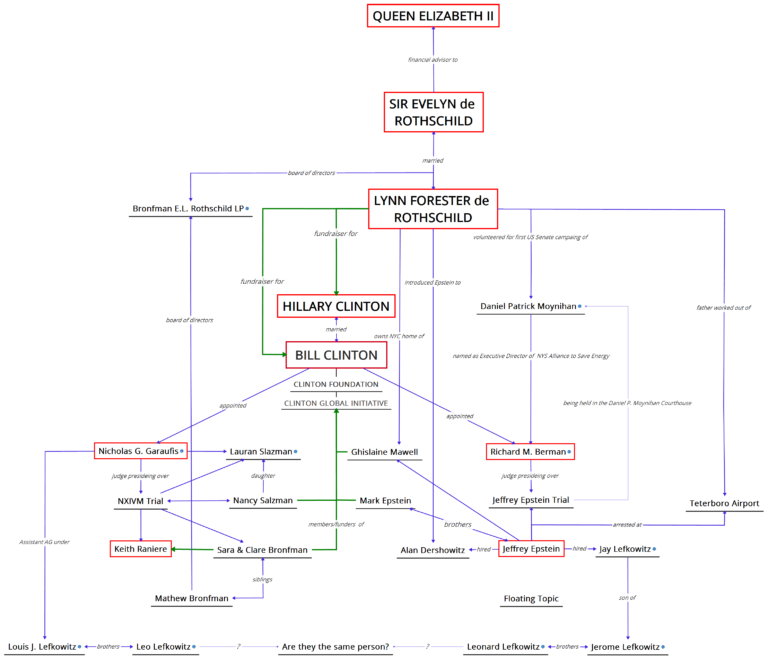 Here are some of our most recent Epstein and NXIVM reports that you might find interesting:

Bill and Hillary are connected to both Raniere and Epstein in so many ways.

But don’t look for them to ever lose a minute of sleep worrying about prosecution that will probably never come.