Bill Introduced To Imprison Governor: It Is Not Enough To Impeach Them – The Message From The American People Must Be Prosecution!

“Man’s commandments produce bondage and injustice in blinding the eyes while encouraging the crime (Soft judges produce hardened criminals), whereas in keeping God’s commandments, it will produce genuine liberty in doing the right things (Liberty is the right to do what the law permits) and a healthy fear in deterring the crimes.”

For far too long Americans have settled for the results of man’s commandments in this country (Mark 7:13). They make God’s commandments void through their own traditions and, in the end, reap the consequences (Psalm 9:16-17).

Americans settle for man’s commandments and, in turn, they receive man’s results.

Americans have allowed their justice system to become a system of injustice, and a system of indulgence where the corrupt have now created a bureaucracy (slave labor) that makes 64 billion dollars a year (Amos 5:7), where your freedom is for sale while leaving off justice, unless you can pay for it (Mark 7:9:11).

If you take the time and examine much of what I just said, you will find it to be true, and if it were not, then why is it that Americans have been desensitized to show more compassion for the criminals than they have for the victims (Matthew 24:12)? Americans have been taught to have pity for the guilty and to have very little to nothing for the victims (Deuteronomy 19:21).

Most Americans have no sense of justice and wonder why they are losing their freedoms (Proverbs 28:5; Isaiah 26:9).

To prove the point, in particular, when it comes to those who are responsible for attacking the innocent in this country and our God-given rights, look to the culprits and to that for which they are responsible.

Politicians are responsible for sanctioning the murder of over 60 million babies (Proverbs 6:17), and they then play the protectors of our lives by attempting to implement that which is unlawful in attacking our God-given rights and unconstitutionally shutting down businesses, issuing illegal mask mandates and telling the people that they are to serve what it is that they can and cannot do, and all the while attempting to wield more control over our lives through their contrived and manufactured lies (Isaiah 28:18; Jeremiah 11:9; John 8:44).

Americans have succumbed and suffered much more abuse than our forefathers ever dreamed (Declaration of Independence); it needs to stop, and now!

One such example of this for the good and after much abuse is a bill introduced that would imprison governor for unilaterally declaring emergencies.

St. Paul, MN – A Minnesota Republican state representative has introduced a bill that would remove the power of the governor to declare peacetime emergency powers. H.F. 2204 would also punish any violation by the governor with imprisonment.

The Unilateral Emergency Powers Repeal Act received praise from Action4Liberty, a group opposed to the restrictions placed by Governor Walz during the pandemic. On their website, the group said:

“We just passed the One Year mark of Governor Walz’ Unilateral Declaration of Emergency Powers. Since March 13th of last year, Walz has abused his powers and destroyed businesses, infringed on civil liberties, and has interfered in our lives at unprecedented levels. For those reasons, our team has one thing to say to him: NEVER AGAIN!

“Governor Walz is crushing our economy and limiting our freedoms by issuing unilateral orders! It’s time to get Minnesota’s economy working again. It’s time to let Minnesota businesses determine how to safely and reasonably open their doors by ending Walz’ destructive emergency powers.”

The group highlighted a section of the bill that adds punishment if the governor violates the emergency orders restrictions. The bill proposes a $1,000 fine or up to 90 days in jail for any governor who violates the new law. The group wrote:

“Chapter 12 law right now states that violators can be punished by a $1,000 fine or 90 days in jail. So, Governor Walz took that part of the law and applied it to violators of his orders. In other words, if you went over to your friend’s home last November against his order, you could’ve been put in jail for 90 days.

“This bill reverses the punishment. Now if the Governor or a government agent violates the law, then they will be punished by a $1,000 fine or 90 days in jail, not you. This would put Walz behind bars if he did this again.” 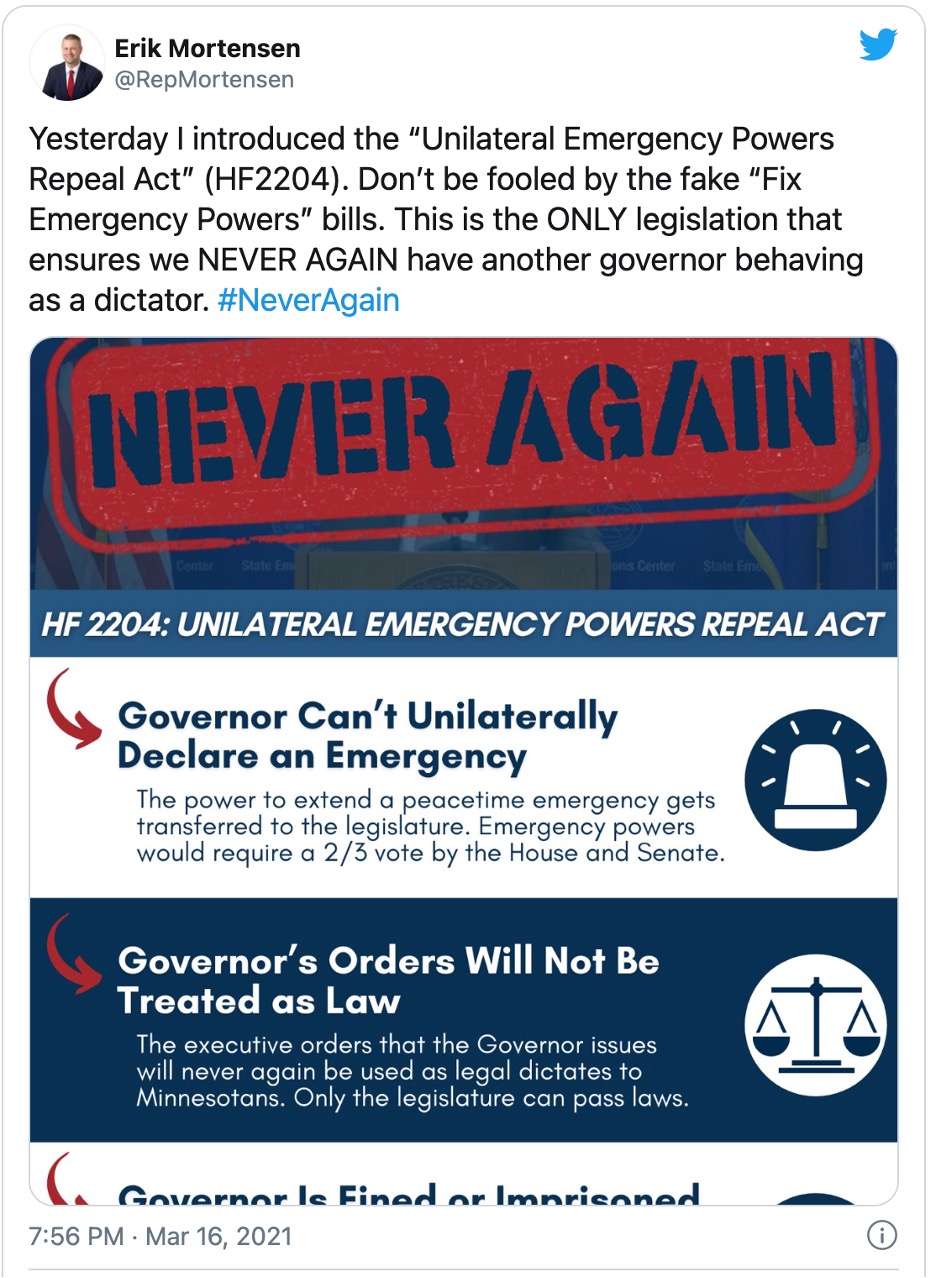 Rep. Erik Mortensen (R-Shakopee) introduced the Unilateral Emergency Powers Repeal Act on Thursday. The bill would require a two-thirds majority vote from the state House and Senate to declare a peacetime emergency.

The bill would prevent the Governor from unilaterally declaring a peacetime state of emergency or issuing executive orders that are considered law.

Mortensen said in an email to The Tennessee Star:

“By unilaterally declaring emergency powers, Walz completely eradicated our republican form of government and started becoming the supreme lawmaker of the land.” 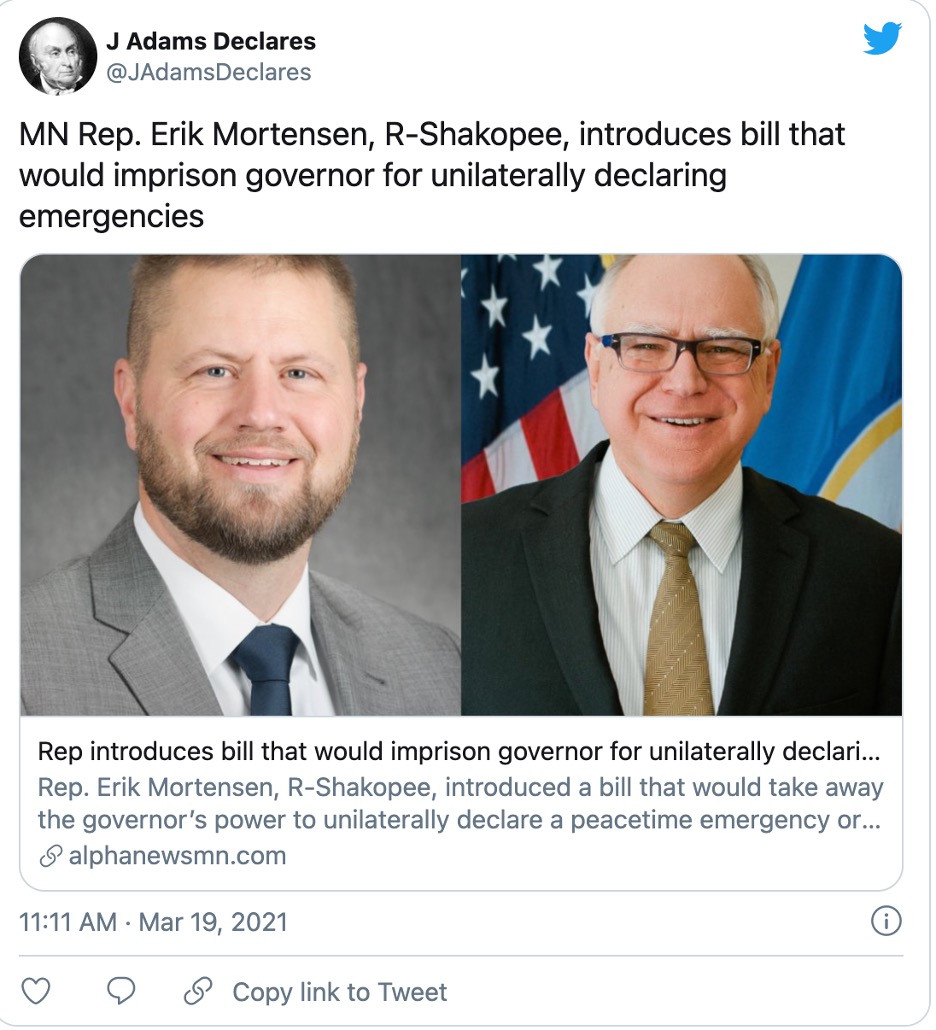 Erik Mortensen stated “In the last year, we’ve been locked in our homes, had our economy shut down, been forced to wear masks, and watched as COVID-positive patients were brought into nursing homes. All because one man decreed it from St. Paul.”

The bill, co-sponsored by Rep. Jeremy Munson (R-Lake Crystal), states that nothing “authorizes the governor or the state director to infringe on the rights of the people in the state.” The bill specifies that an emergency can only be declared by the legislature.

The wording of the bill includes a list of rights that people cannot have taken away by emergency order including the right to free speech, the right to exercise religious beliefs, the right to assemble, the right to keep and bear arms, the freedom of travel, the right to operate a business or earn income.

Conclusion: If you want to make America great again, then do what the Lord commanded long ago because politicians are not appointed to tear down the Constitution and its laws, rather they are entrusted to uphold and to enforce them (Psalm 94:16)! Politicians are not above the law and the people in Minnesota are starting to remind them of this very fact.

Remember, justice guards our liberties as does it save our Republic if we simply obey the Lawgiver (Exodus 18:21).  Amen!

Don't forget to like SonsOfLibertyMedia.com on Facebook and Twitter.
The opinions expressed in each article are the opinions of the author alone and do not necessarily reflect those of SonsOfLibertyMedia.com.
Previous Post:
Dr. Sherri Tenpenny: COVID Was Created To Scare World To Take Injection That Will Kill Them (Video)
Next Post:
Amnesty International: Facebook Plan To Target Children “Incompatible With Human Rights”