Bodybuilder Doug Brignole To Anti-Vaxxers: “People Can Use Me as a Test — If I Die, You Were Right” – Well, He’s Dead

Bodybuilder Doug Brignole is just like a lot of ignorant, Mockingbird Media indoctrinated, arrogant people who think they know better because they “trust the science” that has failed to prove itself over and over and over to be real science.  Instead, it has led to millions of injuries and deaths.  Brignole told anti-vaxxers, “People Can Use Me as a Test — If I Die, You Were Right” and then, following taking the deadly shot, he died.

Brignole died at age 63 and while his cause of death has not been revealed, we continue to point to the obvious, the experimental COVID shot.

“I have enough confidence in the vaccine, based on my research, to get it done,” Brignole said regarding the shot that even the producers say they never tested for efficacy and that has taken the lives of millions of people worldwide.

“Those of you who think the vaccine kills people can use me as a test,” he posted on social media.  “If I die, you were right. If I don’t die, and have no ill effects, you were wrong, and should admit it (at least to yourselves). Better yet, you should admit that you were misled, and tell the world who misled you, so other people can benefit by avoiding those fearmongers.”

“I’m vaccinated ! Well, the first of two. Let’s get this done so we can get back to traveling, going to concerts, and having fun. My vaccine was yesterday, and I had no problem with it. My deltoid was a bit sore, but otherwise fine. We’re all in this together, so let’s do our share to beat it.” 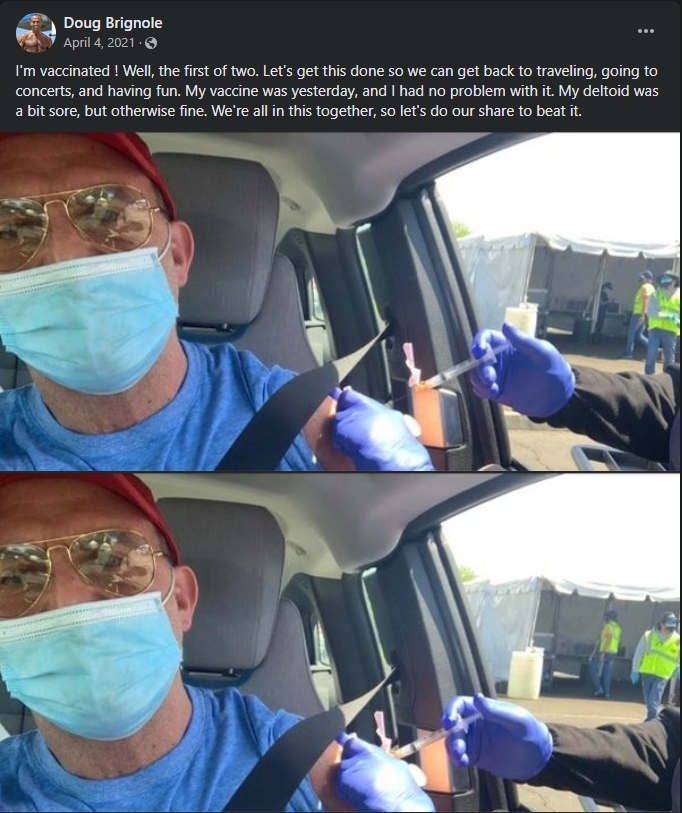 Sadly, Doug was foolish enough to believe the propaganda. The way to beat the CONvids is to turn off the television and the radio promoting it. It’s an UNPROVEN to exist “virus.” No one has even isolated the CONVids! NO ONE! There’s even a $1.2 million offer for anyone who can prove the existence of SARS-CoV-2, and so far, no takers.

Put Up Or Shut Up: Millionaire Journalist Offers $1.2 Million To Anyone Who Can Prove Existence Of COVID-19 – So Far No Takers

Keep in mind the amount of people who mocked those who warned of the experimental shot as they took it, and then died.

I’ll just say this:  With all the information we have concerning the shot and all those who have been injured or died, are we really to believe that this shot didn’t have something to to do with Doug’s death?  I think not, but I’ll let the reader make up their own mind.

Don't forget to like SonsOfLibertyMedia.com on Facebook and Twitter.
The opinions expressed in each article are the opinions of the author alone and do not necessarily reflect those of SonsOfLibertyMedia.com.
Previous Post:
How To Produce More Food Than You Can Eat In A Small Space (Video)
Next Post:
The Food Crisis Of 2023 Is Going To Be Far Worse Than Most People Would Dare To Imagine