It seems like Democrats are racing against the clock to impeach Trump over a nothing burger in Ukraine.

They seem fully willing to sacrifice Joe Biden to do it.

Why would they do that?

It seems that they want to fully control the Ukraine narrative before the whole truth comes out, because Joe Biden is not the only key Democrat that has some explaining to do about Ukraine dealings.

From Joe Hoft of The Gateway Pundit:

Corruption runs deep in the Deep State!  No wonder the Democrat House wants to get rid of President Trump now.  Speaker Pelosi and Democrat Rep. Adam Schiff are both connected to a Ukrainian arms dealer. This is why they lie in front of the nation.  They are afraid of their own deeds being uncovered!

As reported this morning, Adam Schiff leads the House Intelligence Committee and this past week he oversaw the Intel Committee where he attempted to align President Trump with some ‘trumped’ up allegations concerning his phone call with the President of the Ukraine.

Schiff lied in his opening remarks and claimed numerous falsehoods about the President’s call in spite of the transcript being provided the day before.

His entire description of the President’s call was a lie – we have the transcript and this was not in it!

….fraudulently and illegally inserted his made up & twisted words into my call with the Ukrainian President to make it look like I did something very wrong. He then boldly read those words to Congress and millions of people, defaming & libeling me. He must resign from Congress!

We know why Schiff is lying – he’s connected with a Ukrainian Arms Dealer!

In 2013 Ukrainian Igor Pasternak held two different fund raisers for Schiff asking for contributions between $1,000 and $2,500 – 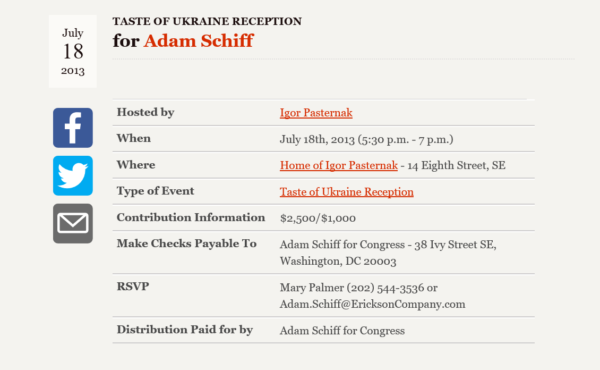 Pasternack has also been connected to George Soros –

Pasternak is an arms dealer. He has sold arms in places like Syria –

Now we can report that Ukrainian arms dealer Pasternak is also connected to Nancy Pelosi!

Below is Pasternak’s luxurious home in DC where he held fundraisers for the Democrats.

There is much more to this Ukrainian Arms Dealer that can be found at this link.  Of course, Obama’s Secretary of State Kerry, his Vice President Biden and DNC operative Alexandra Chalupa are all connected.

Chalupa is connected to the Steele dossier as well as Ukrainians and Democrat leaders.

Ironically, Pasternak also was in the massive crowd at President Trump’s inauguration –Read the rest at Gateway Pundit…
#####

Yaacov Apelbaum was the source for much of The Gateway Pundit story and has this:

How to Finance Your Congressional Campaign with Arms Sales

Running for Congress? Short on cash or donations? No need to worry. Now, you too can finance your entire campaign through Ukrainian arms dealers. Igor, for example, will even host the fundraising events in his $2+ million Washington DC brownstone (just one of several such houses he owns in the US). Igor will even provide the catering and valet parking free of charge.

And the best part is that you never have to worry about paying him back for any of these favors, because it’s all absolutely free, no strings attached. After all, everyone knows that Ukrainian arms dealers float the election campaign of congressional candidates like Adam Schiff, Nancy Pelosi, and Loretta Sanchez, because they are just so cuddly and lovable.

If you don’t buy any of this, then the following Adam Schiff, Nancy Pelosi, and Alexandra Chalupa linkage below agrees with you.

Image 2: Where is Igor? Using the Sentinel AI based face recognition to locate an arms dealer in a crowed of 500K people

Image 3: How a Ukrainian arms dealer Igor Paternak floated Adam Schiff’s 2013 election to Congress and Paternak’s linkage to Nancy Pelosi Ukrainian influence network in the US.

Image 4: Notes from the desk of Yaroslav Brisiuck’s the Ukrainain Chargé d’affaires in Washington DC suggest that Alexandra Chalupa could be a long term Ukrainian intelligence asset

Read the rest at apelbaum.wordpress.com…

Surprised by any of this?

What we are seeing now is just a big game of cover your own assets.

It seems that Pelosi and Schiff have a few extra reasons to make this Trump-Ukraine false narrative impeachment stick and if Joe Biden goes down for it, they will allow it.

Their first priority will be impeachment and their second will be to cover up their own shady dealings with an arms dealer from Ukraine.

If they can somehow save Biden, that would be a bonus but not a priority.

This story needs to be spread far and wide so that the American people can see the REAL indiscretions of those leading this witch hunt.

Don't forget to like SonsOfLibertyMedia.com on Facebook and Twitter.
The opinions expressed in each article are the opinions of the author alone and do not necessarily reflect those of SonsOfLibertyMedia.com.
Previous Post:
“Los Angeles Has Fallen” Documentary Highlights Failures of Decades of Liberal Policies
Next Post:
Houthis Claim Ambush of Saudis Killed Hundreds

Warning: “Recession” Could Be Coming During The “Dark Winter” Ahead
October 19th, 2021 Sons of Liberty Media