There is a reason many of us live in small towns.  I grew up in a large city, Kansas City, and chose to relocate to a small town.  I am surrounded here by many people who did the same.  Pete Buttigieg wants to end that for all of us.

This is part of the Democrat agenda to turn small towns BLUE.

If they have their way the entire electoral map will turn blue. 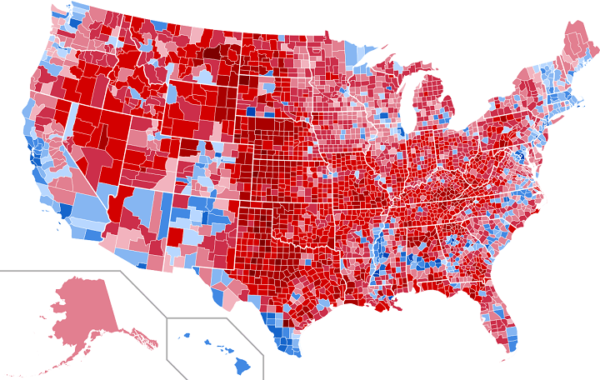 During a campaign stop in Merrimack, New Hampshire, Buttigieg touted his investor-friendly plan to inundate small American towns and rural communities with legal immigration for the sole purpose of driving up population growth.

I’m proposing what we call “Community Renewal Visas” that when a community that is very much in need of growing its population, recognizes that, and makes a choice to welcome more than its share of new Americans that we create a fast-track, if they apply for an allotment of visas, that goes to those who are willing to be in those areas that maybe are hurting for population but have great potential.

Buttigieg’s population growth agenda mimics a plan by the Economic Innovation Group, an organization led by investors, that seeks to create a “Heartland Visa” to flood small American towns with more legal immigration to increase the population.

More residents in the U.S. through immigration deliver huge returns for Wall Street, big business, developers, and investors who benefit from the addition of millions of new consumers, as well as residents in need of housing and jobs.

For years, investors and the pro-migration lobby have sought to increase the nation’s population via legal immigration to drive up the need for additional housing, which in return provides developers and contractors with a series of new work while increasing housing prices for Americans.

Already, at current legal immigration levels of about 1.2 million admissions a year, the U.S. population is expected to grow to an unprecedented 404 million residents by 2060 — translating to more cars on the road, more urban sprawl, additional housing and commercial development, and increased living density for Americans.

Buttigieg also hinted that he would back Sen. Mike Lee’s (R-UT) S. 386 to ensure that only Indian nationals obtain nearly all of the nation’s employment-based green cards over the next decade. The legislation is a bonus for outsourcing firms such as Cognizant and Infosys, as well as giant tech conglomerates like Amazon and Facebook, as it solidifies a green card system wherein only foreign workers on H-1B visas are able to obtain employment green cards by creating a backlog of seven to eight years for all foreign nationals.

Is anyone buying any of this?

This is totally a plan to change the political landscape.

Why immigrants (legal or not)?

Why not move American-born people from large cities?

They plan to flood small towns, like mine, with Democrat voters.

This would not only change the political landscape nationally, but it would also inhibit small town Republicans from raising in the ranks to state and then national offices.

In essence, this would kill the GOP at the grassroots level. If they do that, the GOP is done.

Buttigieg has a way of putting out seemingly harmless ideas that have pretty obvious dark agendas behind them.

There’s nothing like state-sponsored child molestation to get a guy more votes.

Buttigieg is an evil man, with a boyish charm, and he is starting to show his true colors now.

Buttigieg came out of nowhere to vault to the top of the Democrat Presidential heap.

Now is time to expose him and make sure his popularity does not cross over.

This man is dangerous and he is an enemy of America.

Let’s give him back to South Bend.

Has anyone else wondered how the Mayor of a town that barely has 100,000 people is right in the mix for the 2020 Democrat Nomination?

That link above explains a lot.

Mayor Pete is very possibly the Deep State counter to Trump for 2020.

We must expose him.

Don't forget to like SonsOfLibertyMedia.com on Facebook, Google+, & Twitter.
The opinions expressed in each article are the opinions of the author alone and do not necessarily reflect those of SonsOfLibertyMedia.com.
Previous Post:
Gun Grabbers Thumb Their Collective, Communist Noses At Virginians
Next Post:
The Stealth Foreign Takeover of America’s Colleges: Harvard & Yale Failed to Report Hundreds of Millions in Foreign Donations & Contracts

GOP Senators Pursue Declassification Of Trump-Russia Records As Window Of Opportunity Closes
November 24th, 2020 The Mental Recession
Send this to a friend