Conservative Celebrities On Social Media: Best Way For Hollywood “Minority” To Push Back

Last weekend, comedian and actor Rob Schneider released a series of posts on the social media platform Twitter, decrying the ongoing censorship on the part of tech firms like Facebook, Twitter and a host of others, also chiming in with some prominent like-minded users who posted in the same vein.

“We are in a real world Orwellian nightmare of censorship,” Schneider wrote in response to another user’s post, and any conservative, libertarian or constitutionalist would have to agree. As I asserted last week in this space, the cloying groupthink being imposed by Facebook and Twitter is but a test case for what liberal leaders envision for the nation at large. When “Community Standards” become codified in law, we will become like Canada, with pastors being arrested for reading Leviticus from the pulpit and parents investigated by the State because their child let it slip at school that Dad called homosexual men “fags” at the dinner table.

I have to credit people in the entertainment industry such as Schneider, James Woods, Adam Baldwin and others who literally put their livelihoods at risk when going against the liberal orthodoxy of the left and the Mafia-like creed that exists in Hollywood, wherein those diverging from that orthodoxy are summarily disenfranchised and their careers destroyed. Most consumers of entertainment media know that it is profoundly difficult to succeed in the entertainment industry and to maintain that success once achieved. Anyone who has actually made a career in this industry or attempted to do so will tell you it’s at least twice as daunting as we think.

Thus, amidst the self-serving, narcissistic atmosphere of the entertainment industry (mainly, Hollywood and the music industry), it is noteworthy when anyone of prominence “comes out” as a conservative.

It is true that Hollywood has long tolerated conservatives, if grudgingly and increasingly less so in recent years. Typically, it has been and still is bearable to them if an actor is known as a conservative; it’s only those who are politically active and vocal whom the industry finds threatening.

Schneider is a close friend of comedian Adam Sandler, who is conservative. While there are occasional anti-left barbs in Sandler’s work, he is not particularly outspoken in his conservatism. Sandler, however, has become so powerful in the movie business that if the power players in Hollywood targeted him for destruction, he could probably survive through some corporate vehicle of his own. In any case, he’s been so successful to date that he’d probably do quite well if he never made another dollar in Hollywood again.

Now, I don’t know if Sandler has said that he’d look out for his bro (Schneider), if they’re assembling a cabal of Hollywood conservatives to fight the power therein, or if Schneider simply possesses a high degree of character. I don’t know a lot of people in the movie business personally, but I do know a few. As such, I do know that it’s a much smaller circle that most people think it is, and that personal sensibilities and personal power play into Hollywood politics far more than in other industries. This is one reason that traditional politics factor so prominently in Hollywood, for better or worse.

So, it’s entirely possible that if Schneider was slamming liberal politics on his own, his colleagues would turn him into paste, but that this won’t happen because few wish to cross Sandler. The idea may appear laughable on its face; for some, it may be somewhat difficult to perceive “The Waterboy” actor (Sandler) as a force to be reckoned with in Hollywood, but he is. His soft-spoken, silly and often vulgar persona belies a very savvy, calculating guy who knows the business he’s in.

All of that said, I think some of us could take a cue from conservative entertainers who are risking their careers and who don’t mind getting suspended from Twitter or Facebook from time to time.

While many rank-and-file conservatives do continue to espouse conservatism on social media (and who do get suspended from Twitter or Facebook from time to time), I see a majority continuing to utilize them as blithely as they did prior to these platforms revealing that they were in the service of evil. Inasmuch as I see the actions of a Rob Schneider evidencing character, I see the behavior of some conservative social media users as evidencing a lack of character. Sometimes it appears that these folks simply don’t realize what’s at stake.

I’m not suggesting that conservatives abandon social media platforms that practice censorship, although I do respect the ones who have done so. I believe that we can do more good (or damage) from the inside than on the outside, however. Leaving Facebook and Twitter would only have a discernible effect if we were able to do so in toto, and this is not a reasonable expectation nor would it be a practical course of action.

“Keep your friends close and your enemies closer,” I say. Until the markets or the law catch up with these amoral tech companies, I believe that conservatives can accomplish much more on the inside than on the outside, and that we have a responsibility to remain stuck in their craw, at least for the time being.

Don't forget to like SonsOfLibertyMedia.com on Facebook, Google+, & Twitter.
The opinions expressed in each article are the opinions of the author alone and do not necessarily reflect those of SonsOfLibertyMedia.com.
Previous Post:
Jihad-Rep. Ilhan Omar Supports Group That Produced Child Beheading Skit
Next Post:
Anti-American Senator Cory Booker Wants To Impose Federal Gun License On Gun Owners To Exercise Their Rights 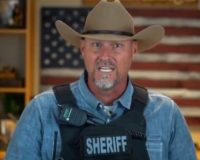