“Police say video surveillance suggested the same man carried out both attacks. They do not believe any other people were involved.” But there are many, many others all over Europe who share the world view of this “gunman,” and Denmark and the world will be hearing from them. But they’re too busy hand-wringing over “islamophobia” to be concerned about that.

Police in Copenhagen say they have shot dead a man they believe was behind two deadly attacks in the Danish capital hours earlier.

Police say they killed the man in the Norrebro district after he opened fire on them.

It came after one person was killed and three police officers injured at a free speech debate in a cafe on Saturday.

In the second attack, a Jewish man was killed and two police officers wounded near the city’s main synagogue.

Police say video surveillance suggested the same man carried out both attacks. They do not believe any other people were involved.

“We assume that it’s the same culprit behind both incidents, and we also assume that the culprit that was shot by the police task force… is the person behind both of these assassinations,” Chief Police Inspector Torben Molgaard Jensen told a news conference.

He said police would maintain a high presence in the city.

Prime Minister Helle Thorning-Schmidt said it was “a very sad morning” and described the shootings as “a cynical act of terror against Denmark”.

“I am happy and relieved that police have disarmed the alleged perpetrator behind the two shootings,” she said in a statement. “I will continue to encourage everyone to follow police instructions and be vigilant.”

She later visited the synagogue and said Denmark would do everything to protect its Jewish community. 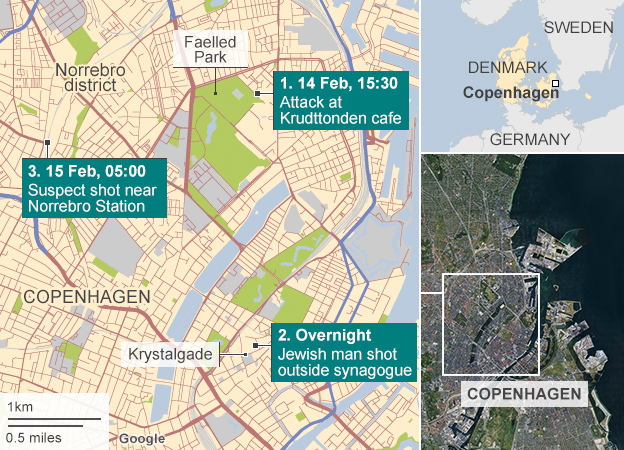 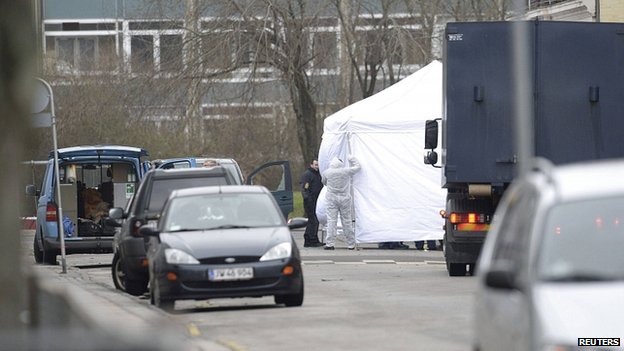 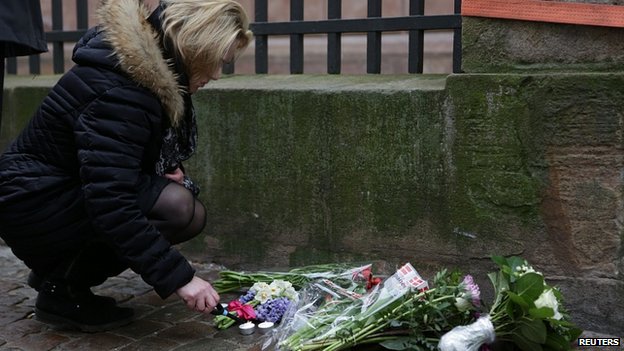 Flowers were left outside the synagogue in Copenhagen on Sunday

Early on Sunday, police said they had been keeping an address under observation in the district of Norrebro, waiting for the occupant to return.

The address, near Norrebro train station, had been identified using information from a taxi driver who dropped the suspect there following the first attack on Saturday.

When the man appeared, he saw the officers, pulled out a gun and opened fire, police said. They returned fire and shot him dead.

A massive manhunt had been launched after the first shooting, which took place during a free speech debate at the Krudttonden cultural centre hosted by controversial Swedish cartoonist Lars Vilks.

Officials said the gunman fled by car, and a black Volkswagen Polo was later found abandoned a short distance from the scene. Police said the gunman then called a taxi to take him home.