“Creepy” Joe Biden Gets Called Out At Gym Rally: “You Touch Kids On Video”

If there is one thing that former Vice President Joe Biden is known for, it’s his creepy behavior around children and other men’s wives.  However, at a recent rally at a new Hampshire Middle School gymnasium, two protesters stood up and blasted “quid pro Joe” for being a pervert and making money in Ukraine.

“You’ve touched kids on video, and women,” shouted one man, adding “We don’t need another old white man running for president – time to have a minority candidate,” to which Biden – who likely didn’t hear the guy, said “I agree with ya man. I agree. Nice talkin’ with you.”

At another point, another man begins berating Biden, “Excuse me Mr. Biden, how much money did you make in Ukraine?”

WATCH: Another man in the back of the room shouts at Biden, asking how much he made in Ukraine.
Biden fired back: “I've released 21 years of my tax returns, how many has yours? What's he hiding?”
A few minutes after this exchange, someone in the crowd behind Biden collapsed.
2/2 pic.twitter.com/rJIBK49uGJ

Protestor at a Biden event in NH:

"The truth is going to come out, buddy!" pic.twitter.com/r1UHCsmvna

Matt Agorist of The Free Thought Project then adds that a New York Times reporter has called for censorship of videos of Biden touching children inappropriately.

Nicole Perlroth, according to her bio at the New York Times, the place at which she finds employment, is a technology reporter who covers cyberattacks, hackers and the cybersecurity industry for The Times’s business news section. This week, however, she’s shown that she also has an interest in censoring open source information showing the seemingly inappropriate behavior of D.C. elite.

On Tuesday, Perlroth took to Twitter to essentially call for the social media outlet to ban images and videos of Joe Biden touching women and children inappropriately. In her Tweet, Perlroth referred to the images as an “alt-right fake news meme had emerged of Biden as predator.” She then called on Twitter to “handle” this situation. 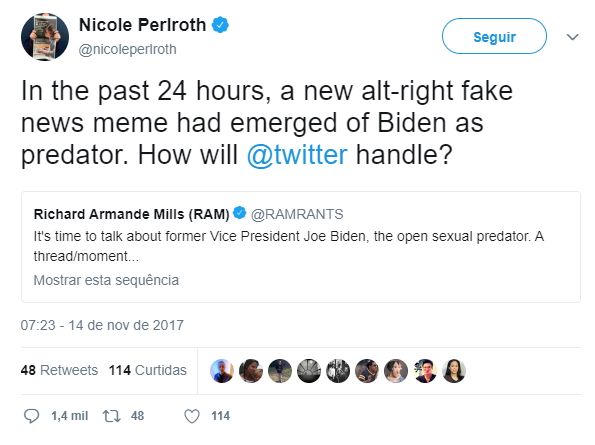 It appears that this cybersecurity reporter for the NY Times has missed the bus when it comes to the disturbing images of the insanely creepy former vice president groping, whispering to, trying to kiss, and otherwise making women and children incredibly uncomfortable.

This “meme” as Perlroth called it, is neither alt-right fake news nor new.

Smashing her partisan slant on the issue, the Free Thought Project has reported on this instance before, just like we have reported on Republican president George H.W. Bush and his propensity to grope women and underage girls.

In fact, the inappropriate sexual behavior in Washington D.C. has become so rampant that it is now costing taxpayers millions of dollars in hush money.

As TFTP reported this week, a congresswoman has come forward and claimed that the U.S. House of Representatives alone has spent $15 million in taxpayer funds to settle sexual misconduct lawsuits of politicians in the last decade.

The claim was made by Rep. Jackie Speier, a Democrat from California, during an interview on Meet the Press Daily with MSNBC’s Chuck Todd. When asked about the process sexual assault victims currently have to go through, Speier noted that they have to start by promising to stay silent.

“We really need to reform the entire Office of Compliance process,” Speier said. “Right now it takes about 90 days for you to file a complaint, and before actually going through the mediation, you have to sign a non-disclosure agreement and then you are not represented by counsel, but the harasser is represented by the House of Representatives general counsel.”

The congresswoman, who is a member of the House Intel Committee, then added that the sum of those taxpayer-funded settlements is not small, and has been building up over the last decade.

“We do know there is about $15 million that has been paid out by the House on behalf of harassers in the last ten to 15 years,” she said.

Could some of this money have gone to silence the myriad of women and children seen in the video below after Joe Biden creepily molested them in front of the world? Indeed, it could have.

As the Gateway Pundit reported, a former Secret Service agent assigned to the Vice President Joe Biden residence claims that the Service often had to protect female agents from him.

Speaking on the condition of anonymity, the agent asserted that,  “We had to cancel the VP Christmas get together at the Vice President’s house because Biden would grope all of our wives and girlfriend’s asses.”T he annual party was for agents and Navy personnel who were tasked with protecting the Biden family.

“He would mess with every single woman or teen. It was horrible,” the agent said.

To discount the rampant abuse in Washington D.C. in some ploy to paint your political opponents as creators of fake news is irresponsible, to say the least.

The media’s attempt to cover for and hush the alleged crimes of D.C.’s elite is so overt, as TFTP reported, is was witnessed on a recent episode of C-SPAN’s Washington Journal, on which Washington Times reporter Stephan Dinan and host Pedro Echevarria were discussing President Trump’s Presidential Advisory Commission on Election Integrity. But when a caller brought up pedophilia and dropped a few names, Echevarria cut him off and refused to address the caller’s concerns.

In April of last year, Dennis Hastert, former Speaker of the House who is an admitted child rapist, was sentenced to 15 months in prison after he was caught paying his victims to keep quiet. However, he was released in July — two months before finishing his already insultingly lenient sentence. Media silence.

As more and more of these politically elite predators get exposed, we can expect to see calls for censorship increase. Perlroth would do well to consider the above facts before being part of the problem as sunlight is the best disinfectant.

Below is a compilation former Vice President Joe Biden creepily fondling, smelling, and whispering to children and women.

America, we keep letting philanderers, usurpers and other criminals in the White House, whether by legitimate votes or voter fraud.  Does a man who seems to be a clear pedophile have any place near a public office?  I think not.  In fact, the Lord Jesus would say his place is probably at the bottom of a lake with a millstone wrapped around his neck.