Praying for Damar Hamlin who remains unconscious after collapsing on the field during yesterday’s NFL game.

Bills safety Damar Hamlin was taken off of the field in an ambulance after collapsing mid game.

Prior to 2021, Athletes collapsing on the field was NOT a normal event.

This is becoming an undeniable (and an extremely concerning) pattern 💉💉#DiedSuddenly pic.twitter.com/sYDbSgvbWF

Twitter has held ESPN hostage. Everyone is afraid to discuss this issue.

All of y’all who told your friends/family to get an experimental vaccine bc the gov told you to are responsible for this #Hamlin https://t.co/Pd0VvwT67I

This is a tragic and all too familiar sight right now: Athletes dropping suddenly. 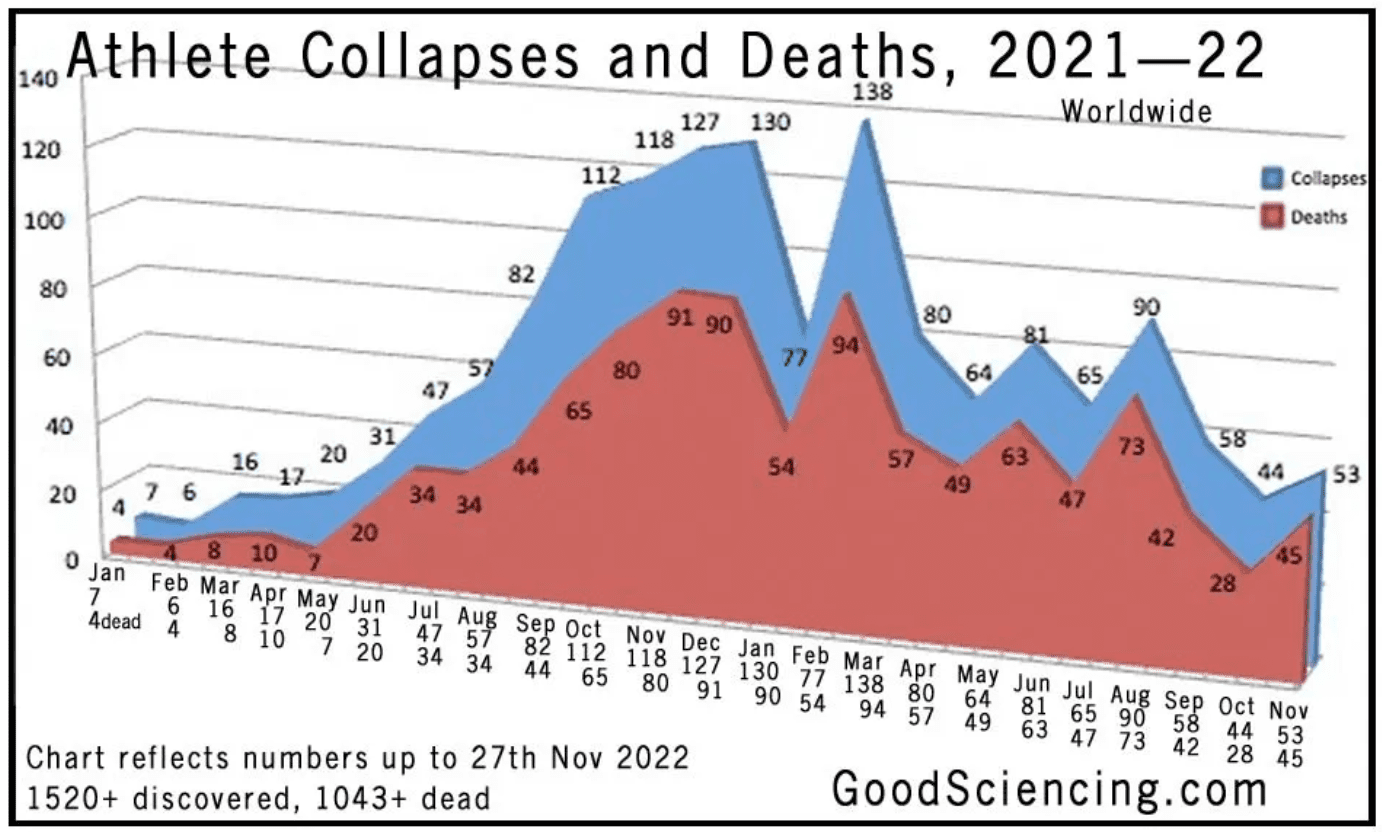 Yesterday was a tragic day in the NFL. Two football players collapsed each with a cardiovascular event – one died and the other is in critical condition.

Uche Nwaneri, a former Jacksonville Jaguars offensive lineman died suddenly. He was found collapsed in a bedroom in Indianapolis. Preliminary reporting from the Coroner shows he died of an “enlarged heart with acute heart failure.” He was 38.

There is no doubt that Mr. Nwaneri was vaccinated. He often spoke out on Twitter against the “idiot” anti-vaxxers who chose to find alternative treatments. In one tweet he claims:

“What kind of idiot must one be to actually take a dewormer ivermectin which has absolutely nothing in any study anywhere about using for Covid, but you’re stupid ass doesn’t want a vax. I mean natural selection takes over at some point right?”

He also says karma comes eventually and wishes it comes full circle for you, in response to another Tweet saying:

He was a strong believer in “the science.”

The second injury is 24-year-old Damar Hamlin who collapsed on the field after being tackled in Monday’s Buffalo Bills game in Cincinnati, Ohio. CPR was administered by Paramedics on the field and he was taken by ambulance to the hospital. At the time of writing, he is currently incubated in critical condition.

Many on Twitter are suggesting the blow to his chest (during a certain period in the cardiac cycle) could have triggered ventricular fibrillation. A severe but extremely rare (less than 30 cases each year- average age 15) condition called Commotio Cordis which is NOT associated with heart damage or COVID vaccines.

Was he vaccinated? I don’t know. I’ve looked through his social media and local news reports and couldn’t find anything mentioning the vaccine or COVID-19. In fact, I only saw one picture of him wearing a mask at a toy drive that he frequently hosts.

However, it is very likely he was vaccinated. The latest NFL COVID-19 Testing Results and Vaccination Ratespress release claims ‘nearly 95% of NFL players are vaccinated.’

Many on Twitter are suggesting the blow to his chest (during a certain period in the cardiac cycle) could have triggered ventricular fibrillation. A severe but extremely rare (less than 30 cases each year- average age 15) condition called Commotio Cordis which is NOT associated with heart damage or COVID vaccines.

Dr. Peter McCullough, a top American cardiologist who has spoken out against the COVID-19 vaccines has given his two cents:

I watched the play live both as a fan and a cardiologist and I saw blunt neck and chest trauma, a brief recovery after the tackle and then a classic cardiac arrest.  I have communicated to one of the most experienced trainers in the world and we agree that it was a cardiac arrest in the setting of a big surge of adrenalin.  If Damar Hamlin indeed took one of the COVID-19 vaccines, then subclinical vaccine-induced myocarditis must be considered in the differential diagnosis.   We have been told he was successfully defibrillated on the field and has been intubated and is not spontaneously breathing which is consistent with anoxic encephalopathy.  The nation prays for his complete recovery.

One of my first Substacks was regarding the ‘Thailand study’ – where researchers in Thailand found nearly 30% of young men showed cardiovascular events post-vaccination. A section of that article focuses on subclinical (no symptoms) myocarditis and how dangerous it is.

Damage from subclinical myocarditis (vaccine) causes myocardial scarring. From this an abnormal heart rhythm could develop leading to cardiac arrest. Further evidence demonstrated when superimposed adrenaline or noradrenaline surge occurs (during exercise) it was a key trigger for cardiac arrest and sudden death.

So a damaged heart (from the vaccine) might not have been able to withstand the blow from the tackle. The blow caused a surge in adrenaline which greatly stressed the heart muscle triggering cardiac arrest.