As was warned just days ago, if the Federal Reserve cut interest rates, it was a sing that we are heading into a recession.  On Wednesday, the Fed cut interest rates by 25 basis points to 2.5 percent.  The question is, do they have a clue what they are doing, or are they orchestrating something far more sinister?

So, does the Fed actually know what is going on or are they completely clueless?

The Mises Institute seeks to answer that question in an article posted on Thursday.

Yesterday, the Fed’s Federal Open Market Committee lowered the target federal funds rate by 25 basis points, dropping it to 2.5 percent. The Fed had last changed its target rate in December of 2018, when it raised the rate from 2.25 percent to 2.50 percent.

It now looks like 2.5 percent is the highest the rate is going to get for the foreseeable future. After all, according to the Fed, the current state of the economy is “moderate” and the job market “strong.” If the economy needs a rate cut under these conditions, it’s hard to imagine a situation in which the Fed will be enthusiastic about another rate increase. 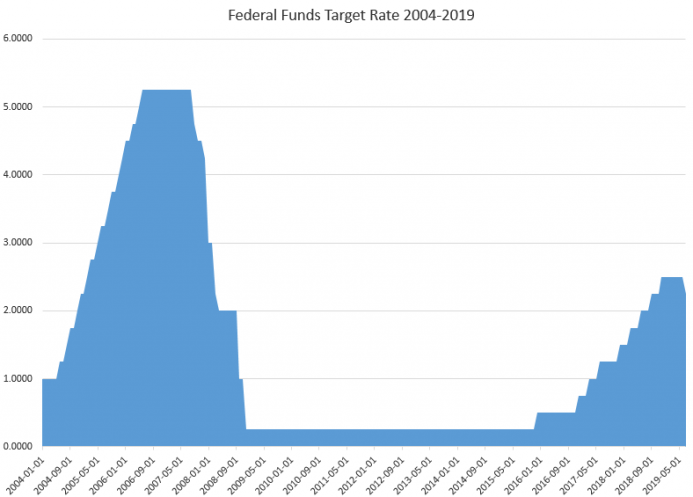 On the other hand, it’s entirely possible the rate cut is not motivated primarily by economic data, but by politics. Donald Trump has repeatedly and publicly pressured the Fed for a rate cut for many months.

It could be that the political pressure has had the desired effect. Economists — who are generally childlike in their naïve and fanciful views of how the political system works — actually appear to think the Fed is “independent” from the political system, or that it at least has been in the past. But that’s not the reality, and the Fed, for all its protestations of independence, may simply be doing what it has always done. If this alleged independence appears to have diminished in recent times, of course, the difference is really only that Trump is simply more public about the pressure he applies. Past presidents and policymakers have tended to stick to applying pressure behind closed doors.

But, for the sake of argument, let’s assume that the rate cut comes primarily as a result of Fed economists’ consideration of the data.

If the conclusion was that a rate cut was now warranted, this tells us that the economy is not really as strong as the Fed has long pretended it to be. This has been obvious for years, of course. For a decade, the Fed told us the “recovery” was proceeding nicely, but “oh by the way, we don’t date allow interest rates to increase to anything resembling even 1990s-type rates.” 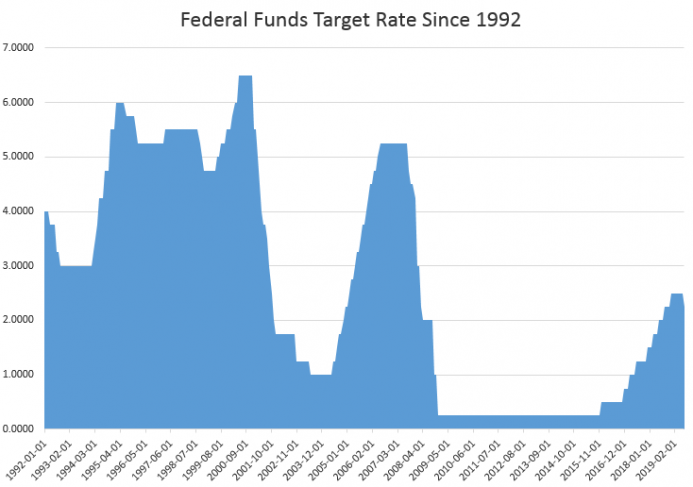 Inflation and the Phillips Curve

To explain this all away, the Fed has invented the “two-percent” which is a totally arbitrary number at which the economy is functioning with a healthy inflation rate. The fact that years of “strong” job growth hasn’t led to the “official” inflation rate reaching 2 percent suggests that either the method of measuring inflation is wrong, or the economy is weaker than the Fed thinks it is.

It’s possible that both factors are contributing. It’s possible that real wage growth is insufficient to drive sizable inflation. This, after all, is what has long been gospel among mainline economists: strong employment leads to higher inflation. But that doesn’t seem to be the case anymore, and Chairman Powell has even admitted this relationship — described by the Phillips Curve — doesn’t apply anymore.

On the other hand, it could be that the inflation measure is simply wrong. The CPI has long been a measure based on a lot of arbitrary judgment calls, such as those that go into hedonic pricing. This method is used to push down inflation rates by claiming price increases aren’t as big as they seem because products have increased in quality. The reality for most people is that cars simply cost more now — although hedonic pricing would suggest the price of cars hasn’t really increased. But saying those aren’t real prices increases because they reflect increases in quality is a pretty tone-deaf way of looking at inflation.

So, it’s hard to know exactly what’s driving the thinking behind the rate cut. Is it politics? Do Fed members believe their inflation data? Or is the economy truly weaker than the headline data suggests?

We can only guess at the moment. We only know that the Fed is mostly blowing smoke when it tells us that the economy is fine, but we also need a rate cut. Either the Fed doesn’t know what’s going on, or it’s lying about the economy being “strong.” Or it’s just doing what Trump is telling it to do.

Another issue that must be mentioned is the importance of keeping interest rates low in an environment of runaway government spending.

As the national debt continues to rise above $22 trillion, and as the annual deficit — in a period of “expansion,” mind you — inches back toward one trillion per year, it becomes ever more important to keep debt service low by pushing down interest rates. As debt payments rise toward half a trillion dollars per year in the coming years, interest rates must be kept low, or federal programs will face real cuts in order to make payments on the debt. That means cuts to things like the Pentagon and Social Security. Those cuts would be politically unpopular. Thus, policymakers will need the Fed to keep debt payments down by manufacturing demand for government debt — via artificially low interest rates.

The Effect on Savers

And finally, there is the effect on savers that all of this will have. Financial researcher Karen Petrou summed it up with a couple of tweets yesterday :

For ordinary and conservative savers, the effect of more than a decade of ultra-low rates has already been devastating. Thanks to the Fed, we now live in an economy designed for the ultra-rich on Wall Street who can afford to chase yield through high-risk investment instruments. For ordinary families who must save through lower-yield and lower-risk methods like savings accounts, this means they will continually lose purchasing power.

Fed policy has long been a war on ordinary families and savers. It’s a policy for the wealthy, and it worsens income inequality, as Petrou notes.

With the target rate now inching back toward 2 percent, the Fed will have even less room to maneuver when the next recession comes. But we don’t even need to wait for that. As Brendan Brown recently explained, we can already see the effect of ultra-low rates in increasing anemic economic growth numbers, and in withering real world savings and capital accumulation. We may not see a dramatic, crash, but simply see growth continue to under-perform.

In any case, the future doesn’t look good for people on fixed income, middle-income savers, or people in general who aren’t already property-owning millionaires.

Indeed, if you want to know if the Fed knows what it’s doing the answer is a resounding Yes.  Just ask G. Edward Griffin, author of The Creature from Jekyll Island

Don't forget to like SonsOfLibertyMedia.com on Facebook and Twitter.
The opinions expressed in each article are the opinions of the author alone and do not necessarily reflect those of SonsOfLibertyMedia.com.
Previous Post:
Home Equity Theft: When Tyrannical Government Steals Homes Over $8.41 In Unpaid Taxes
Next Post:
Repeat Offender Cited & Fined: Woman Nearly Bleeds Out After Botched Abortion Because Gosnell-Linked Clinic Lacked Emergency Supplies in Incident Previously Reported