Facebook Gets LOOMERED By Most Banned Woman In The World

OK, let’s be clear here.  The First Amendment applies only to Congress.  No business nor individual can actually violate the First Amendment.  However, plenty of big tech giants are clearly fascists in what they are doing to certain people on their platforms by labeling them as “dangerous” and “hateful” and “terrorists.”  That’s what happened to Alex Jones of Infowars, Paul Joseph Watson and Laura Loomer.  They were banned from virtually every social media platform.  In Loomer’s case, she has even been banned from Lyft and Uber!  So, what did the most banned woman in the world do when Facebook and Instagram labeled her as “dangerous” and banned her?  She Loomered their headquarters.

Last Thursday, Loomer went onto the campus of Facebook to see if she could address the issue and wanted to speak to someone about Facebook’s decision to label her as “dangerous” and informing the media about her ban prior to banning her.

Notice the anti-American faces on the wall behind the receptionist.

Granted, she is obviously upset and the yelling portion probably didn’t help her any, but frankly, when you deal with Facebook through their normal means, no one feels the need to respond, and Loomer references that over and over to every single person at Facebook she deals with.

She continues to reference the First Amendment, but as I said, that is not an issue here.  Libel and slander certainly could be issues since Facebook informed the media about their decision and she should capitalize on that for a big purse from them.

However, she did want to know how terrorist organizations who actually hate and actually commit murders and actually call for violence are allowed on Facebook’s platform while she and others were banned who have not engaged in anything remotely like that.

Of course, she had security called on her.  At several points, she was told that she could not be there as part of the media without permission.  She was also informed that since she would not go through their digital customer support that she was then trespassing because she had been asked to leave, which is correct.

However, anyone who has had to deal with Facebook understands that any and virtually all attempts through their website and other digital means rarely produces even a response, let alone a reversal.

Loomer wrote in the description of the video:

On May 2, 2019, I was permanently banned by Facebook and Instagram, and labeled as a “dangerous person”, a terrorist. Others who were banned include Milo Yiannopoulos, Alex Jones, and Paul Joseph Watson.

I have not committed a crime. My only crime is that I am a Conservative Jewish woman. I am now banned on every single social media platform and have been banned from making a living in America simply because of my politics.

I went to Facebook today and confronted them in Silicon Valley about why they banned me and labeled me a terrorist.

They called the police on me and banned me from the property forever.

Please support my legal battle against censorship and Big tech tyranny! Donate today at FreeLoomer.com, and sign the petition. Together, we can #StopTheBias

How is it not obvious that big tech social media companies are conspiring with the Left to ban Conservatives? In a world where bias wouldn’t exist, I would have known I was banned before anyone else. Yet it seems like I was the last person to know. I never even received an official notice from Facebook explaining why I was banned. I had to find out from radical left wing reporters via texts. I probably would have known earlier, but I am banned on Twitter as well, and don’t have access to social media, which is where news tends to break first these days.

Mark Zuckerberg has defended the rights of the lowest Holocaust deniers on his social media platform, but today he banned a female activist and journalist for being a pro-Israel Jew. All on Holocaust Remembrance Day.

I am a fierce advocate for Israel and the Jewish people, and yet when I go outside, people know me as “that Nazi bitch banned on Twitter”. Now, thanks to Mark Zuckerberg, my life is now in danger because he labeled me as a “dangerous person” today. I have never committed a crime. I have never advocated for violence. I am just a conservative Jew who voted for Donald Trump.

Thanks, Jack. Thanks Mark.

Their behavior is fascism, which makes leftists in Silicon Valley classic projectors.

MUST WATCH: #LauraLoomer went to Twitter CEO @jack Dorsey’s house last night and projected the names of all banned conservatives onto his wall, making his wall her own social media wall.

Twitter banned her livestream of the protest while she was at Jack’s house. #StopTheBias pic.twitter.com/Cpgbk2llIl 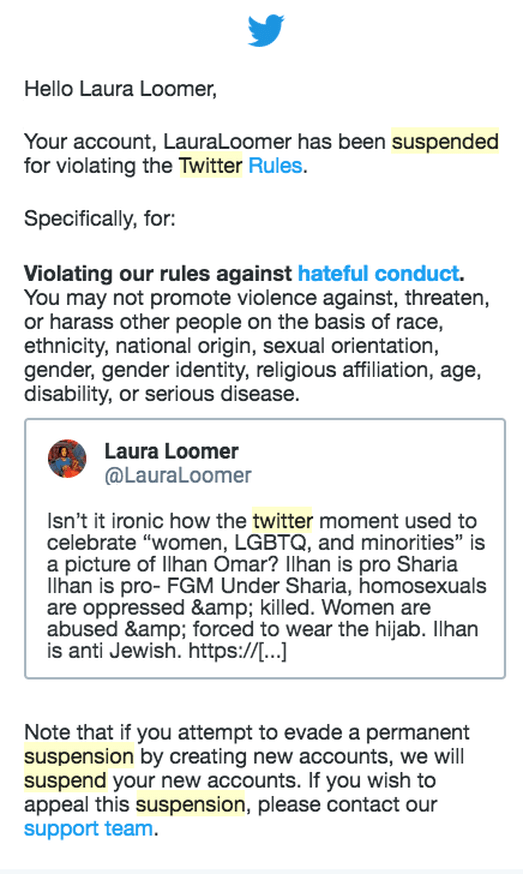 She then touted:  “As of May 2, 2019, I am now banned on every single social media platform and major payment processor in the world.”

Here’s a list of online platforms that have banned her.

She has filed suit against Twitter due to her November 2018 ban, which she claims has caused her great harm.  Additionally, she noted that her ban “came at the instigation of CAIR (Council on American Islamic Relations) and was carried out shortly after CAIR’s meeting with Twitter executives.”

CAIR is a designated terror organization and is a Muslim Brotherhood front group.  Yet, Loomer is the “dangerous” one.

Dur Zuckerberg and Jack “I like the good pasta” Dorsey have such a screwed up moral compass here that I’m surprised they can find their way to work every day.

If so inclined, you can help Laura in her pursuit of justice at FreeLoomer.com

Don't forget to like SonsOfLibertyMedia.com on Facebook and Twitter.
The opinions expressed in each article are the opinions of the author alone and do not necessarily reflect those of SonsOfLibertyMedia.com.
Previous Post:
Appeals Court: Reinstate Lawsuit on ISIS Terror Attack on Free Speech in Garland, Texas
Next Post:
It’s The Pedophile Protection Act, Not The Equality Act