The owner of the limousine that crashed in Schoharie, killing 20 people, is a former FBI informant who testified in two high-profile terrorism cases, a state official confirmed Monday. Hussain went to work for the FBI after being convicted of federal fraud charges in 2002 in Albany.

NY Post: The limo that crashed upstate, killing 20 people, failed a safety inspection just last month — and its driver wasn’t licensed to be behind the wheel, Gov. Andrew Cuomo said Monday. Of course, they haven’t released the driver’s name.

“The owner of the company — in my opinion, because there’ll be legal consequences — the owner of the company had no business putting [a] failed vehicle on the road. So we’ll go through the whole situation, but sometimes we have the laws, we have the regulations, they’re broken,” the governor said. The vehicle’s operator, Prestige Limousine Chauffeur Service, has had an overall dismal track history on safety, according to records from the Federal Motor Carrier Safety Administration.

Prestige botched four of five vehicle inspections in the past 24 months — forcing the carrier to cease operations each time, FMCSA records show. The company’s 80 percent failure rate dwarfs the national average of 20.72 percent, according to the statistics.

The collision turned a relaxed Saturday afternoon into chaos at an upstate New York spot popular with tourists taking in the fall foliage, with witnesses reporting bodies on the ground and broken tree limbs everywhere. An aunt of one of the victims in the vehicle said the group had been on the way to a birthday celebration.

Times Union: Saturday’s accident, which killed two pairs of newlyweds, four sisters from one family and two brothers from another, was the deadliest U.S. transport crash in over a decade, according to federal authorities.

Gov. Andrew Cuomo on Monday said the limo involved in Saturday’s crash at the intersection of Route 30A and Route 30 in Schoharie failed a state Department of Transportation inspection last month and should not have been on the road. 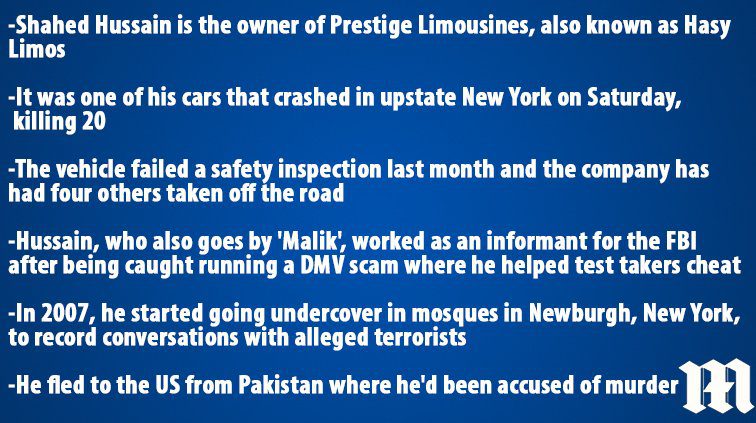 LIMO THAT CRASHED IN NEW YORK, KILLING 20, WAS IN BAD CONDITION: VICTIM’S AUNT

NEW YORK (Reuters) – A victim of a limousine accident that killed 20 people in upstate New York texted a friend that the 17-year-old vehicle “wasn’t in very good condition and sounded terrible” before it fatally crashed on the way to a birthday party, the victim’s aunt told CNN on Monday.

They were young adults — sisters, brothers, old friends and newlyweds — who were celebrating one of their birthday’s in a rented SUV limousine on a drive through rural Schoharie County. Twenty people died Saturday afternoon in the horrific wreck at the intersection of state routes 30 and 30A in the town of Schoharie. The stretch limo, packed with 18 people, drove through a stop sign at the notorious intersection and fatally struck two people in the parking lot of a popular country store, before slamming into an earthen embankment and killing all of the oversized vehicle’s occupants.

Valerie Abeling told CNN her niece, Erin Vertucci and Erin’s husband Shane McGowan, who were married in June, were among the victims in the limo.

Erin and Shane McGowan were just starting a life together after five months of marriage, the Times Union of Rochester, New York reported.

The McGowans were a part of a party of 17 young adults who climbed into the limo to celebrate their friend Amy Steenburg’s 30th birthday, the paper and other media reported.

They were headed to an upstate New York brewery, officials said, until the vehicle ran a stop sign at a highway intersection in Schoharie, New York, about 40 miles (65 km) west of Albany, police and the NTSB said.

It crashed into an unoccupied parked car and hit two pedestrians before coming to a rest in a shallow ravine, officials said. The limo driver, all 17 passengers and the two pedestrians died.

How dos running a stop sign precipitate ramming a PARKED CAR and pedestrians?

The owner of the limousine that crashed in Schoharie, killing 18 people on board and two pedestrians is a former FBI informant who testified in two high-profile terrorism cases, a state official confirmed Monday.

Shahed Hussain owns Prestige Limousine in Wilton, the official said. The limousine company is being scrutinized as federal and state investigators try to determine what caused the crash.

Gov. Andrew Cuomo on Monday said the limo involved in Saturday’s crash at the intersection of Route 30A and Route 30 in Schoharie failed a state Department of Transportation inspection last month and should not have been on the road.

The driver, Cuomo said, did not have a proper license to operate the vehicle.

Prestige Limousine shares a business address with the Crest Inn Suites & Cottages in Wilton, a motel that is also owned by Hussain.

Hussain lived at the motel but on Monday morning, the manager of the motel, Arnie Cornett, said Hussain moved about 18 months ago. He still owns the motel and continues to operate the limo company.

An official said Hussain owns the business but the limo service might be operated by one of his relatives.

Hussain went by the name “Malik” when he owned a home in Loudonville and was used by the FBI in Albany to infiltrate a Central Avenue mosque. Yassin Aref, an Iraqi refugee, was imam of the mosque and the main target of the sting that began in 2003. Aref and an acquaintance, Mohammed Hussain, a Bangladeshi immigrant who owned a pizza shop, were both arrested in 2004 and accused of laundering money for Hussain in connection with a fictitious terror plot.

They were convicted in 2006 and both sentenced to 15 years in federal prison.

Hussain went to work for the FBI after being convicted of federal fraud charges in 2002 in Albany. He was taking payments from immigrants, some of whom could not read English, in a scheme to cheat on state exams to obtain driver’s licenses.

In May 2009, Hussain again surfaced as an FBI informant when four men from Newburgh were charged with conspiring to plant explosives outside the Riverdale Jewish Center and Riverdale Temple in New York City. As in the Albany case, Hussain posed as a wealthy businessman and befriended the men before implicating them in a terror plot.

A total of five inspections were done of the company’s vehicles over the past 25 months, and 4 were taken out of service as a result, which is a rate of 80 percent failure. The national average is 20 percent.

Several years ago, Hussain got in trouble with the town of Wilton for running his limo business out of the back of the hotel. Town officials asked that he store the vehicles in Latham where they had previously been parked.

Don't forget to like SonsOfLibertyMedia.com on Facebook and Twitter.
The opinions expressed in each article are the opinions of the author alone and do not necessarily reflect those of SonsOfLibertyMedia.com.
Previous Post:
Establishment Is Just Another Name For Evil
Next Post:
TV Reporter Viktoria Marinova Who Exposed EU Corruption Found Brutally Raped & Murdered