Now that distrust of government narratives—the prime example being 9/11—make you a far rightwing white nationalist terrorist, according to the FBI, let’s look at what we can expect in the weeks and months ahead.

The FBI, America’s secret political police, is known for arranging fake terror attacks to alarm the public and keep the war on terror moving along and dominating headlines. Recall the case of Jerry Drake Varnell, a 23-year-old diagnosed schizophrenic, the FBI tried to turn into a rightwing terrorist back in 2017.

In a June meeting with the agent, according to FBI documents, Varnell described himself as a believer in “Three Percenter” ideology, a right-wing group claiming to be committed to standing against and exposing corruption and injustice.

The plan was to replicate the Oklahoma City bombing and have the FBI rush in at the last minute and save the day. In order to do this, the patsy would be of diminished capacity.

Varnell’s family issued the following statement in August of 2017:

We as a family are extremely distraught about this situation with our son Jerry Drake Varnell, but what the public must understand is that he is a paranoid schizophrenic and is extremely susceptible to different types of ideology that normal people would deem immoral. Underneath his condition, he is a sweet-hearted person and we are extremely shocked that this event has happened. However, what truly has us flabbergasted is the fact that the FBI knew he was schizophrenic. The State of Oklahoma found him mentally incompetent and we, his parents have legal guardianship over him by the Court. These documents are sealed from the public, which is why no news media outlet has been able to obtain them. The FBI clearly knew that he was schizophrenic because they have gathered every ounce of information on him.

The fact Varnell is mentally ill and incapable of building a bomb was buried by screaming headlines praising the FBI for preventing a fake terror attack it engineered.

It’s obvious what we are seeing here. The ill-defined terms “white nationalist” and “conspiracy theorist” are being equated with hatred and violence, thus a national security threat.

Because “white supremacist” violence is minor when compared to the far larger danger of violence in Chicago and other American cities, scary news reports, exaggerated statistics, and the image of goose-stepping and torch-bearing Nazis are required, along with FBI entrapment operations, to get consensus on breaking down doors, planting evidence, dispatching informers, and instigating violence like it did during COINTELPRO some forty-odd years ago.

Somewhere along the line an FBI bomb will detonate, as it did during the 1993 World Trade Center bombing, and this will shape-shift into consensus to crack down on “white nationalists,” now conflated to include Alt-righters, conspiracy theorists, and just about anybody who doesn’t believe slap-dashed government narratives on a variety of issues.

The QAnon community, unsurprisingly, is shocked and confused that the FBI has identified QAnon as a domestic threat.

The FBI, of course, will not be knocking down the door of every Alt-righter posting on social media. It will persecute the figureheads and this will send the message that disagreeing and exercising the right to free speech will get your locked in the crosshairs of the state and its media.

Don't forget to like SonsOfLibertyMedia.com on Facebook, Google+, & Twitter.
The opinions expressed in each article are the opinions of the author alone and do not necessarily reflect those of SonsOfLibertyMedia.com.
Previous Post:
Popular, But False
Next Post:
Here We Go Again: More Mass Shootings – More Calls From Politicians To Attack Our Rights

About the Author: Kurt Nimmo

How the Democrats will pay for impeaching Donald Trump
January 25th, 2020 Liberty Unyielding 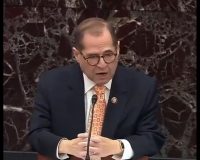