Thursday is the day that a Montana law went into effect and will greatly diminish federal programs that seek to militarize local police of the state.

The bill, which passed 46-1 in the state Senate and 79-20 in the state House, was signed into law by Governor Steve Bullock in April.

“I’m incredibly pleased. In the latter part of the session you see so much partisanship so it’s heartening to see that both Democrats and Republicans could get behind it,” Schwaderer had previously stated. “It’s no lightweight bill. It substantially changes policy in a way that strengthens the civil liberties of Montanans.”

“This foundation sets a massive precedent in Montana and the country as to what kind of society we want to have,” Schwaderer added. “If you get to the point where you need a grenade launcher, we’ve got the National Guard.”

The Tenth Amendment Center also points out that the bill, “closes this loophole by banning law enforcement agencies from purchasing such military equipment with federal grants. They could continue to purchase them, but would have to use state or local funds, and the agencies would have to give public notice within 14 days of a request for any such local purchase.”

The growing ties of federal ties to militarization of local police without any real need to do so is alarming. Last year, in the wake of the Ferguson riots, The Guardian reported:

Billions of federal dollars have been spent since September 11 on purchasing modern and often military-grade equipment for state and local police. But there is little that limits the use of that hardware to counter-terrorism purposes, and oversight of the spending is difficult, according to federal sources and documents reviewed by the Guardian.

In the wake of the Ferguson protests, much attention has gone to the Department of Defense’s program to supply surplus military equipment to police. But that program is eclipsed in size and scope by grant money from the Department of Homeland Security (DHS), which enables purchases of similar “tactical” equipment.

Under existing federal requirements, police departments and state law enforcement agencies do not need to spend much of that money on preventing terrorism or preparing for disaster relief.

The Guardian then added, “During the current fiscal year, DHS plans to award $1.6bn in grant money for state, local and tribal agencies, mostly to aid them with counterterrorism, border security and disaster preparedness, it announced last month. By contrast, the Defense Department’s “1033” program to transfer surplus military gear gave out less than $500m worth of equipment in fiscal 2013.”

While some will claim that this is necessary for police to “do their jobs” and that it would normally cost the states to buy this equipment, people must begin to think for themselves and ask, does our local police force actually need a military vehicle on American streets? Are we really at war and need MRAPs or Bearcats? I think not. In fact, one Washington Sheriff’s deputy has claimed that they need such vehicles to deal with “constitutionalists.” And a school district in San Diego even has an MRAP! What on earth are they preparing for from students?

None of this is necessary. As the feds attempt to militarize the local police, they are doing everything they can to disarm the American people in clear violation of the Second Amendment.

As retired Marine Col. Peter Matino told his city council back in 2013, “Is everybody blind? (The US) is building a domestic army!”

I agree, and I’m glad to see that Montana is leading the way against the tyranny. Now, perhaps other states will take the same measures.

Don't forget to like SonsOfLibertyMedia.com on Facebook and Twitter.
The opinions expressed in each article are the opinions of the author alone and do not necessarily reflect those of SonsOfLibertyMedia.com.
Previous Post:
Irving Mayor Beth Van Duyne: Clockboy Ahmed Mohamed Told Reporters a Lot More than He told Police
Next Post:
Have You Been OUTFOXED? 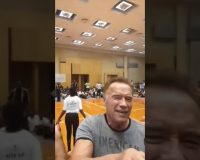