The page, a screen shot of which has been sourced from internet archive site The Wayback Machine, is posted below and shows totals for the upcoming Presidential race. It announces Hillary Clinton as the winner.

As Jim Stone notes, the page was pulled directly from the WorldNow.com content management platform utilized by major networks like NBC, CBS, ABC and Fox and appears to be a non-public staging area for news and election results.

The original page has since been reset. 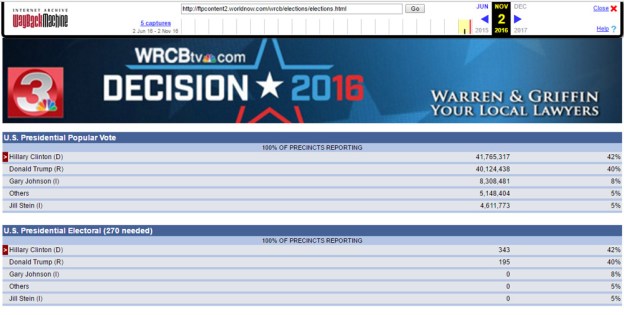 Though the results information appears on an FTP server at WorldNow.com, media companies like NBC’s WRCB TV utilize the platform, also know as “Frankly,” to power their news content. This can be verified directly a the WRCB web site by scrolling to the very bottom of the page footer which notes that it is, “Powered By Frankly.”

In addition to national results, Jim Stone has identified another page at the WorldNow.com FTP server that appears to show the State-By-State Presidential election results. This page is also accessible in archive format at WayBack Machine with a line by line breakdown available at Stone’s website.

Of interest is that the State-By-State results indicate a Hillary Clinton win in states like Texas (42% to 40%), Florida (44% to 40%) and Pennsylvania (44% to 40%) which have all been identified as states Clinton must steal to win the election.

Do these latest election “results” confirm that the fix is in and the vote is rigged?

If so, then we are no longer looking at an election where our votes will count, but rather, a selection where the winner is determined by those who count the votes.

Don't forget to like SonsOfLibertyMedia.com on Facebook and Twitter.
The opinions expressed in each article are the opinions of the author alone and do not necessarily reflect those of SonsOfLibertyMedia.com.
Previous Post:
Wikileaks: Podesta Emails Show Democrats Bigotry and Hatred of Jews, Netanyahu “turbaned Israeli mullah”
Next Post:
Should Hillary Clinton Be Elected President…