Florida: Is The State Attorney, The Lee County Sheriff’s Office Or The Judge To Blame For Releasing A Criminal Who Committed A Double Murder?

Lee County Florida is as corrupt a city as they come.  I’ve documented for you that then-Governor Rick Scott-appointed Sheriff Carmine Marceno has engaged in perjury, fraud, unethical behavior involving Deanna Williams, and impersonated a police officer in the state for well over a decade due to violating Florida law concerning the requirements for an out-of-state police officer coming into the state.  I’ve documented former State Attorney Steven Russell’s failure to prosecute murderers, as well as the corruption and pitiful prosecutory performance of current Islamic jihad-tied State Attorney Amira Fox Dijani.  I’ve also documented the corruption in the Lee County judicial system that has made rape victim Deanna Williams a victim of the system’s injustice over and over again.  Now, apparently, the system completely failed two women who were found murdered this week by a man that the system failed to charge properly and the state attorney’s office, as well as a judge in the matter failed to deal with seriously.

Cape Coral police confirmed Friday that Wade Wilson is the person of interest in the murders of Diane Ruiz and Kristine Melton.

Wilson’s ex-girlfriend said she tried to warn people that Wilson was a “psychopath.”

“[He] punched a hole through my back door once and threatened to kill my dogs a couple times,” she said.

Then, in February, one day before her birthday, Matthews says he put his hands on her.

He told me he could either knock me out and tie me to a tree or he could tie me up in my car. So, obviously, I didn’t want him to hit my face, but he ended up hitting me in my face anyway, splitting my lip open. He tied me up in the back up my car, covered me with laundry so no one could see me and ended up driving me all the way to the Keys.

During the trip from Palm Beach to the Keys, Matthews says she was also raped. She reported the crime to the Palm Beach Sheriff’s Office, but no charges were filed.

According to the report, Wilson disputed the claims and there were no witnesses and no evidence to establish probable cause.

Matthews worried if not her, he would kill someone else. That’s why, she says, she tried to get him in prison.

So she turned to Facebook, posting her story twice in May. She says Wilson’s next girlfriend also filed a report claiming abuse. She reached out to Matthews online.

“…the first time Wade hit [her,] she had contacted me crying about it and I told her to get away from him because of what he did to me, and the next time he’s probably going to kill them,” she said.

Words of warning she wishes everyone would have listened to.

When asked how she’d describe him now, Matthews said, “A psychopath. Like, a disgusting monster.” 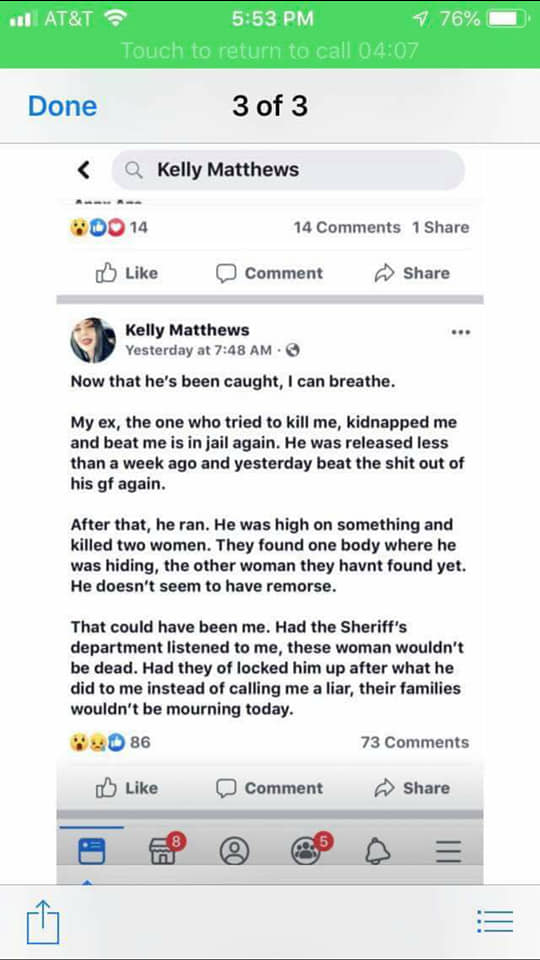 Yes, and had the sheriff’s office listened to Deanna Williams, things might be different for her and her stillborn baby, but people don’t want to listen for some reason.

However, when Wilson was arrested and put in jail, he apparently made several bombshell calls to his ex-girlfriend, Melisa Montanez, confessing to the murders and why he committed them.

WINK News Investigative Reporters Allison Gormly and Lauren Sweeney stopped by to see Montanez, and found Montanez on the phone with Wilson, who was calling her from a recorded Lee County Jail phone line.

Cape Coral detectives say Wade is a person of interest in the deaths of Kristine Melton and Diane Ruiz.

During those calls, Wilson told Montanez about the murders of two women and why he did it.

Throughout the conversation, Wilson professed his love to Montanez, pleading with her to stick by him.

“You’re the best thing in my life ever,” Wilson said to Montanez over the phone.

“I’m still in shock. I don’t even know what’s going on,” Montanez responded.

“Even after this, you’re still the best thing ever,” Wilson said. “You know that.”

Montanez called police last Monday after she says Wilson went to her business and beat her up. That violent attack allegedly happened the same day Melton’s body was found in her Cape Coral home, and the same day Ruiz went missing before investigators also found her body.

Montanez agreed to go on camera for the interview if we promised to hide her face.

Montanez said she believes Wade is dangerous, to which we replied, why?

Why does this cause me to question who in the system is responsible for letting this man be on the loose in the first place?

I present to you Exhibit A.

A quick read through this doesn’t present a pretty picture of either Wilson or Montanez.  However, the cruelty and violence that is mentioned is enough to cause anyone’s skin to crawl.

Yet, let’s note a couple of things.

First,  the couple moved from hotel room to hotel room over a two week relationship in which they consumed alcohol and had sex multiple times a day.  So, their relationship was nothing more than “partying.”

Ms. Montanez claims the sex was all consensual except for one occasion where he sodomized her.

Fourth, at one point, he became violent in the car with her over texts on her phone and when she attempted to flee, he ripped her skirt off, causing her to flee naked with just a t-shirt on for help.

There are instances in Montanez’s statement in which Wilson was clearly alleged to have kidnapped Ms. Montanez.  According to the probably cause statement filed by Lee County Sheriff’s Office:

“In one of those incidents the victim attempted to flee from Wilson but was caught after Wilson ran after her, Wilson then choked her to the point of unconsciousness where he then tied her hands behind her back and placed her in a vehicle.  Wilson then drove her back to their residence at 11751 Oak Run Lane, Fort Myers, Florida.  Once back at the residence Wilson placed the victim into a boat and placed his penis into her anus, without the victims consent.”

“On approximately June 23, 2019, the victim and Wilson were in a vehicle when he became upset at her over text messages.  The victim decided to attempt to flee because she did not want to be harmed by Wilson.  Wilson grabbed her skirt as she attempted to exit the vehicle and pulled it off her.  The victim stated that she ran a short distance seeking help with only a skirt on due to her not wearing underwear on this day, Wilson caught up to her and choked her until she passed out.  Wilson then tied the victim up with a form of cord, binding her hands behind her back.  When Wilson attempted to tie her feet she began to kick and cry at which point he stopped trying to tie her feet.  Wilson placed the victim into the vehicle but believes she was in the front seat with her head toward his lap.  The victim said that she was blindfolded during this incident by an unknown object, which she could not see through.  The victim was taken to a boat that was located at the dock at the back of the property where Wilson pushed her onto the boat.  Wilson then told the victim that he was teaching her a lesson and began to penetrate her anus with his penis.  The victim does not recall if Wilson used a condom but does not believe so because they had not used one up to this point.  After this was over Wilson took the victim back to the car and told her that the pain was over.”

That’s not all, when I conveyed the information found in the document to former Lee County Sheriff Rod Shoap and asked his opinion concerning the Lee County Sheriff’s Office recommendation of a misdemeanor charge of Battery or Strike, he said it seemed clear that charges of kidnapping should have been put forth, which would have probably kept Wilson in jail.

Now, once the binding and pulling her in the vehicle occurred, that was kidnapping, which is felony in the State of Florida, and could result in 30 years in prison and a $10,000 fine, or if biblical justice was rendered, which is real justice, the death penalty.

Neither the Lee County Sheriff’s Office under Carmine Marceno chose to bring that as a possible charge nor the State Attorney’s OfficeDeanna Williams headed by Amira Fox nor the judge in the matter, Devin George determined to make this a felony charge, which may have resulted in more for Wilson rather than a mere “restraining order,” which allowed him to roam around and seek out two women that he has confessed to murdering.

When I present the information I have reported on concerning the corruption in each of these offices and the judicial system, the clueless sheeple respond with “crime is being taken off the street.”  Really?  I think not.  It’s in Lee County government, and now two women are dead because the people have allowed it.  Will they continue to allow the corruption that attacks?

As for WINK News, I wish they put half the effort into the documented crimes and fraud of Sheriff Carmine Marceno and the complaint that Ms. Williams made against him as they did in this story.

For more documentation I referenced concerning Carmine Marceno, Amira Fox and the State Attorney’s Office, along with the ongoing story of Deanna Williams, visit these previous reports.

Don't forget to like SonsOfLibertyMedia.com on Facebook and Twitter.
The opinions expressed in each article are the opinions of the author alone and do not necessarily reflect those of SonsOfLibertyMedia.com.
Previous Post:
CATO Survey: 47% Of American Socialists Believe “Taking Violent Action Against the Rich May Be Justified”
Next Post:
NC Sheriff Barred “Co-Habitating,” Unmarried Deputies – Reversed Decision, But NC Law Still Makes It A Crime