Palm Beach County, FL — Eight-year-old Fiona Lashells is a brave 8-year-old who, with her parents’ support, waged an epic campaign of civil disobedience which ultimately ended in a victory for her — and all who cherish personal liberty.

For over two months, this second-grader and her family waged a stand-off with the school board over their childhood mask mandate. As the days of resistance grew, so did their popularity, eventually coming to a head this month.

On Monday, for the first time in months, Fiona walked onto her elementary school campus without a mask and with the reception akin to a returning war veteran. 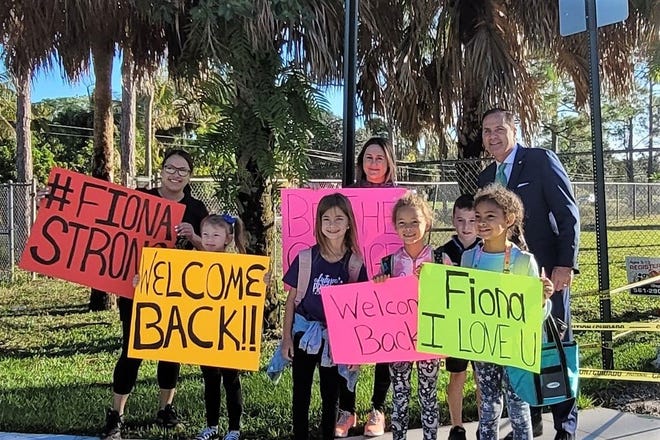 Fiona had been suspended nearly 40 times for her choice not to wear a mask. Even after the state ended mask mandates in July, the Palm Beach County School board continued to keep it in place, much to the chagrin of the thousands of children and parents.

Fiona’s campaign of resistance gained national attention when she went before the school board in September and told them that “your rules suck,” adding “I hope you all go to jail for doing this to me.”

“Just because I get suspended for not wearing a mask isn’t going to change my mind. You can keep suspending me, I still have the right not to wear a mask,” the girl urged.

School board speech by Florida 2nd grader who was suspended 36 times for not wearing a mask:
Legend 🇺🇸🇺🇸🇺🇸 pic.twitter.com/SjEAhuQuP8

The campaign was successful and after Fiona and her family set off “on a mission to take back, not only her rights but every American child’s constitutional rights from the tyrant school board,” according to her mother Bailey Lashells, Fiona has scored a victory as the district told parents that “a face covering opt-out will be reinstated effective Monday.”

“Based on a new development at the State level, the School District will be moving to an opt-out status for facial coverings for students in all grade levels,” the district announced.

According to a report in the Palm Beach Post, many of the children in the school have already opted out of the mask mandate.

According to her mother, Fiona actually wore a mask all of last year. However, when spikes and subsequent reductions in covid cases appeared to happen completely independent of mandates, frustrations started to grow.

Fiona said the mask made her tired and she was worried about breathing in bacteria from wearing the same piece of cloth over her mouth and nose all day long. Her resistance began after the school board lifted the mandate when cases went down and then quickly reinstated it when they picked back up.

After the first mandate was ended, Fiona’s mother promised that she would never have to wear one again. And she held true to that promise during the second mandate.

“We promised her she wouldn’t have to wear a mask,” Lashells said. “I think that’s what upset her so much. We had made that promise to her at the beginning of the year.”

When it was time to go to school, Fiona would bravely show up with no mask where she was promptly suspended. She would be sent home for three days at a time with worksheets to complete on her own.

“Every three days I take her back and she gets the next suspension,” Lashells said.

Naturally, the pro-mask crowd has lashed out at Lashells, claiming that she is using her daughter as a pawn. However, it is entirely natural for many kids not to want to wear a mask and become heavily frustrated when mandates are erroneously implemented and lifted, leading to false hopes.

Also, Lashells has dispelled those accusations, insisting that this entire act of civil disobedience was her daughter’s idea.

“She’s been just so adamant that she wants to make sure everyone can go back to school and have a choice,” she said. “I just love the people thinking I’m the one doing it.”

During the entire debacle, Fiona and her mother made sure to reiterate the fact that this resistance was not just a matter of personal comfort but served a much larger purpose.

Don't forget to like SonsOfLibertyMedia.com on Facebook and Twitter.
The opinions expressed in each article are the opinions of the author alone and do not necessarily reflect those of SonsOfLibertyMedia.com.
Previous Post:
Biden’s Dirty Deal With the Taliban – The Deal Isn’t Over Yet!
Next Post:
‘Frickin’ Black Guy! I’m Going Shots Fired’: Lunatic Cop Almost Kills Black Teen For Delivering Newspapers (Video)

Trains Being Openly Looted in LA as Police Say Captured Suspects Are Given the Revolving Door Treatment
January 16th, 2022 Flag And Cross