What’s it going to take for Americans to see what is actually happening right in front of their eyes?

Former Twitter CEO and multi-millionaire Dick Costolo admitted on Wednesday night that he wants to murder those people he doesn’t agree with politically.

Costolo tweeted this out on Wednesday night. 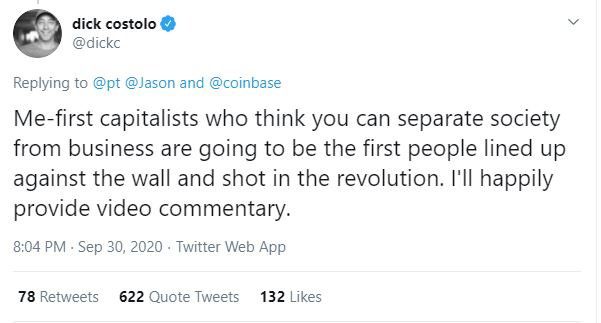 This is a direct threat of murder posted on Twitter.

Many harsh words are traded on Twitter each day. Dick Costolo, the former CEO of the company, added some of his own tonight.

Costolo was responding to a debate that has consumed tech’s elite on Twitter over the past few days, an argument about whether the industry should actively promote social justice causes and encourage political conversations at work. Costolo’s comments had the effect of dumping a jerrycan’s worth of fuel on the fire. “Me-first capitalists who think you can separate society from business are going to be the first people lined up against the wall and shot in the revolution,” he tweeted. “I’ll happily provide video commentary.”

Costolo’s extraordinary language—suggesting he’d like to see some of his peers face a firing squad—was jarring and reinforced the profoundly unusual and troubling circumstances that have enveloped corporate America this year. Businesses have faced a deadly pandemic, a global recession and the most profound reckoning over civil rights in several generations, sparked by George Floyd’s death while in police custody last May. By turn, corporations and the CEOs running those firms have been left wondering what role—if any—they should take in the movement, inaction on their part sometimes leading to the unhappiness of their employees.

Me-first capitalists who think you can separate society from business are going to be the first people lined up against the wall and shot in the revolution. I'll happily provide video commentary.

Don't forget to like SonsOfLibertyMedia.com on Facebook and Twitter.
The opinions expressed in each article are the opinions of the author alone and do not necessarily reflect those of SonsOfLibertyMedia.com.
Previous Post:
“Please Don’t Let Me Die”: Colorado Woman Hog-Tied, “Tortured” By Cop In Back Of Patrol Car During Transport For Over 20 Minutes (Video)
Next Post:
A Stunning New Revelation of the End-Times is Being Revealed! (Video)