Sean Hannity recently spoke with a former NYPD Commissioner and the mystery continues to grow.

Here’s Gary from Next News Network:

So the former NYPD Commissioner is insisting that there has to be video of anyone who may have entered Epstein’s cell.

I think most of us already suspected that.

Kerik, as the former NYPD Commissioner, is very familiar with the prison. Kerik also ran the Department of Prisons in New York for six years involving about 133,000 inmate admissions a year.

Bernard Kerik told Sean there should be video from the hallway outside of Epstein’s prison cell.

Bernard Kerik: I think there is a couple things the Attorney General is going to focus on, primarily Sean. Who authorized him to come off of suicide watch? Was he put in a buddy system? Was there a secondary system in that cell?  The reporting is, there was. That person was removed. I can tell you I know that housing area that he was in quite well. In the northside and the southside of the hallway where those cells are, there are cameras overhead. So you’ll be able to see who went in the cell, who came out of the cell. There’s no camera facing in the cell. So you wouldn’t see inside.

Sean Hannity: But we would know the time he was last checked on…

Bernard Kerik: Sean, that area that he was in, 9 South, historically those bed checks are 15 to 30 minutes. A bed check is looking into a cell, identifying the person that’s in there and they have to guarantee that they’re breathing. If they can’t see that they’re breathing, once they see the body they have to wake the person up to make sure they’re alive. I cn tell you if those checks were not done, that’s going to be one of the irregularities that the Attorney General’s talking about.

It’s almost like they don’t want us to see the footage because of what it may show. 😉

Hopefully it doesn’t show this woman in the painting from Epstein’s mansion. 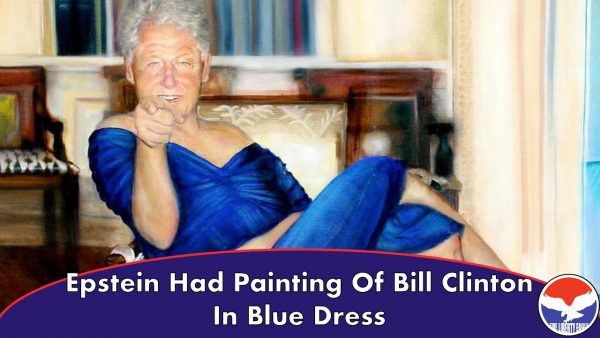 I doubt it was Bill.

He wouldn’t want to snap a heel.

Anyone who has not figured out that the whole Epstein suicide story is BS might want to do some more reading:

Is anyone out there really buying all of these things as coincidences, and that those who enabled the “suicide” are being forthright?

There were 50 VIPs that wanted him dead according to Giuliani, and we found out yesterday that the list is still far from complete.

Seriously, if you are following the mainstream news sources for this story you are missing most of the evidence being gathered.

They want to gain your eyeballs and increase their viewership, but they will never reveal the truth.

Someone either killed or moved Jeffrey Epstein and we may never know the truth, but we will keep searching for it.

Unlike the big networks, we don’t answer to big corporate sponsors and don’t spin the stories the way we are told to spin them.

We don’t need no freaking sponsors! 😉

Hey, I may never find the truth but I will keep looking and deliver what I find with honesty.