Former Prime Minister of Malaysia: ‘Muslims Have A Right To Be Angry & To Kill Millions Of French People’

The Koran admonishes the fight against unbelievers in world domination in the name of Islam.  It was what the founder of Islam, Muhammad, wrote, taught and lived as an example before his followers.  So, it should come as no surprise that those who truly follow the Koran think it just fine to murder innocent people who have done them no harm.  The latest example is the former prime minister of Malaysia, Dr. Mahathir Mohamad in recent tweets following the jihad attack on a schoolteacher in France.

13. Since you have blamed all Muslims and the Muslims’ religion for what was done by one angry person, the Muslims have a right to punish the French. The boycott cannot compensate the wrongs committed by the French all these years.https://t.co/ysZeXDrQ09

This significant escalation of the rhetoric from a revered Muslim leader is almost certain to lead to more bloody jihad attacks.

You’ll also have to note the hypocrisy of Twitter CEO Jack Dorsey, who spoke about censoring violent content while allowing this to remain up.

Twitter CEO Jack Dorsey on Wednesday said his platform allows Iran’s supreme leader, Ayatollah Ali Khamenei, to fulminate against “cancerous” Jews because he wanted to “respect” his “right to speak.”

“We believe it’s important for everyone to hear from global leaders, and we have policies around world leaders,” Dorsey said in testimony before the Senate Commerce Committee, responding to a question from Chairman Roger Wicker (R-MS) about the messages. “We want to make sure we are respecting their right to speak and to publish what they need. But if there is a violation of our terms of service, we want to label it.”

Wicker interjected to note the messages still appear on Twitter without a label. Dorsey said he found them permissible because Khamenei was threatening citizens of other countries rather than citizens of Iran. 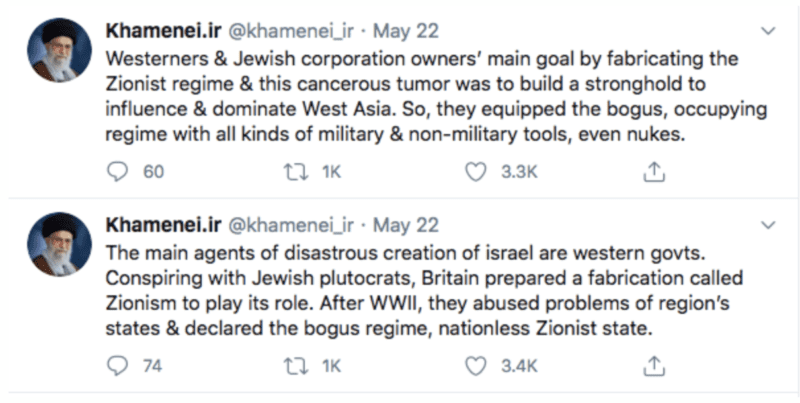 “We did not find those to violate our terms of service, because we considered them saber-rattling, which is part of the speech of world leaders in concert with other countries,” Dorsey said. “Speech against our own people, or our country’s own citizens, we believe is different and can cause more immediate harm.”

Khamenei has used Twitter to write numerous messages that have drawn attention this year. He used the platform in July to promise a “reciprocal blow” to the United States for the January killing of Qasem Soleimani, the leader of Iran’s Revolutionary Guard Corps, and previously referred to Israel’s “Zionist regime” as a “cancerous tumor” that needed to be “eliminated.”

Republicans have widely questioned Dorsey’s decision to allow the tweets. Ric Grenell, who served as a director of national intelligence under President Donald Trump, told Mediaite in July that he wanted Congress to investigate the matter, saying Twitter was being “used by terrorists around the world” to deliver messages of “hate and violence.”

Watch above via the Senate Commerce Committee.

One user pointed out the following.

Do they not glorify violence?
Will they at least be getting warning labels?

This tells you exactly whose side Dorsey is on.

Sadly, the do nothing impotent Congress, as usual, did nothing and will do nothing because the people have not held their representatives accountable.

Don't forget to like SonsOfLibertyMedia.com on Facebook and Twitter.
The opinions expressed in each article are the opinions of the author alone and do not necessarily reflect those of SonsOfLibertyMedia.com.
Previous Post:
The History Voters Have Seen Will Determine Election’s Outcome
Next Post:
Major Second Amendment Wins In Michigan & Washington – Guns Welcome At Polls

With America already going through the 10 stages of genocide, doctors warn we’re about to see one of the biggest die-offs of all time
November 28th, 2022 DC Clothesline