We have warned about Florida Ron DeSantis from his claim that he killed Common Core, which was a lie, to his alleged being against mandatory vaccinations despite leaving in place the ability for the state to force vaccinate should they deem it so.  Well, recently, DeSantis came out and declared that the experimental COVID shots are killing people, but he has yet to put a stop to them in the state of Florida. Why?

In reporting on two politicians mentioning COVID shot deaths on December 13, 2022, Brian Shilhavy wrote about Governor DeSantis and asked why he has not put a stop to these deadly and dangerous, ineffective, experimental shots in his state.

He began with a public discussion in Florida, which he led, alongside his Surgeon General, Dr. Joseph Ladapo.

This public discussion also included other medical doctors, and alleged victims who had suffered from taking a COVID-19 “vaccine.”

He starts out by stating the corporate media is not accurately reporting on the COVID shots because they are also taking money from the drug companies who produce them.

He then discusses a study of people who “died suddenly” within a few weeks of being injected with a COVID shot, which showed a high rate of myocarditis that were attributed to mRNA COVID “vaccines.”

Ladapo has also previously reported that statewide analysis of vaccinated Florida residents aged 18 years or older found an 84 percent increase in the relative incidence of cardiac-related deaths among males aged 18–39, within 28 days of mRNA vaccination.

So what is Dr. Ladapo’s call to action as Florida’s Surgeon General now that he knows that the COVID-19 “vaccines” are killing people?

We are initiating a program here in Florida where we will be studying the incidence in surveillance of myocarditis within a few weeks of COVID-19 vaccination for people who died.

Governor DeSantis was interviewed on Fox News later that night to discuss the round table discussion.

In this interview DeSantis admits that the “medical establishment” never warned the American people about the “drawbacks” of the COVID-19 shots, and he also acknowledges the research of his Surgeon General Dr. Ladapo who has showed people are dying from the COVID-19 shots. He also mentions that in Norway they have banned the COVID shots for everyone under 50 years old, because the drawbacks outweigh the benefits, and that there was an increase in all-cause mortalities.

So what is Governor DeSantis’s call to action?

He is asking the Florida State Supreme Court to convene a Grand Jury to look into the drug companies that produced the shots, and “hold them accountable.”

AND EVERYONE IN THE RIGHT WING ALTERNATIVE MEDIA CHEERED, while people in Florida continue to get the COVID-19 shots, and give them to their children who continue to die and become crippled.

Both DeSantis and Ladapo also bragged about their past actions “against” the COVID shots in this round table discussion. DeSantis goes out of his way to talk about how he opposed mandates, and allowed the people in Florida to “make their own decisions” about getting the shots and giving them to their children.

Ladapo bragged about the fact that back in March this year he was the first Surgeon General to not recommend the COVID shots for children. We covered that story back in March, and I said then that this was a meaningless action, and that potentially even MORE children could end getting the shots since they were politicizing it. See:

What have been the results, therefore, of Governor DeSantis opposing COVID “vaccine” mandates, and Dr. Ladapo not recommending the shots for children since March of this year (2022)? 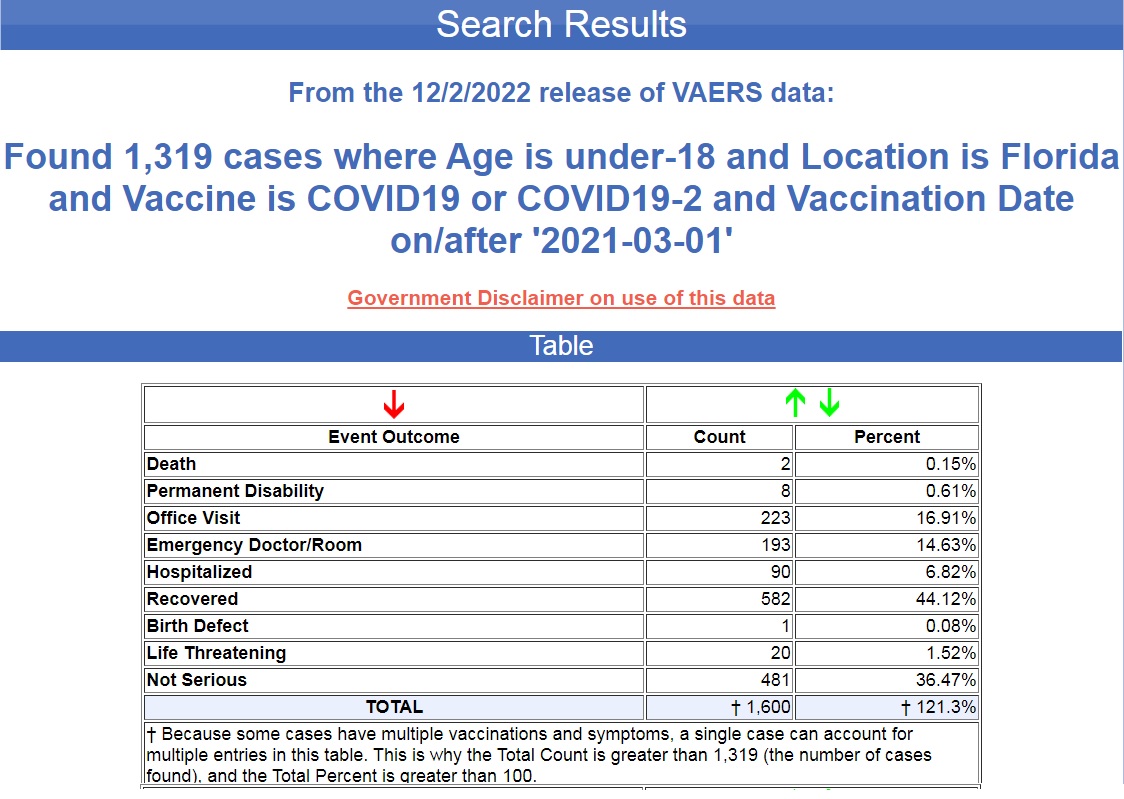 The results are that children continue to die and be injured by the shots. The U.S. Government Vaccine Adverse Events Reporting System (VAERS) currently shows 1,319 children in Florida injured following the shots, including 2 deaths, 8 permanent disabilities, 193 ER visits, 90 hospitalizations, and 20 life threatening events.

And remember, VAERS contains less than 1% of total vaccine adverse events (source), so the real numbers of children who have suffered in Florida since March of this year are closer to 132,000 with 200 deaths.

Now some may try to argue that these numbers would be much higher if DeSantis did not stop the mandates, and Ladapo did not stop recommending them, although that is almost impossible to prove.

But if Governor DeSantis had issued an executive order to STOP all COVID shots in his state, then these numbers would ZERO!

Why hasn’t he done that? And why does everyone in the Alternative Media continue to praise DeSantis and Ladapo when they are clearly allowing children and others to continue dying and being harmed by these shots?

Even the CDC has said publicly that they do NOT enforce vaccine policy at the state level, but that the States do, from the Governor to the Surgeon General to the local Public Health Departments. See:

So Governor DeSantis, and all 49 other governors, most certainly could STOP this carnage of the bioweapon COVID shots IMMEDIATELY, but they refuse to do so.

These guys are NOT heros! They are CRIMINALS!

Additionally, UK MP Andrew Bridgen also spoke on December 13 and laid out the reasons why the COVID shots should stop now.

One highlight in Bridgen’s speech was that a prominent British Heart Foundation leader conspired to coverup linking the mRNA shots with heart inflammation.

Do you still think Ron DeSantis is who the conservative media is telling you he is?  Do his words match his actions or is the fruit he is bearing corrupt?

Don't forget to like SonsOfLibertyMedia.com on Facebook and Twitter.
The opinions expressed in each article are the opinions of the author alone and do not necessarily reflect those of SonsOfLibertyMedia.com.
Previous Post:
Police ‘Protect’ Town by Arresting Elderly Women for Feeding Stray Cats, Neutering Them, & Getting Them Adopted
Next Post:
Respect For Marriage? Where Did Congress Derive Authority To Define Marriage? (Video)