The longer we go and the more the data emerges, the more I believe the people need to ready themselves, and build a lot of gallows, for the criminals at Big Pharma, along with their corrupt politicians who have been pimping their deadly, experimental COVID shots.  Data has revealed what appears to be murderous intent on the part of Pfizer, and subsequently the Food and Drug Administration, when it comes to the deadly shots. 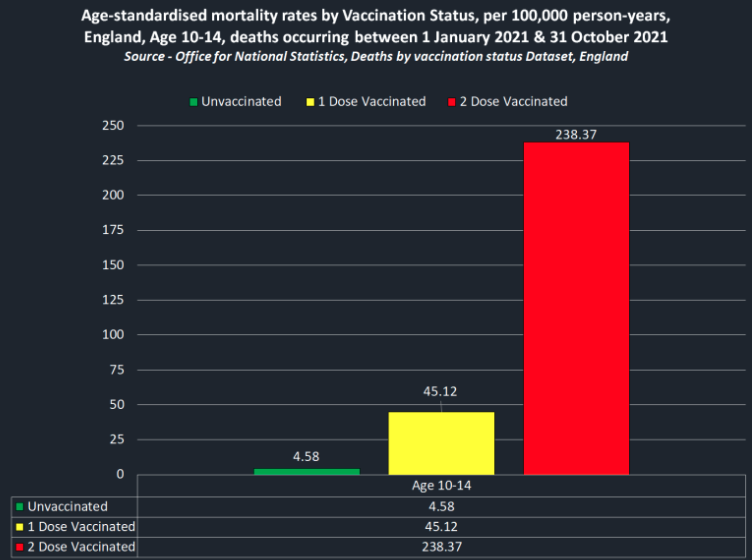 Children’s Union has the story.

An analysis of ONS data has shown that children are 52 times more likely to die after a covid shot than ‘unvaccinated’ children. In addition, the data, shows that the risk increases rapidly for younger children, and for second doses.

In addition, the analysis of the government’s official data (which you can read in full here) shows that the second vaccine shot radically increases the chances of death. After the second shot, the risk rises to 300% for the older teenagers, and 5,200% for those under 14 years – based on a death rate of 238 per 100,000 person years.

However, even this grossly understates the true risk for several reasons.

The figures include children between 10 and 11 years old, an age group that is not eligible for vaccination in the UK. In addition, deaths within two weeks after vaccination are added to the unvaccinated count, not the vaccinated count, even though about half of all vaccine deaths occur in this period.

The failure of the mainstream news services to report on this should be shocking, if it did not follow a consistent pattern of ignoring all evidence that would detract from the sale of pharmaceuticals and government policy.

In addition, the Daily Expose’s analysis was in spite of the recalcitrant behaviour of the ONS and obfuscation in its presentation and reporting. According to the Daily Expose, the ONS inadvertently released enough details on deaths along children and adults in its Deaths by Vaccination status dataset.

Furthermore, the UK government had been sitting on the data for more than a month, allowing children and teenagers to continue to be vaccinated, while secretly adding up the resulting deaths. For a disease that does not kill them.

It is beyond my comprehension how seared the consciences of many people are when it comes to the unnecessary deaths of people, whether they be young, old or in between and how very few are putting together the commonality between them:  The COVID mRNA shots.

Justice must be brought swiftly in this matter if we are to protect the innocent.

Don't forget to like SonsOfLibertyMedia.com on Facebook and Twitter.
The opinions expressed in each article are the opinions of the author alone and do not necessarily reflect those of SonsOfLibertyMedia.com.
Previous Post:
Bombshell: Three Years Before Plandemic Began, Moderna Patented Sequence Found In Alleged “Virus”
Next Post:
Head To Toe Deficiencies & Correcting Them With Kate Shemirani (Video)