Here’s What We Learned During The Grocery Store Rebellion

Editor’s Note: When I first wrote this article, in 2014, we lived in farm country in California, had our own garden and chickens, and we did it mostly as an experiment. Today, this experiment is actually of vital importance. It shows that in many parts of the country, it’s possible to get nearly all your food from nearby sources. And right now, in 2022, with massive supply chain issues, this is more important – and perhaps essential – than ever before. ~ Daisy

(Originally published August 7, 2014.) My family and I decided to embark on a revolution. We have banished the grocery store from our lives for the next 3 months.  Our Grocery Store Rebellion began on August 1, and this is an update on our first week.

The week began with two major upheavals. Our SUV went into the shop, and the cow in which we have milk shares died.

Luckily, we had some extra milk on hand, frozen, while our dairy farmer works on getting a new cow. We have about a 2 week supply of milk left, so we’re either going to have to wait, find a new source, spend a whopping $18 per gallon at the local co-op, or go without.

The repair facility gave us a loaner so we were able to make the rounds to some farms in our area. All of the food we purchased this week is from within 5 miles of our home. When we pick up our milk, we go further afield – the dairy farmer we deal with lives about 10 miles away.

My garden this year is very small. We moved at the beginning of July so we were off to a late start. Still, we have some stuff for salads and lots of my favorite jalapeno peppers.  This produce came in very handy over the week of being carless. We live in a very small village that only has a small corner store type of market, so even if we had wanted to buy food, there would have been little to purchase within walking distance.  This situation really motivated me to get my fall garden going, and we are halfway to chickendom with the arrival of our new coop.  We’ll finish fencing off the chicken area this weekend, grab some barley for fodder, and we’ll be well on our way to egg independence.

(Make sure you check out our free QUICKSTART Guide to setting up your 3-layer food storage plan.)

Here’s what we ate this week.

Local items, including stuff from my garden, are marked with a star *. Freezer items are marked with an (F). Pantry items are marked with a (P).  We are using up the items lingering in our refrigerator, like cheese, because even though these things don’t fall within our “local” parameters, I refuse to waste food. Some items have more than one designation, like the fruit leather. It was made from Apple cinnamon pie filling I canned last fall, which I made from apples we picked at a local orchard.  We went out to dinner one night, and some meals were repeated because we ate leftovers.

Potato* soup with fresh cream*, onion* and garlic*, topped with bacon (F) and cheddar* (from the farmer’s market)

Zoodles* with alfredo sauce made from raw milk* and garlic* (recipe)

Here’s what we bought this week.

Once I finally got something to drive, we took a drive yesterday to some local farms.  One place has a farm stand that is run on the honor system. The lovely little farm has a garden shed with produce, a scale and a box.  You are allowed to help yourself to change if needed, or you may leave a check. I got some seconds of peaches at a local orchard, and some seconds of jalapenos at another farm stand.

We spent $89 yesterday. Here’s what we bought. 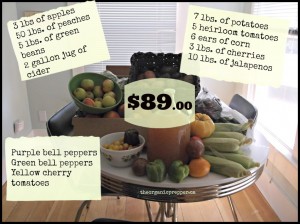 This weekend we are heading to the farmer’s market to make the acquaintance of a man that sells meat, which he raises in the next town over. I’ve budgeted $60 to spend there, which will bring us up to $150 for the week.

It may seem like we’re spending a huge amount of money, especially considering that we haven’t yet purchased meat, but a great deal of this will be canned or dehydrated for use later in the year. I feel like we’re well within the normal range of what many people spend on groceries, and those groceries are only to last through the week.  We could have gotten by on a whole let less money but much of this is earmarked for the canning pot and will be consumed later, so the money we spent this week will actually cover us for a longer period of time than just a week.

I tend to spend more money on food in the summer, when it’s fresh and ripe, and then preserve it for the winter, when everything is outrageously expensive. This evens out over the course of the year and I believe that by using this method we spend far less per person than many people do.

Here’s what we learned.

This week was, of course, the easiest week because we still have “grocery store” stuff left over.  We’re still eating the items that are open, like some gluten-free crackers, organic peanut butter, some cheese, and some organic cereal because I have no intention of letting it go to waste.  The crackers are gone now (which rules out my previous go-to breakfast of peanut butter and crackers with fruit).  We’ll have to make some scratch items if we want any instant gratification snacks that aren’t fruit or veggies from this point on.

I found an orchard that I hadn’t seen before that had amazing prices on “seconds”.  If you aren’t familiar with this, seconds are fruits that aren’t quite as uniform and pretty as what most people are looking for. They might be bruised or have a funky shape. Sometimes the skin has a dry patch that is unattractive.  When you’re canning or making jam, “pretty” fruit is far less important than it is when it’s eaten fresh from a bowl on the counter. That being said, much of the fruit we purchased was perfectly fine for fresh snacking.  The seconds were not out on display with the other fruits, so always be sure to ask farmers if they have “seconds” for canning. Some of the best bargains I’ve gotten have been when I ask this question of a vendor at a farmer’s market. Sometimes you have to set up a time to go to the farm and pick these items up. ALWAYS ASK!

Some good quality kitchen tools will make your life far easier when cooking farm-fresh goodies. It isn’t impossible to make these foods without the tools I’m recommending but when you have them, the work goes a lot faster. Here are the things I swear by:

Ensemble 3-Cup Glass Bowl Chopper – This is one of the less expensive food processors. I’ve had mine for quite some time and I really like the solid glass container.  It makes fast work of chopping lots of veggies for canning projects.

Vitamix Certified Reconditioned Standard Blender, White – I have an older one exactly like this and it is 14 years old and still going strong. It makes a beautiful puree and can grind hard things like wheatberries using the dry canister.

Granite Ware 0718-1 Enamel-on-Steel Canning Kit, 9-Piece –  This is a must for canning low-acid foods like pickles, salsas, fruits, and jams.  I don’t have all of these bells and whistle add-ons, but they’re nice perks.

We decided to use up the home-canned goods we have left over from last year. We pureed all of the fruit and made various types of fruit leather. This makes quick, yummy snacks, and frees up jars for this year’s harvest.

As we began to run out of open packets of things like cereal and crackers, we had to adjust to reaching for a different type of quickie in between meals.  I love seeing my daughter and her friends walk around with a handful of cherries as a snack. At mealtimes, the food we’re eating is so fresh and flavorful that it really doesn’t need much to dress it up – just a quick steam and some butter. My daughter raves about everything put in front of her and I certainly don’t have to ask her twice to finish what’s on her plate.

How was your week?

Even if you aren’t jumping into the rebellion with both feet, did you use some things you harvested from your garden this week?  If you ARE participating in the rebellion, how did it go? Share the details in the comments below!

Don't forget to like SonsOfLibertyMedia.com on Facebook and Twitter.
The opinions expressed in each article are the opinions of the author alone and do not necessarily reflect those of SonsOfLibertyMedia.com.
Previous Post:
If You Want to Punish Disney, Take Away Mickey Mouse
Next Post:
While Calling COVID Jab Skeptics “Criminals,” Pfizer CEO Raked In $24 Million On The Backs Of Taxpayers

<a href="https://amzn.to/2WQNoN1"Daisy Luther is a freelance writer and editor. Her website, The Organic Prepper, offers information on healthy prepping, including premium nutritional choices, general wellness and non-tech solutions. You can follow Daisy on Facebook and Twitter, and you can email her at daisy@theorganicprepper.ca