The Council on American-Islamic Relations (CAIR) is not only an unindicted co-conspirator in a Hamas terror funding case that was prosecuted by the Justice Department, but they have also been designated by the United Arab Emirates as a terror group and by being a front group for the Muslim Brotherhood, Egypt has designated them as that as well.  This is why it is so atrocious that Houston Mayor Sylvester Turner would align himself with enemies of America and enemies of his own people, which tells you a lot about Mr. Turner.  However, that is just what he did when he made a proclamation that December 9 would be “CAIR-TEXAS, Houston Day,” which makes him an enemy of the people.

Here’s the proclamation and the text that follows. 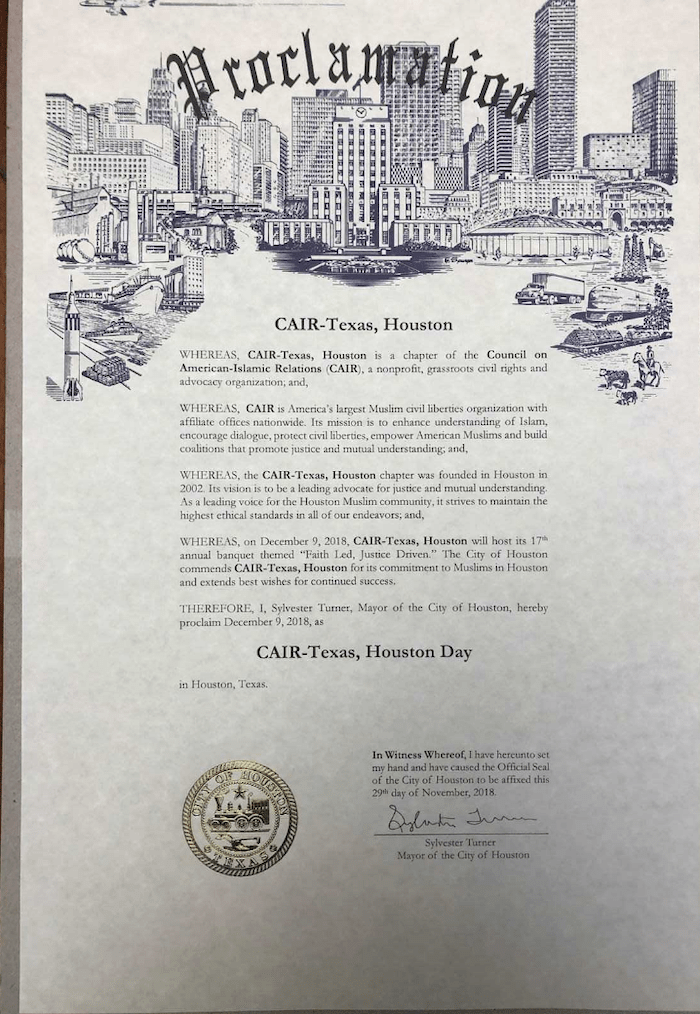 Whereas, CAIR-Texas, Houston is a chapter of the Council on American-Islamic Relations (CAIR), a nonprofit, grassroots civil rights and advocacy organization; and,

Whereas, the CAIR-Texas, Houston chapter was founded in Houston in 2002.  Its vision is to be a leading advocate for justice and mutual understanding.  As a leading voice for the Houston Muslim community, it strives to maintain the highest ethical standards in all of our endeavors; and,

Whereas, on December 9, 2018, CAIR-Texas, Houston will host its 17th annual banquet themed “Faith Led, Justice Driven.”  The City of Houston commends CAIR-Texas, Houston for its commitment to Muslims in Houston and extends best wishes for continued success.

Therefore, I, Sylvester Turner, Mayor of the City of Houston, hereby proclaim December 9, 2018, as

Just remember, Herman Mustafa Carroll, executive director of the Dallas-Fort Worth CAIR branch, right there in Texas declared, “If we are practicing Muslims, we are above the law of the land.”

Let’s not forget that this is the same organization that time and again has come to the defense of fake Muslim hate, which Muslims have inflicted on themselves in order to gain sympathy, and Texas experienced it firsthand with “clock boy,” Ahmed Mohamed.

Furthermore, though Muslims in America often try and hide the fact that they want to advance Sharia, the fact of the matter is that when Texas was looking at anti-foreign law, mainly to deal with Sharia, the Muslims came out of the woodwork to oppose it, including CAIR.

Add to that the fact that CAIR officials have repeatedly refused to denounce Hamas and Hizballah as terrorist groups.

Several former CAIR officials have been convicted of various crimes related to jihad terror. CAIR’s cofounder and longtime Board chairman (Omar Ahmad), as well as its chief spokesman (Ibrahim Hooper), have made Islamic supremacist statements about how Islamic law should be imposed in the U.S. (Ahmad denies this, but the original reporter stands by her story.) CAIR chapters frequently distribute pamphlets telling Muslims not to cooperate with law enforcement.  CAIR has opposed virtually every anti-terror measure that has been proposed or implemented and has been declared a terror organization by the United Arab Emirates. Ayloush himself in 2017 called for the overthrow of the U.S. government.

The Islamists in Texas have already tried to unlawfully set up their own tribunals in the state.  They obviously ran into problems when not a single one of the attorneys in the tribunal possessed a law degree.

CAIR is not looking for justice nor equal protection under the law.  Have you seen them represent Christians?  Offer to do so?  Have they come to the aid of any other group other than the followers of Muhammad and his damnable doctrines in Islam?  Nope, not once.

In fact, they are looking for “Islamophobes” under every rock, or should I say every truck, they can turn over.  They are not interested in defending white people at all.  No, they are the targets, even though Muhammad was as white as me, or more so, according to Islam.

However, the mayor just wished these people, who are advancing jihad on a political and societal front, “continued success” in advancing Sharia and Islam in Houston.

Houston children, when you grow up and the Muslims outnumber you and begin to inflict harm against you and great injustices, just remember the name, Sylvester Turner.

I will not invite anti-Christ Muslims (1 John 2:18; 2:22; 4:3; 2 John 7) into my home, nor into my country and then turn around and do the very thing we are commanded not to do, and that is to bless them and wish them well in their endeavors.  That is a fool’s errand, and Mayor Turner has just told everyone whose fool he is.

Don't forget to like SonsOfLibertyMedia.com on Facebook and Twitter.
The opinions expressed in each article are the opinions of the author alone and do not necessarily reflect those of SonsOfLibertyMedia.com.
Previous Post:
With An Extradition of Huawei’s CFO To The US, Would It Mean The Clock Is About To Run Out On The Clintons?
Next Post:
Harvard Grad Student Told To Move Out Of Apartment Due To Roommate Being “Uncomfortable” With Her Legally Owned Guns