The Democrats won’t say a word about this. They have already learned that nothing negative whatsoever can be said about Omar, on pain of charges of “Islamophobia.” And support for Hamas-linked CAIR is mainstream among the Democrats.

They routinely appear at CAIR events and have no apparent interest in what the group is all about.

CAIR is an unindicted co-conspirator in a Hamas terror funding case — so named by the Justice Department.

CAIR officials have repeatedly refused to denounce Hamas and Hizballah as terrorist groups. 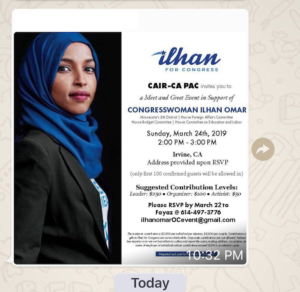 Democratic freshman Rep. Ilhan Omar (D., Minn.) has been holding a series of secret fundraisers with groups that have been tied to the support of terrorism, appearances that have been closed to the press and hidden from public view.

The content of these speeches, given to predominately Muslim audiences, remains unknown, prompting some of Omar’s critics to express concern about the type of rhetoric she is using before these paying audiences, particularly in light of the lawmaker’s repeated use of anti-Semitic tropes in public.

Omar recently spoke in Florida at a private event hosted by Islamic Relief, a charity organization long said to have deep ties to groups that advocate terrorism against Israel. Over the weekend, she will appear at another private event in California that is hosted by CAIR-CA PAC, a political action committee affiliated with the Council on American Islamic Relations, or CAIR a group that was named as an unindicted co-conspirator in a massive terror-funding incident.

Omar’s appearance at these closed-door forums is raising eyebrows in the pro-Israel world due to her repeated and unapologetic public use of anti-Semitic stereotypes accusing Jewish people of controlling foreign policy and politics. With Omar’s popularity skyrocketing on the anti-Israel left, it appears her rhetoric is translating into fundraising prowess.

It remains unclear what Omar has told these audiences in her private talks. Washington Free Beacon attempts to obtain video of past events were unsuccessful, and multiple local news and television outlets in the Tampa, Fla., area, where Omar spoke to Islamic Relief last month, confirmed they were unable to gain access to the closed door event.

Islamic Relief has come under congressional investigation for what lawmakers have described as its efforts to provide assistance to terrorist group such as Hamas and the Muslim Brotherhood. The charity has been banned by some countries as a result of these ties.

In 2017, Congress sought to ban taxpayer funds from reaching the charity due to these terror links.

A representative from Islamic Relief declined to provide the Free Beacon with any material related to Omar’s appearance.

“The event was closed to the media. No materials are available,” the official said.

On Sunday, Omar will hold another meet and greet in Irvine, Calif., for CAIR-CA PAC. Those wishing to hear Omar speak are being asked to donate anywhere from $50 to $250 dollars, according to a flyer for the event.

The CAIR event also appears closed to the press. Free Beacon attempts to contact the organizer and obtain access were unsuccessful. Requests for comment on the nature of the speeches sent to Omar’s congressional office also were not returned.

CAIR, a Muslim advocacy group known for its anti-Israel positions, was named by the U.S. government as part of a large network of groups known to be supporting Hamas….

Don't forget to like SonsOfLibertyMedia.com on Facebook and Twitter.
The opinions expressed in each article are the opinions of the author alone and do not necessarily reflect those of SonsOfLibertyMedia.com.
Previous Post:
Judge Tossed Right To Sue Rape Victim – Florida Attorneys Still Pursue Her, Threaten Arrest
Next Post:
Catastrophic Flooding In Midwest Could Last “For Months” – Dramatic Drop In US Food Production Ahead

Little-Known FACT: Nord Stream REPAIRS Were Happening Back in JULY, Well BEFORE The Explosions… Could Something Have Gone Wrong?
October 3rd, 2022 DC Clothesline