Newly obtained social media posts from the accounts of Ilhan Omar, who is currently serving as a Congresswoman for Minnesota’s 5th Congressional District, reveals that she and Keith Ellison, who currently serves as Minnesota’s Attorney General, championed voter fraud by encouraging people in Minnesota to “Vote Twice”.

Omar, who is a self proclaimed refugee from Somalia, represents an immigrant heavy district that now holds the title as the number one terrorist recruitment state in the United States. According to the FBI, “more men and boys from a Somali American community in Minneapolis have joined – or attempted to join – a foreign terrorist organization over the last 12 years than any other jurisdiction in the country.” Due to the heavy Islamic influence in Minnesota, a direct result of the Democrat’s pro-immigration policies that have allowed for the importation of hundreds of thousands of refugees to be resettled in Minnesota, Omar’s district has become a popular destination for ISIS terrorists and illegal aliens who wish to undermine the safety and integrity of the American political system.

In a picture posted on her Instagram on October 21, 2012, Omar is seen wearing an hijab while holding a banner that says, “Be nice, VOTE NO Twice. WE don’t need Voter ID.”

Keith Ellison is standing directly next to her in the same picture. 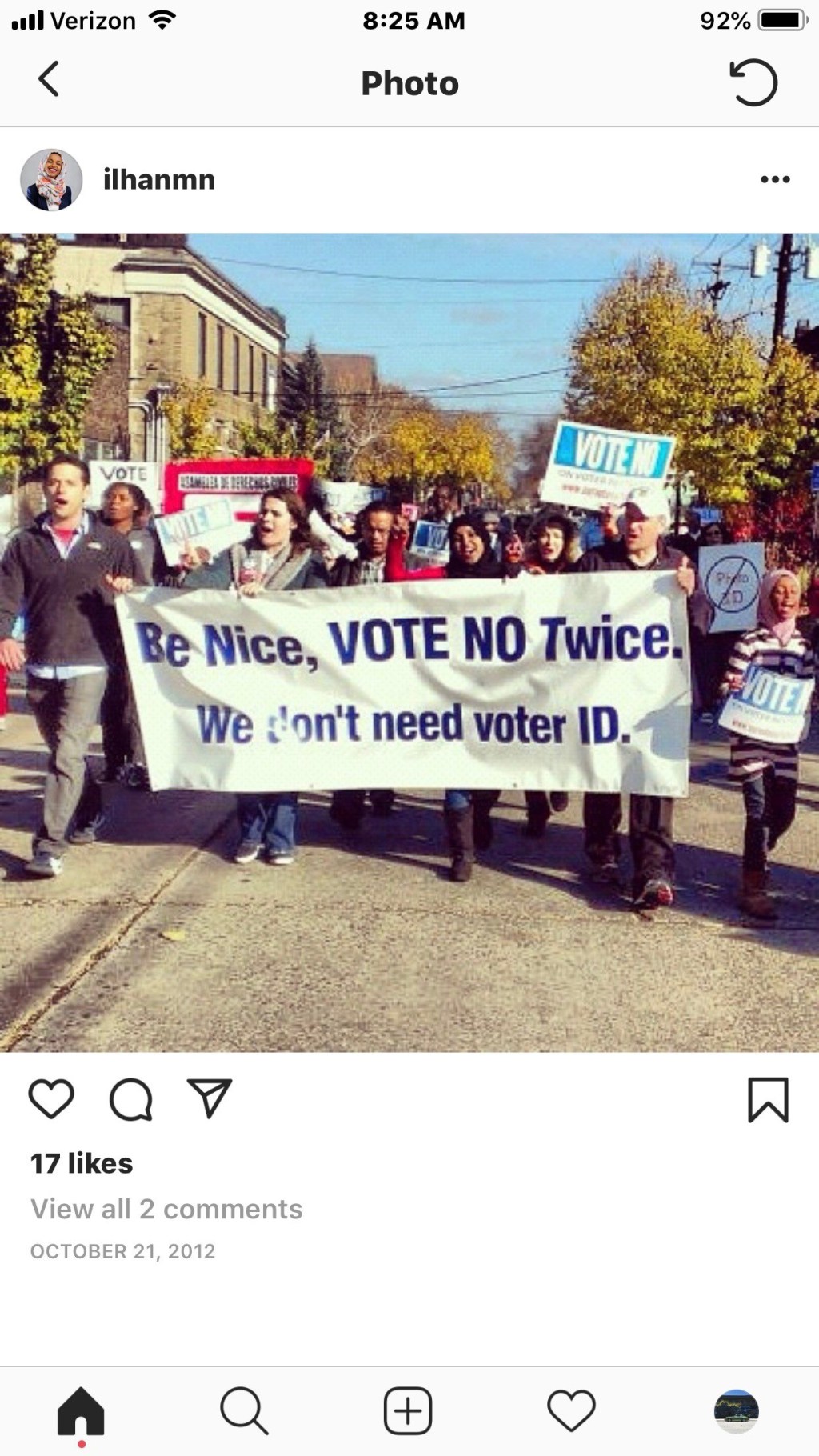 Trending: #WhiteHouseSiege – This Group Plans to “Lay Siege to” and “Occupy” the White House Next Month

Omar and Ellison’s calls to ban voter identification laws, along with their demands for people in Minnesota to “vote twice” is proof that they do not respect voter laws, and are eager to help themselves and other Muslim Democrats win elections through mass voter fraud. One of the main reasons why voter ID is necessary is to prove that those who vote are legal US citizens.

One vote per person. That is the law.

In Minneapolis, Democrats have vigorously advocated for illegal aliens to receive municipal ID cards. The process of giving illegals IDs has already been implemented in other Democrat controlled cities like New York City and Chicago where lawmakers have championed open borders

If the Democrats believe that it is necessary for illegals to have IDs, then why are they calling for these same people, who by the law don’t have the right to vote in or participate in US elections, to not show ID when they vote?

If you have an ID, why not show it? The only reason why one would not want to show their ID is if their ID was fake, or if they are pretending to be someone other than the name of their ID. 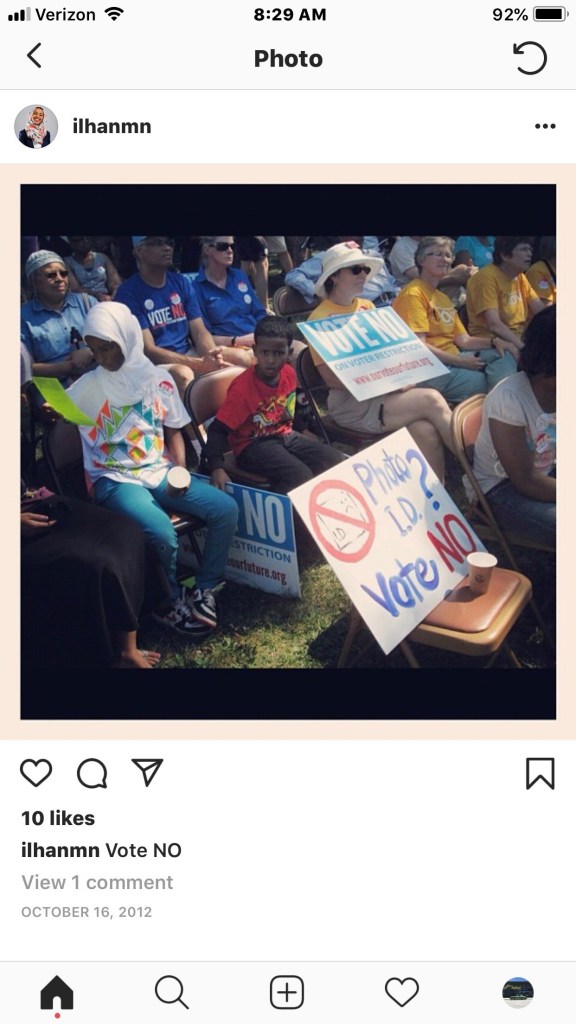 Minnesota taxpayers spend over $734 million a year on illegal immigrants according to a study released by the Federation for American Immigration Reform (FAIR), a Washington D.C. based nonprofit dedicated to studying immigration issues.

The report, “The Fiscal Burden of Illegal Immigration on United States Taxpayers (2017)” states on a national basis that illegal immigration is costing U.S. taxpayers $134.9 billion a year.

There is a reason why Democrats advocate for illegals and against voter ID laws. The Left relies on immigrant populations and illegals to win elections. But, these same people will tell you, “voter fraud doesn’t exist”.

In Minnesota, the practice of same day registration is legal and widely practiced in elections. How is one supposed to confirm the identity of millions of people without ID if they are permitted to register and vote on the same day without showing ID?

It’s not possible, and the Democrats realize this is a loophole in the elections process which could allow for rampant voter fraud, especially among the illegal immigrant and refugee communities. 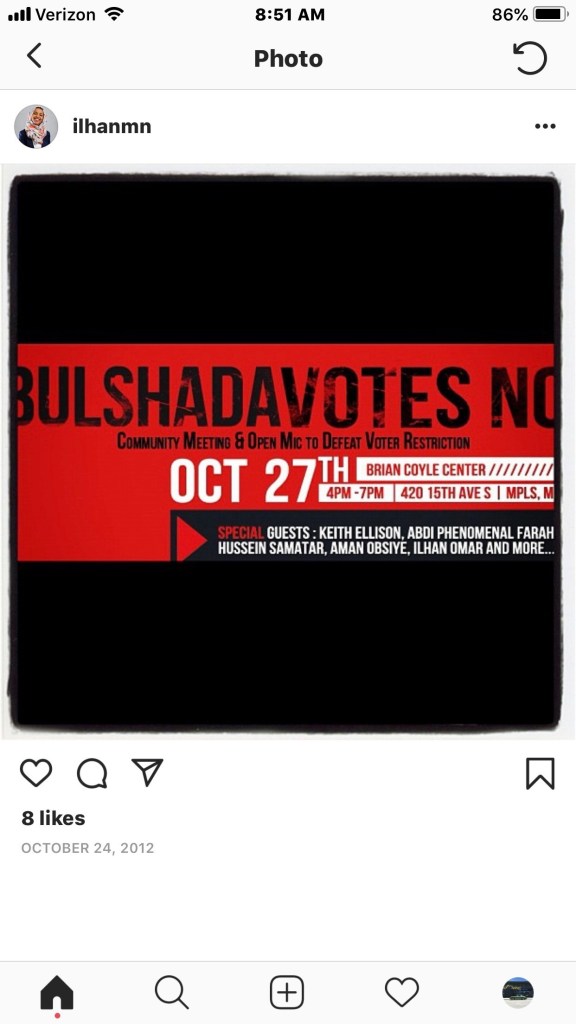 It was estimated in 2014 that there were about 91,000- 95,000 illegal aliens living in Minnesota. Given that this estimate was taken five years ago, the number of illegals living in Minnesota has surely increased to well over 100,000, especially given the fact that Minnesota now has a pro-open borders Governor, attorney general, Senator, and Somali congresswoman who have all expressed political support for the undocumented and refugee communities.

As a state, Minnesota has the highest number of refugees per capita in the United States, according to the U.S. Census and refugee-support agencies. Ilhan is one of nearly 100,000 Somalis who currently live in Minnesota, many of whom are also refugees.

Recognizing the threats refugee importation causes the United States, including threats of voter fraud, terrorism, and tax-payer financial burdens, President Donald Trump signed an executive order shortly after his inauguration in January of 2017, which barred all refugees for four months. He later announced the government would reduce the number of incoming refugees to 45,000 for 2018, a 59 percent drop from the 110,000 goal set under the Obama administration.

Like many other Democrats, Omar recognizes that the Somali refugee population is a major reason why she was elected as the first Muslim woman in Congress. Somalia is a Muslim country that is known for being a hotbed of Islamic terrorism. While many in the Somali community have made little to no efforts towards assimilation upon arriving in the United States, their presence as a whole is greatly impacting both state and national politics.

Following 9/11/01, Americans would not have believed that we would ever have jihadi Muslim representatives in Congress. However, Minnesota is a sobering example of how quickly an Anglo-American midwestern state can quickly become a petri dish for Sharia Law and Islamic jihad through the process of population displacement.

Like Omar, Keith Ellison, relies on the Somali immigrant community for votes. Following his election victory in 2006, Ellison said, “The [Somali] community showed up big!” The New York Times confirmed in 2006 that Ellison’s election victory, which made him the first Muslim ever elected to Congress, was largely due to Somalis.

In a 2006 New York Times article titled “Democrat Poised to Become First Muslim in Congress”, it was reported,

“Ellison thanked the many immigrant Somalis whose votes had helped him beat six other candidates in a primary race in September. Mr. Ellison, a stocky criminal defense lawyer who converted to Islam in college, is expected by experts to make history on Election Day by becoming the first Muslim elected to Congress, as well as the first black representative from Minnesota.“If he wins, he will take the oath of office on a Koran,” Ali Ahmed, a social services worker, said as he wandered through the Karmel Square mall, a popular shopping and social destination for Somali immigrants. “Our main concern is that Muslims are treated differently from Christians,” Mr. Ahmed said.”

Given that so many members of Minnesota’s Somali community are refugees, how many of them are legal US citizens?

In 2014, Minnesota Rep. Phyllis Kahn, a Democrat, filed a complaint regarding potential voter fraud in her race against Somali challenger Mohamud Noor. Khan’s petition included complaints of improper voter registration among members of the Somali community and accused the Somali elections judge in Minneapolis of using anti-Jewish rhetoric to get Somali voters to voter for the Somali candidate.

“Kahn’s campaign filed a petition with the state Supreme Court alleging that Minneapolis election judge Fadumo Yusuf favors Noor, and asked voters at city hall if they wanted to vote for  “our Somali brother” or “the old Jewish lady.” Under state law, election judges must be neutral. Yusuf is denying the allegations.”

Both Omar and Noor are Somali.

To vote in a US election, you MUST be a US citizen.

Voter fraud is not a conspiracy.

In 2016, a voter fraud case before the Minnesota Supreme Court claimed 1,366 ineligible felons cast at least 1,670 fraudulent votes in statewide elections, possibly tipping the outcome of close contests, including the 2008 U.S. Senate race.

In 2017, three Minnesota Men were charged with voter fraud.

In 2018, Hannan Yassin Aboubaker, an immigrant woman who was living in Minnesota plead guilty to voting in the 2016 US election Twice. The woman voted absentee in Minnesota and in person in Fargo, North Dakota.

Words have consequences. Was Aboubaker influenced by Omar and Ellison’s call to vote twice?

Time will only tell how the upcoming 2020 presidential election will pan out in Minnesota this year with Omar and Ellison in charge. But, from the look of Omar’s social media posts that encourage voter fraud, and Ellison’s current plans to challenge President Trump’s immigration policies so that 110,000 more Somalis can be imported into and resettled throughout Minnesota, it’s safe to say Minnesota is facing a serious election integrity problem that is rapidly transforming the demographics and politics of the midwest.

Don't forget to like SonsOfLibertyMedia.com on Facebook, Google+, & Twitter.
The opinions expressed in each article are the opinions of the author alone and do not necessarily reflect those of SonsOfLibertyMedia.com.
Previous Post:
Leading Jewish Groups Demand Rep. Ilhan Omar Be Removed From Foreign Affairs Committee
Next Post:
The State of the Democrat Party