Religious Affairs Minister Yaqut Cholil Qoumas says: “Whatever the motive is, this attack cannot be justified by any religion because it only does harm to other people.”

We see the same apologetics for Islam and obfuscation about jihad the world over.

“Against them make ready your strength to the utmost of your power, including steeds of war, to strike terror into the hearts of the enemies of Allah and your enemies…” (8:60)

“When your Lord was revealing to the angels, ‘I am with you; so confirm the believers. I shall cast terror into the hearts of the unbelievers; so strike the necks, and strike every finger of them!” (Qur’an 8:12)

“We will cast terror into the hearts of those who disbelieve for what they have associated with Allah of which He had not sent down authority. And their refuge will be the Fire, and wretched is the residence of the wrongdoers.” (Qur’an 3:151)

“And kill them wherever you find them, and drive them out from where they drove you out; persecution is worse than slaughter. But fight them not by the Holy Mosque until they should fight you there; then, if they fight you, kill them — such is the recompense of unbelievers, but if they give over, surely Allah is all-forgiving, all-compassionate. Fight them until there is no persecution and the religion is Allah’s; then if they give over, there shall be no enmity save for evildoers.” (Qur’an 2:191-193)

“They wish that you should disbelieve as they disbelieve, and then you would be equal; therefore do not take friends from among them, until they emigrate in the way of Allah; then, if they turn their backs, seize them and kill them wherever you find them; do not take for yourselves any one of them as friend or helper.” (Qur’an 4:89)

“This is the recompense of those who fight against Allah and His Messenger, and hasten about the earth to do corruption there: they shall be killed, or crucified, or their hands and feet shall be struck off on opposite sides; or they shall be exiled from the land. That is a degradation for them in this world; and in the world to come awaits them a mighty chastisement.” (Qur’an 5:33)

“Fight them, till there is no persecution and religion is all for Allah; then if they give over, surely Allah sees the things they do.” (Qur’an 8:39)

“Then, when the sacred months are over, kill the idolaters wherever you find them, and take them, and confine them, and lie in wait for them at every place of ambush. But if they repent, and perform the prayer, and pay the alms, then let them go their way; Allah is All-forgiving, All-compassionate.” (Qur’an 9:5)

“Fight those who believe not in Allah and the Last Day and do not forbid what Allah and His Messenger have forbidden, and do not practice the religion of truth, even if they are of the People of the Book — until they pay the jizya with willing submission and feel themselves subdued.” (Qur’an 9:29)

“Allah has bought from the believers their selves and their possessions against the gift of Paradise; they fight in the way of Allah; they kill, and are killed; that is a promise binding upon Allah in the Torah, and the Gospel, and the Koran; and who fulfils his covenant truer than Allah? So rejoice in the bargain you have made with Him; that is the mighty triumph.” (Qur’an 9:111)

“O believers, fight the unbelievers who are near to you; and let them find in you a harshness; and know that Allah is with the godfearing.” (Qur’an 9:123)

“When you meet the unbelievers, strike their necks, then, when you have made wide slaughter among them, tie fast the bonds; then set them free, either by grace or ransom, till the war lays down its loads. So it shall be; and if Allah had willed, He would have avenged Himself upon them; but that He may try some of you by means of others. And those who are slain in the way of Allah, He will not send their works astray.” (Qur’an 47:4) 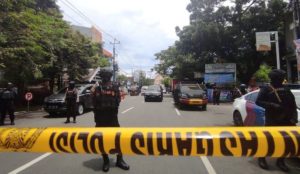 A suspected suicide bomb attack outside a Catholic church in the Indonesian city of Makassar has left at least 14 people wounded, police say.

Police said an explosion happened as two people tried to enter the church on Palm Sunday, the first day of Easter.

A destroyed motorbike and body parts were found at the scene and police said the two attackers had died.

Militant Islamists have attacked churches in the past but no group has yet said it was behind the bombing.

“Whatever the motive is, this attack cannot be justified by any religion because it only does harm to other people,” he said.

What do we know about the attack?
The explosion happened at about 10:30 local time (03:30 GMT) at the end of a service for Palm Sunday.

“There were two people riding on a motorbike when the explosion happened at the main gate of the church – the perpetrators were trying to enter the compound,” National Police spokesman Argo Yuwono said.

A priest at the church, Father Wilhemus Tulak, told Metro TV that security guards had tackled one suspected bomber.

The attacker, he said, arrived by motorbike and tried to get into the church.

Police said at least 14 people were injured, including the church officials who stopped the attackers from entering the grounds of the cathedral.

The blast happened by the church’s side entrance. Footage from security cameras showed fire, smoke and debris being blown into the middle of the road.

Makassar Mayor Danny Pomanto said that if the explosion had happened at the main entrance, it could have led to far more casualties.

Gomar Gultom, head of the Indonesian Council of Churches, said the attack on people celebrating Palm Sunday was “cruel”….