Islamic Coup: More Than 90 Muslims, Mostly Democrat, Running For Political Office In The US

As America continues to run from the law of God and the Gospel of Jesus Christ, she continues in the very curses that God promised a rebellious people.  One of those is that foreigners would come in and rise above the citizens of the land.  That is happening in America today.  It’s now being reported that over 90 Muslims, most of whom are Democrats, are running for political office in America and the numbers grow with each passing year.

Apparently, the election of President Donald Trump is being pointed to as the reason more Muslims are seeking office. 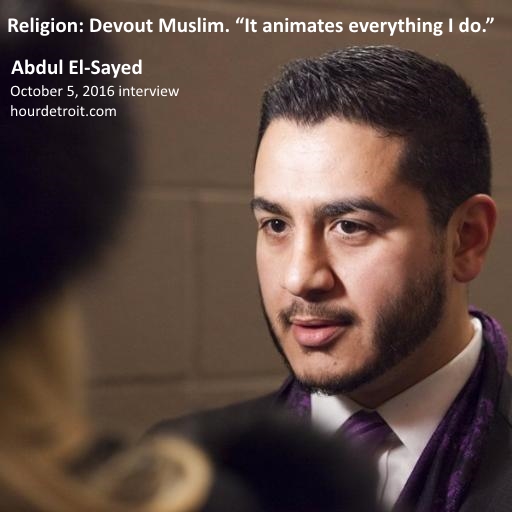 More than 90 American Muslims, nearly all of them Democrats, are running for public office across the country this year. Many are young and politically inexperienced, and most are long shots. But they represent a collective gamble: that voters are so disgusted by America’s least popular president on record that they’re willing to elect members of America’s least popular religious minority group.

Although their number seems small, the candidacies mark an unprecedented rise for the nation’s diverse Muslim community that typically has been underrepresented in American politics.

There are more than 3.3 million Muslims living in the United States, but Muslim Americans hold just two of the 535 seats in Congress. And the Muslim community’s voter participation pales in comparison to the general public’s.

Fayaz Nawabi, a Muslim candidate running for San Diego City Council, gathers his belongings before going to a debate at the Mira Mesa Public Library in San Diego on March 3. (Sandy Huffaker/For The Washington Post)

While Clinton’s campaign never garnered broad enthusiasm from Muslim communities, Trump’s campaign — which called for the monitoring of mosques and a ban on Muslims entering the United States — delivered a jolt on election night that some American Muslims likened to the Sept. 11, 2001, attacks.

While WaPo attempts to paint people like Fayaz Nawabi, a 31-year-old candidate for San Diego City Council, as someone who is just holding to American ideals, the fact that he is open about his anti-Christ religion (1 John 2:18; 2:22; 4:3; 2 John 1:7) demonstrates that he is the direct opposite of what America was founded upon, the Bible and the Christ it presents, who is none other than God in the flesh (John 1:1, 14, 17-18).

Creeping Sharia, in reporting on this explosion of Muslims candidates running for office, writes:

9/11 was just the first notable battle in the Islamic takeover of the United States. As we noted a few weeks ago, the Ongoing Islamization of America – Muslims Going Hyper Political. It’s much worse than expected.

Without a dramatic shift, a halt to Muslim immigration, and a return of tens of thousands of so-called Muslim refugees – the demographics in America will be forever changed. They will never be reversed and it will only be a matter of time until what has happened in dozens of countries in the world will happen here. The long game does not bode well for non-Muslims.

Replace Europe with America in the cartoon below. 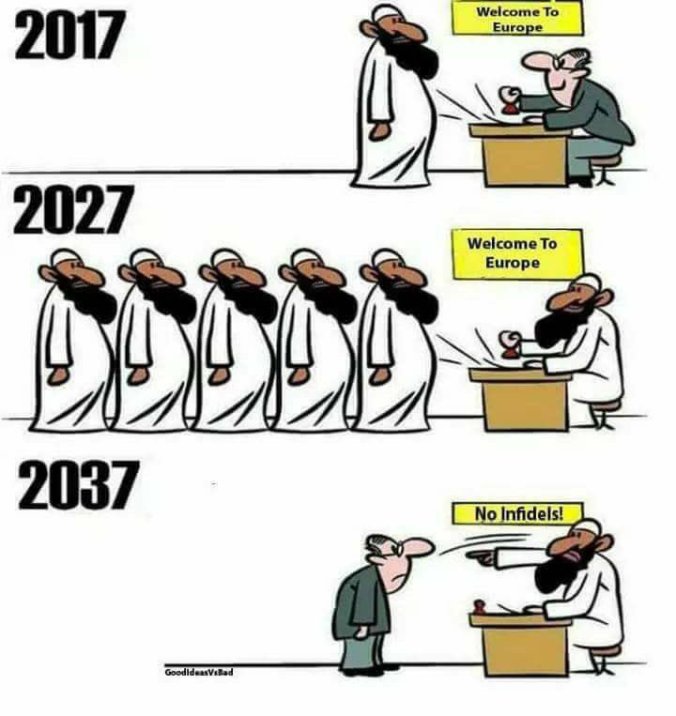 Indeed.  We’ve already seen in the previous election season how Muslims who have won responded to the community.

Hamtramck, Michigan is the first US city in history to have a majority of Muslims on the city council.  In 2015, it was reported:

Well, it didn’t take long for the Islamic supremacist aggression and hostility to surface — did it? It never does. Always conflict and strife.

A cell phone video, taken moments after Muslims received the word that they took over the city council, has surfaced of one of the organizers of the Muslim city council effort saying, “Today we show the Polish and everybody else…” The town has a large but shrinking Polish community.

How ugly. How fast.

They won — are they incapable of being gracious? Don’t answer that. The message is clear: non-Muslims move or else.

Yet when the Muslims gained control of the city council last week, a local reporter, Will Jones, summarized how immigrants had “dramatically changed the face and culture of this community,” and said exultantly, “Now, the Hamtramck City Council is going to reflect that diversity.”

It came after Hamtramck voters elected America’s first Muslim majority city council in a town where the Polish community held the power for decades. Cathie Lisinki-Gordon, a former councilmember, was one of Tuesday’s losers and was surprised at the comment. “I’m shocked that he said that. I’m a very good friend of his,” she said. “I cannot believe that he would ever profile any select group. Especially when his community has felt ostracized and profiled for many years.” The statement was immediately rebuffed by many present at the Muslim candidates’ victory lab Saad Almasmari, the top vote getter, was one of them…

The more they take over incrementally, the more they will begin to impose the Sharia.  All it takes is for Americans to repent and put an end to this and God will heal our land. The question is, who among us is not interested in being politically correct in the face of the judgment God is bringing upon us for our sins?  And He is doing it.

“The Lord will open to you his good treasury, the heavens, to give the rain to your land in its season and to bless all the work of your hands. And you shall lend to many nations, but you shall not borrow.  And the LORD will make you the head and not the tail, and you shall only go up and not down, if you obey the commandments of the LORD your God, which I command you today, being careful to do them,… But if you will not obey the voice of the Lord your God or be careful to do all his commandments and his statutes that I command you today, then all these curses shall come upon you and overtake you…. The sojourner who is among you shall rise higher and higher above you, and you shall come down lower and lower. He shall lend to you, and you shall not lend to him. He shall be the head, and you shall be the tail.” -Deuteronomy 28:12-13; 15; 43-44

Don't forget to like SonsOfLibertyMedia.com on Facebook, Google+, & Twitter.
The opinions expressed in each article are the opinions of the author alone and do not necessarily reflect those of SonsOfLibertyMedia.com.
Previous Post:
Bombshell In Trial Of FBI Sniper Who Shot At LaVoy Finicum: 8 Shots Were Fired – Only 2 Shell Casings Recovered
Next Post:
What? Why Did Donald Trump Offer Barack Obama $50 Million?