Minnesota Rep. Ilhan Omar was very vocal against police brutality in Nigeria in 2020.  However, when called upon to join in protests against people made slaves under Islamic jihad in the same country she was nowhere to be found and gave no voice to those oppressed by Islamists.

On Thursday, the Ad Hoc Committee to Free the Slaves of Nigeria protested for an end to modern-day slavery in Nigeria and called on Rep. Ilhan Omar to join them.  They even posted a billboard overlooking a downtown intersection near Target Field off freeway 94 in Minneapolis, Minnesota. 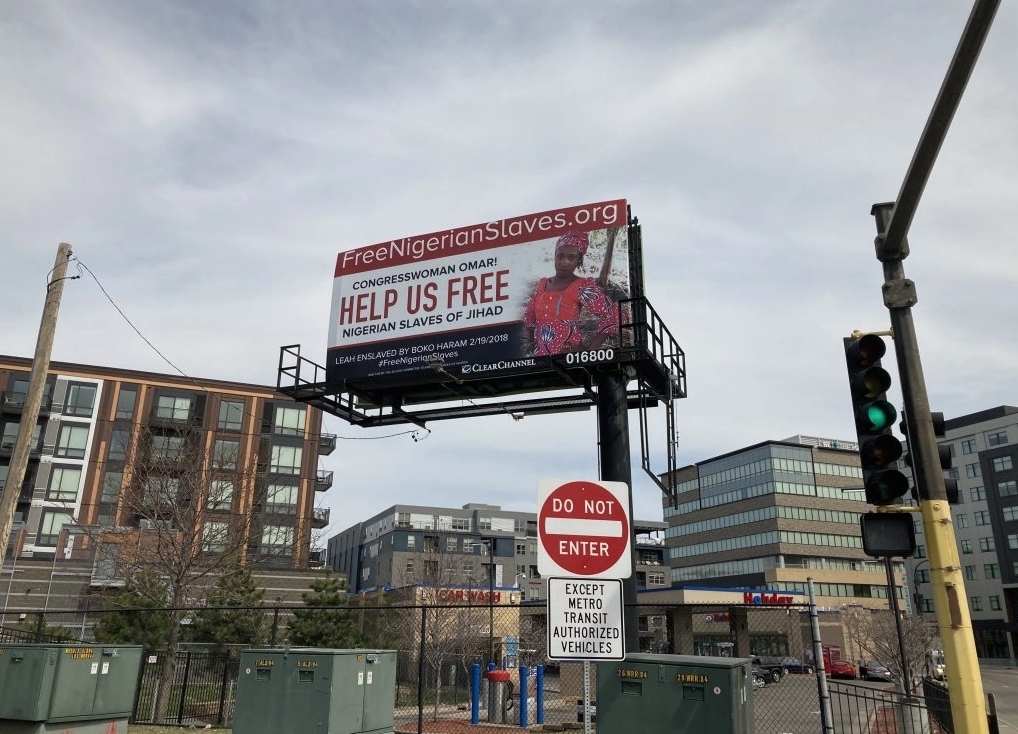 From the group’s press release:

Washington, D.C. — On Thursday, April 8, at noon, the Ad Hoc Committee to Free the Slaves of Nigeria (CFSN) will protest the enslavement of Nigerians by jihadists. Protesters will gather at a billboard announcing their cause (at 508 North 6th Avenue, Minneapolis) and then at 2:30 will march to the offices of U.S. Congresswoman Ilhan Omar (404 3rd Avenue North) to request her help in galvanizing support to emancipate the slaves. The CFSN is an organization of Nigerian and Nigerian American human rights activists and their respective groups.

CFSN member Stephen Enada, president of the International Committee on Nigeria (ICON), said today, “The situation is dire. We can no longer sit in silence as our brothers and sisters in Nigeria are being captured and enslaved.”

Since 2001, Boko Haram terrorists, Fulani militants, and other extremist groups tied to the Islamic State and al-Qaeda, have raided Nigerian villages, killed tens of thousands, and enslaved an untold number of women and children.

In 2021 alone, hundreds of schoolchildren in Nigeria have been kidnapped. Parents fear sending their children to school. School-aged children are terrorized. Most of the individuals captured by Boko Haram jihadists are young women and girls taken by force and trafficked as slave concubines. They endure horrendous abuse and mistreatment. An example of one of these victims is displayed on the billboard: she is 17-year-old Leah Sharibu, kidnapped from her school in Dapchi, Nigeria, in 2018.

“Nigerian women and girls like Leah Sharibu who are enslaved by Boko Haram terrorists for standing courageously for their religious beliefs should never be abandoned or forgotten in captivity,” said CFSN member Dr. Gloria Puldu, president of the LEAH Foundation, an organization that represents the Sharibu family and lobbies for Leah’s release.

“A day must come when we stand up for a secure and peaceful tomorrow — today is that day,” said CFSN member Pastor Ayo Adedoyin of the International Organization for Peace-Building and Social Justice (U.K.).

Nigeria is ranked third in the 2020 Global Terrorism Index (GTI) of countries most impacted by terrorism. Since 2014, Fulani militants — a small, extremist portion of the Fulani people — have accelerated the conflict with Nigerian Christians at an alarming rate. It is reported that Fulani militants are responsible for 7,400 deaths since 2015, targeting and attacking whole communities, schools, and households. Boko Haram has formally pledged allegiance to the Islamic State, and, since 2009, it is believed responsible for murdering approximately 30,000 innocent people and displacing perhaps two million.

“As a member of the U.S. House of Representatives and an individual who is outspoken on the importance of standing against the mistreatment of blacks, Representative Omar holds a unique position to promote real change regarding modern-day slavery in Nigeria,” Enada said. “We believe her position as Vice-Chair of the U.S. Foreign Affairs Subcommittee on Africa and Human Rights gives her an audience of real change makers which we at ICON cannot reach on our own. With her help, we could one day see victims of enslavement returned to their desperate families.”

The website, www.FreeNigerianSlaves.org, has been created in order to educate the public. It provides an opportunity for people to sign a petition encouraging Representative Omar to use her voice to help those silently suffering in Nigeria.

To read the full petition and to view the signees go to www.FreeNigerianSlaves.org.

There was no word that Omar showed up, and calls and emails to Omar’s office went unreturned to us.

My guess is because these are her fellow jihadis, she is not going to oppose them because she believes in what they are doing according to the Koran and Hadiths.  Remember, this is the same criminal, fraudulent, adulterous woman who supported making sure insurance companies paid the families of Islamic jihadis.

Don't forget to like SonsOfLibertyMedia.com on Facebook and Twitter.
The opinions expressed in each article are the opinions of the author alone and do not necessarily reflect those of SonsOfLibertyMedia.com.
Previous Post:
Millions Of Law-Abiding Gun Owners May Soon Be Criminals Thanks To Biden’s War On The Constitution
Next Post:
Biden’s Infrastructure Proposal Including Things That Are Not Federal Infrastructure