Recently, patriots in Kentucky took a stand against tyranny as part of their Patriot Day Second Amendment Rally.  Unfortunately, it didn’t get much coverage so, we’re going to highlight the people’s demand for the resignation of Governor Andy Beshear.

In the Support The 2nd Amendment group on Facebook, Ben Kennedy wrote, “One of the most powerful things we did at our rally was to issue our DECLARATION OF THE FREE CITIZENS OF KENTUCKY DEMANDING THE RESIGNATION OF GOVERNOR ANDY BESHEAR! I knew the leftist media would never report the real reason that we marched to the Governor’s Mansion which was to try to present it to Andy or one or his representatives in person but of course, no one answered the door which is why I taped it up on the door for everyone to see.”

“I am a little disappointed that so far not 1 of our elected officials here in KY has joined us in demanding Andy’s resignation because anyone who reads our Declaration can see that all that we have accused him of doing in violating our Constitutional rights is 100% true and Andy should be force to resign!” he added.  “Everyone start calling your representatives in the KY Legislature and ask them why they are not calling for Andy’s resignation because even the FOP in Louisville has demanded the resignation of Mayor Fischer and what Andy has done to Kentucky is so much worse. Of course, it takes some real guts like we had in issuing our Declaration to make such a demand and apparently NONE of our state’s elected reps have any!”

Kennedy then urged  supporters to send their representatives a copy of the declaration and asked them “when are they going to have the guts to force Andy to resign!” 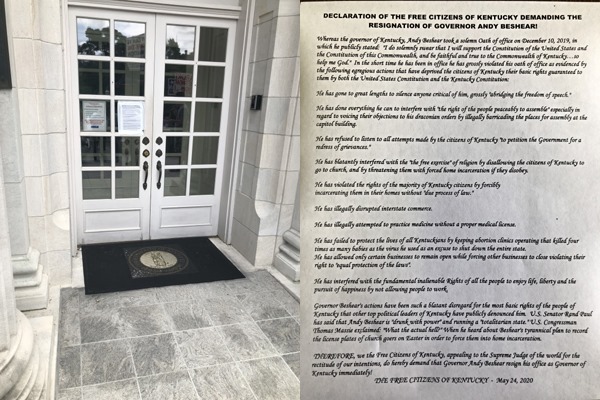 Here’s a copy of the text of the declaration.

DECLARATION OF THE FREE CITIZENS OF KENTUCKY DEMANDING THE RESIGNATION OF GOVERNOR ANDY BESHEAR!
Whereas the governor of Kentucky, Andy Beshear took a solemn Oath of office on December 10, 2019, in which he publicly stated: “I do solemnly swear that I will support the Constitution of the United States and the Constitution of this Commonwealth, and be faithful and true to the Commonwealth of Kentucky…so help me God.” In the short time he has been in office he has grossly violated his oath of office as evidenced by the following egregious actions that have deprived the citizens of Kentucky their basic rights guaranteed to them by both the United States Constitution and the Kentucky Constitution:
He has gone to great lengths to silence anyone critical of him, grossly “abridging the freedom of speech.”
He has done everything he can to interfere with “the right of the people peaceably to assemble” especially in regard to voicing their objections to his draconian orders by illegally barricading the places for assembly at the capitol building.
He has refused to listen to all attempts made by the citizens of Kentucky “to petition the Government for a redress of grievances.”
He has blatantly interfered with the “the free exercise” of religion by not allowing the citizens of Kentucky to go to church, and by threatening them with forced home incarceration if they disobey.
He has violated the rights of the majority of Kentuckycitizens by forcibly incarcerating them in their homes without “due process of law.”
He has illegally disrupted interstate commerce.
He has illegally attempted to practice medicine without a proper medical license.
He has failed to protect the lives of all Kentuckians by keeping abortion clinics operating that killed four times as many babies as the virus he used as an excuse to shut down the entire state.
He has allowed only certain businesses to remain open while forcing other businesses to close violating their right to “equal protection of the laws”.
He has interfered with the fundamental inalienable Rights of all the people to enjoy life, liberty and the pursuit of happiness by not allowing people to work.
Governor Beshear’s actions have been such a blatant disregard for the most basic rights of the people of Kentucky that other top political leaders of Kentucky have publicly denounced him. U.S. Senator Rand Paul has said that Andy Beshear is “drunk with power” and running a “totalitarian state.” U.S. Congressman Thomas Massie exclaimed: “What the actual hell?” When he heard about Beshear’s tyrannical plan to record the license plates of church goers on Easter in order to force them into home incarceration.
THEREFORE, we the Free Citizens of Kentucky, appealing to the Supreme Judge of the world for the rectitude of our intentions, do hereby demand that Governor Andy Beshear resign his office as Governor of Kentucky immediately!
THE FREE CITIZENS OF KENTUCKY – May 24, 2020
Facebook Twitter Pinterest

Don't forget to like SonsOfLibertyMedia.com on Facebook and Twitter.
The opinions expressed in each article are the opinions of the author alone and do not necessarily reflect those of SonsOfLibertyMedia.com.
Previous Post:
Hero Nurse Erin Marie Olszewski: Saving Lives & Saving Our Country Depends On All Of Us To Win this Battle
Next Post:
Protesters Lead Un-Masked Protest Against Texas Governor Greg Abbott’s Mask Tyranny