The Las Vegas Shooting Massacre: Is There an Active Cover-up in Progress?

What really happened at the Las Vegas massacre? I’m not one given to conspiracy theories but after researching this – there is a lot of conflicting information out there. One thing seems certain to me at this point – there is some kind of cover-up going on.

Some hard questions need to be asked here and definitive answers discovered. One thing this writer can tell you – the real answers will not be forthcoming from the main stream media who spin every story to suit their own agenda.

#1 Why was the timeline of events changed? Note the arrival time of Jesus Campos on the 32nd floor (Mandalay Bay security guard) differs by 15 minutes between the two timelines. In the first timeline Campos arrives on scene 1 minute before Paddock fires his last shots. In the new timeline, Campos arrives on scene 6 minutes before Paddock fires any shots into the crowd below. How could this big of a mistake have been made?

UPDATE: There is 3rd change to the timeline according to The New York Times – LVMPD Sheriff Joseph Lombardo is now saying Campos was shot by Paddock around 10:05pm. 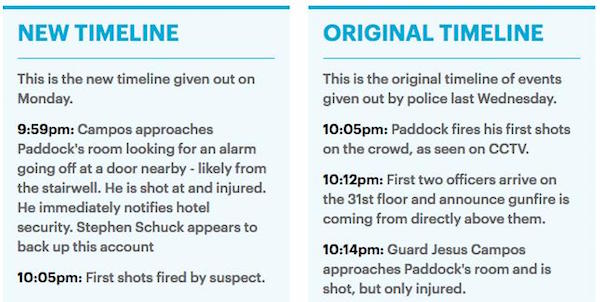 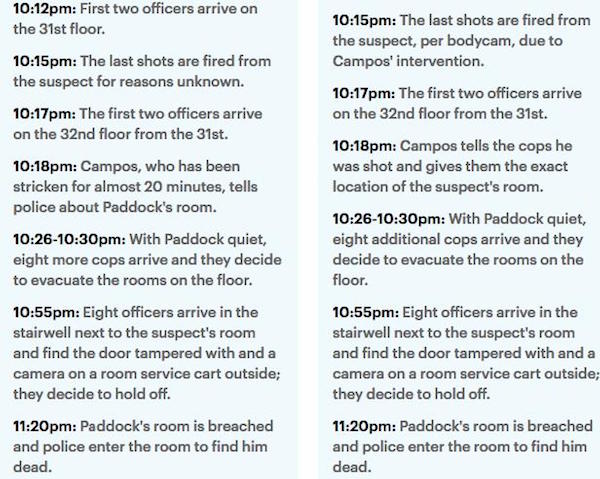 #2 Why Did Jesus Campos abruptly disappear on Thursday hours before he was scheduled to do an interview for the Sean Hannity show and then interviews for NBC, ABC, CBS, and CNN?

David Hickey the local union president was in a meeting with MGM officials while Campos was in another room with an additional union member as well as a security guard hired by MGM to protect Campos. About an hour later, Hickey came out of the meeting to discover Campos along with the two others were gone. The whereabouts of Campos are still unknown.

#3 Why did Jesus Campos disappear hours after MGM Resorts International disputed the validity of the Las Vegas shooting massacre timeline?

Why is no one saying where Campos is, and why is Campos being guarded – not to mention his home is being guarded around the clock by a private security company?

#4 MGM management according to Intellihub is disputing the LVMPD new timeline saying they believe Campos radioed in “shots fired” during the shooting or within 40 seconds prior to Paddock’s 1st shots fired. Why the difference?

#5 Investigative reporter Laura Loomer visited Campos home a second time and was told by a female member of Campos family that: ‘I can’t talk about this, I was told not to talk about this.’

Who told this family member not to talk and why? If there is nothing to see here, then why was an apparent gag order issued and by whom?

#6 Who is the woman who warned concertgoers about 45 minutes before the shooting started that they were all going to die?

#7 In crime scene photos Paddock is seen to be wearing gloves – why? If he was on a suicide mission, then his fingerprints would not matter now would they? Powder burns, not likely.

#8 Also in crime scene photos a .223 caliber rifle shell casing is on top of the blood pool by Paddock’s head. How could that be if he shot himself as authorities claim?

#9 Kymberley Suchomel was at the Route 91 Harvest Music Festival and survived the gruesome ordeal – unscathed physically. Suchomel also posted to Facebook on what happened to her during the shooting. Days later – she is dead. How and why did she die? According to Suchomel’s grandmother she had epilepsy and had recently suffered three focal seizures.

#10 Kymberley Suchomel had posted a very graphic account of her and her friends escape from the brutal massacre at Las Vegas on Facebook. In her account Suchomel claimed there were multiple shooters involved – also saying she was sure they had been chased as they ran.

When I looked this morning (10/14/2017) Suchomel’s account had been scrubbed of most all information. Afternoon of the same day – the account no longer exists. Who did this and why was it done? A search of Facebook turns up no results other then news concerning Suchomel.

#11 The audio recordings do not match the official story of what happened – why? What are the police trying to hide if anything or the mainstream media trying to cover up?

#12 If this was a suicide mission by Paddock, (Which I do not for a moment believe) then why did he have a small arsenal of weapons and a chemical explosive (tannerite) in one of his other homes. Paddock also had ammonium nitrate, which is often used in bomb-making in his car.

There is also a two-minute gap between the last shots fired, and the arrival of the first police officers on the 32nd floor of the hotel – enough time for Paddock to have left the scene. Why didn’t he? Obviously, because he was shot, but I think my point is made here.

#13 There are many, many more unanswered questions on what happened and why it happened. Why are so many questions being ignored by the media? Why does the timeline keep changing? If Paddock killed himself, why does the evidence suggest otherwise? Paddock fits no profile for this act, none of his friends or family had a clue this was coming, why? There is a great article on this over at The Organic Prepper concerning this, I recommend reading it.

While this writer does not pretend to have the answers, there are too many unanswered questions about the Las Vegas shooting to take what we have been told happened at face value.

Don't forget to like SonsOfLibertyMedia.com on Facebook, Google+, & Twitter.
The opinions expressed in each article are the opinions of the author alone and do not necessarily reflect those of SonsOfLibertyMedia.com.
Previous Post:
Judges Commit Impeachable Offense – Rule Against Cross
Next Post:
Why Are President Donald Trump’s Appointees Protecting The Clintons?