Leading The People To Empty Promises: ‘Q-Anon’ Just Another Psyop To Keep You Distracted

While preaching in Michigan this last week, I had an individual ask me my thoughts on ‘Q-Anon’ (Luke 19:10).

Although ‘Q-Anon’ has been forecasting promises un-fulfilled (smoke and mirrors) for years I was a little taken back that there were still them that were hanging on to this obvious pysop that is taken place in America today, then again, this does explain why these people are hopeless and confused (Psalm 18:21; Daniel 9:7).

This only works with a people when the people put their trust in men and speculation as desired outcome rather than having their faith in Christ (Jeremiah 11:13; 1 Corinthians 15:58). 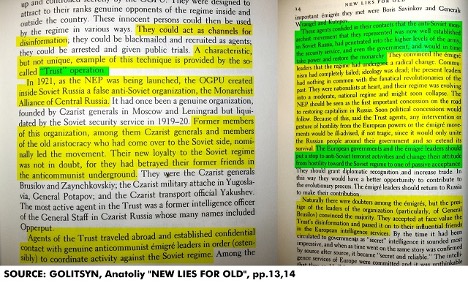 “Operation Trust” was a Bolshevik counterintelligence operation run from 1921 to 1926 aimed at neutralizing opposition by creating the false impression that a powerful group of military leaders had organized to stop the communists’ takeover.

Conclusion: ‘Q-Anon’ is responsible for more than nothing than leading the sheeple to un-fulfilled predictions, and that for years (Jeremiah 5:21).

‘Q-Anon’ is nothing more than an operation of deceivers to lead people into chasing shadows and, of course, that is exactly their end aim, to bring the people that are following them to nothing (Jeremiah 6:16).  To date, that is has been exactly the result.

This then only buys them more time to dismantle the country and undermine and weaken the people into compliance.  Yet, the problem is that they just do not realize that they are also destroying themselves (Luke 22:48).

Don't forget to like SonsOfLibertyMedia.com on Facebook and Twitter.
The opinions expressed in each article are the opinions of the author alone and do not necessarily reflect those of SonsOfLibertyMedia.com.
Previous Post:
The Vaccines Are Coming To Your Front Door, Literally!
Next Post:
Alert: They Are Going To Try To Ban Donald Trump From Running For President For The Rest Of His Life

Exclusive: Artur Pawlowski On Victory Over Canadian Nazis: We Are Lions, We Eat Hyenas For Breakfast (Video)
December 4th, 2021 Sons of Liberty Media