Lebanese Politician On Beirut Blast: ‘It’s Crystal Clear Hezballah Are In Charge Of The Port And Warehouse’

Iran, Hezbollah Use Mexican Drug Cartels to Infiltrate US April 3, 2020

Muslim joins Hizballah, then migrates to US, then goes to Turkey for explosives and weapons training October 8, 2019 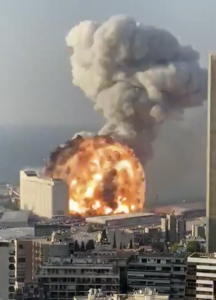 “‘It’s crystal clear Hezbollah are in charge of the port and warehouse’: Leading Lebanese politician blames terrorist group and ‘corrupt’ government for catastrophic explosion – as aerial images reveal blast even sank a cruise ship,” by Chris Pleasance, Nigel Rosser and Raven Saunt, Mailonline, August 6, 2020 (thanks to the Geller Report):

A leading Lebanese opposition figure has blamed Hezbollah, along with the country’s ‘corrupt’ government, for the devastating explosion in Beirut which capsized a cruise ship and has so far claimed 137 lives.

Bahaa Hariri, whose father, Prime Minister Rafiq, was assassinated in 2005, said last night everyone in the city knew Hezbollah controlled Beirut’s port and airport and it was inconceivable that the authorities did not know the deadly ammonium nitrate was stored in a warehouse there.

Speaking for the first time Mr Hariri, 54, said: ‘The question we have to ask is how come for six years this combustible material was allowed to remain in the middle of this city of two million people?’

‘It is crystal clear Hezbollah are in charge of the Port and the Warehouse where the ammonium nitrate was stored.

‘Nothing goes in and out of the Port or the Airport does so with them knowing. Nothing.

‘Their decision to put it there in the middle of a city of two million people was an utter disaster. And now we have a destroyed city centre.’

The explosion on Tuesday night, which was the size of a small nuclear bomb, has left at least 137 people dead and a further 5,000 wounded.

There are now thought to be 300,000 left homeless and wide-spread damage estimated at up to $5billion – including a 120-metre long cruise ship which capsized as a result of the blast.

A military judge leading the investigation into Tuesday’s blast said 16 employees of Beirut’s port, where the explosion took place, had been detained. He said 18 had been questioned, including port and customs officials, according to the state news agency.

But while investigators focus on port officials, many Lebanese put the blame squarely on the political elite and the corruption and mismanagement that even before the disaster had pushed the country to the brink of economic collapse.

Cypriot police say they have questioned a Russian man over alleged links to a ship and its cargo of ammonium nitrate said to have caused the devastating explosion.

The explosion has threatened to reignite anti-government protests in Lebanon that have been ongoing since last year amid allegations of entrenched incompetence and corruption.

Emmanuel Macron offered France’s support for the Lebanese people as he visited Beirut on Thursday, but warned the country would ‘continue to sink’ unless its leaders carry out reforms.

The comments from Mr Hariri today echoed warnings given to the UN by the Israeli ambassador Danny Danon last year. At the time, the ambassador said: ‘Israel found that Iran and the Quds Force have begun to advance the exploitation of civilian maritime channels, and specifically the Port of Beirut.’

Speaking to the 15-member Security Council, he added: ‘The Port of Beirut is now the Port of Hezbollah.’…

Don't forget to like SonsOfLibertyMedia.com on Facebook and Twitter.
The opinions expressed in each article are the opinions of the author alone and do not necessarily reflect those of SonsOfLibertyMedia.com.
Previous Post:
Jihad-Rep Rashida Tlaib Found Guilty Of Misusing Campaign Funds – Doesn’t Even Get A Slap On The Wrist
Next Post:
Economic Depression Of 2020: Endless Nightmare For Millions Of Americans