United We Stand: Rally for Colin Kaepernick, August 23, 2017, was hosted by Shaun King — “Journalist,” “Justice” League NYC, The People’s Consortium for “Human and Civil Rights,” Inc. from 5 PM to 8 PM outside the NFL headquarters in NYC. (In other words, every soc/commie/prog/fascist organization was there to hate on a “racist” America.) 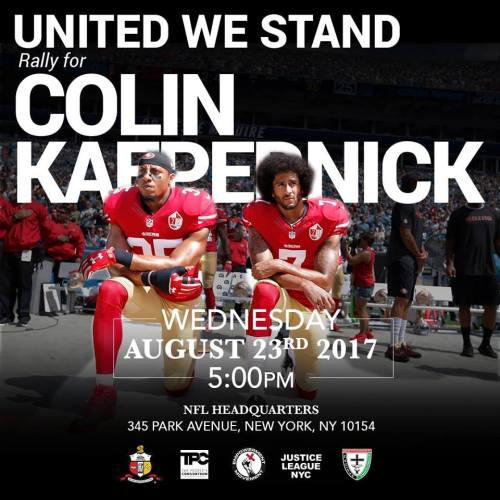 Symone Sanders, former national press secretary for Democratic presidential candidate Bernie Sanders, was introduced by her co-emcee Mark Thompson. He said, “She is known for pushing back against those devils on CNN.” WHO is COLIN K and Why are we here?

Colin Kaepernick, a former quarterback for the San Francisco 49ers, caused conflict last season by kneeling during the national anthem before games to protest police brutality and racial oppression. He inspired several other players to follow suit or make similar gestures, leading to debate about whether athletes should publicly engage in political discourse — and how actively. Kaepernick is a free agent without a team. And while he is not at the top of his game, as he was when he led the 49ers to the Super Bowl four years ago, many analysts believe teams are refusing to sign him because of his political nature, not his ability. Lift Every Voice and Sing by James Weldon Johnson

Lift every voice and sing
Till earth and heaven ring,
Ring with the harmonies of Liberty;
Let our rejoicing rise
High as the listening skies,
Let it resound loud … [tape begins here] … as the rolling sea.
Sing a song full of the faith that the dark past has taught us, Sing a song full of the hope that the present has brought us,
Facing the rising sun of our new day begun
Let us march on till victory is won.] END

“Lift Every Voice and Sing” was first written as a poem. Created by James Weldon Johnson, it was performed for the first time by 500 school children in celebration of President Lincoln’s Birthday on February 12, 1900 in Jacksonville, FL. … adopted by the National Association for the Advancement of Colored People (NAACP) as its official song.

“…. As Kaepernick’s protest drew criticism, so did the rally in support of him. A small group of protesters stood across Park Ave., some waved a Thin Blue Line flag meant to honor living and fallen law enforcement officers while a man held a sign with the words ‘COLIN THE COMMIE.’” “They are alleging that there is racism involved in Kaepernick not signing in the N.F.L., but he’s a free agent to sign or not sign,” said Karen Braun, who was among the JDL counter-protesters. “Was race the intent? No one can prove that.” [WHAS11-ABC]

VIDEO of the racist mob surrounding and threatening the JDL,  plus excerpt of Linda Sarsour’s racist screed at the Colin K protest.

Linda Sarsour: “We will not be silenced by blue lives matter—by white supremacists—by neo Nazis—by right wing Zionists. Expect us anytime there is a fight for justice or a fight against injustice.” 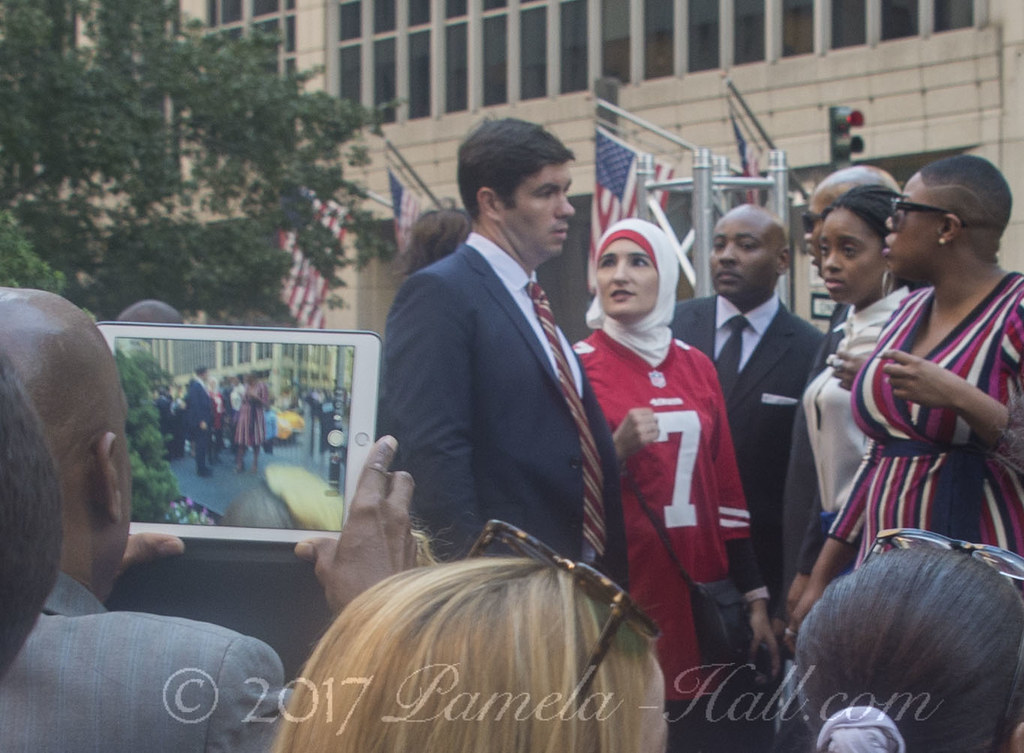 Links to reports of the protest: NY TIMES, WHAS11 ABC

“With you all the way Kaep and the other players who have the courage to throw a fist in the air, and or stand shoulder to shoulder with those players who protest.”

“What has the flag done for our people? It’s a symbol of country built on hate, genocide, oppression and racism. FUCK the flag.” “The funniest part about this rally is that the NFL league office doesn’t do the hiring, individual teams do. What a waste of time. The NFL itself has not punished any players for kneeling during the anthem. This is 100% a complete waste of time.”

“Why have a rally for that lazy traitorous coward I hope the. NFL gets completely shut down over this”

“In my eyes anyone who doesn’t honor our flag is a coward.”

“If he wants to take a knee in protest, he has absolutely has that right. What’s really at question here is does an employer have a right to fire him for it?” “NFL contracts are not guaranteed except for a pre-determined amount at the contract signing. Kap made $16M in 2016 and his poor performance plus the system that the new head coach wanted to implement did not warrant the 49ers to keep him for the same amount in 2017. Kap opted out because he knew the 49ers would cut him anyway. “A man may be paid great sums for his labors and YET his employer does not own his SOUL. If they choose to kneel and understand the consequences of kneeling (monetary fines or whatever sanctions imposed by NFL or team owners) then so be it! That is their right and each person must act according to their conscience. “

“We are protesting against NFL for violating Kapernick right to earn a living for his peaceful protest. Boycotting NFL is standing for Justice !!!!” “He didn’t protest a country where he lived a lavish life with a wonderful adopted family or the country that pays him millions to play a game. He disrepected not only this country but every person that has served and paid the ultimate sacrifice so he could live in a country that allows him to be an entitled punk with zero respect for this country. It’s all about attention and it’s sickening.” “What a complete joke. A spoiled child that threw a tantrum and was rejected by the country that made him rich. Maybe he’ll have to get a real job.”

(Where indicated, Pictures and videos property of Pamela Hall)

Don't forget to like SonsOfLibertyMedia.com on Facebook, Google+, & Twitter.
The opinions expressed in each article are the opinions of the author alone and do not necessarily reflect those of SonsOfLibertyMedia.com.
Previous Post:
Berkeley Mayor Jesse Arreguin: Antifa Should Be Designated A Gang
Next Post:
Trump: One Way or Another Mexico Will Pay for the Wall!