Vladimir Putin is threatening to use nukes again.  If Russia ultimately decides to conduct a surprise first strike, are you living near a location that is likely to get nuked?  Many people assume that the vast majority of the U.S. population would immediately die if a nuclear war erupts, but that isn’t true.  It has been estimated that only about 20 percent of the U.S. population would be wiped out right away, more would die later on from radiation exposure, but the vast majority of the population would actually die from starvation during the subsequent weeks and months due to the “nuclear winter” that would stretch on for at least a couple of years.  So if a nuclear war does happen, you will need enough food for yourself, your family and everyone that will be depending upon you for as long as you plan to stay alive.

In recent weeks, our politicians and the “experts” on the cable news channels have been assuring us over and over again that the risk of nuclear war is very low and that Vladimir Putin is bluffing when he threatens to use nuclear weapons.

Of course Putin wasn’t exactly bluffing about invading Ukraine, was he?

Considering his track record, I believe that we should take Putin’s threats deadly seriously, and he just publicly threatened to use nuclear weapons against anyone that interferes in the war in Ukraine…

‘If someone intends to interfere in what is going on from the outside they must know that constitutes an unacceptable strategic threat to Russia. They must know that our response to counter strikes will be lightning fast. Fast,’ he said.

‘We have all the weapons we need for this. No one else can brag about these weapons, and we won’t brag about them. But we will use them.’

Though Putin did not mention nuclear weapons directly, he was almost certainly referring to Russia’s new Sarmat 2 nuclear missile which was tested for the first time just days ago and that he boasted is unlike any other weapon in the world.

Obviously, that threat was directed at the United States, because we are intervening in the war in Ukraine more than anyone else.

As I have stated before, there are no winners in a nuclear war, but whichever side decides to strike first will have the best chance of surviving a nuclear war.

If the Russians ultimately determine that a direct military conflict with the United States is inevitable, they may decide that it is best to hit us before we can hit them.

When that day arrives, you will want to be as far away from prime strategic targets as you possibly can.

In addition, there are approximately 400 active nuclear missile silos that are spread across five states.  The following comes from the Washington Post…

About 400 of those missiles remain active and ready to launch at a few seconds notice in Montana, Wyoming, North Dakota, Colorado and Nebraska. They are located on bison preserves and Indian reservations. They sit across from a national forest, behind a rodeo grandstand, down the road from a one-room schoolhouse, and on dozens of private farms like the one belonging to the Butchers, who have lived for 60 years with a nuclear missile as their closest neighbor.

Secondly, you will want to be far away from any U.S. military bases, because they will be prime targets as well. 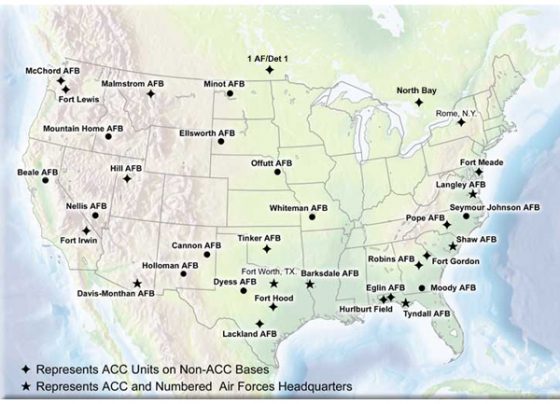 And this map of major U.S. Navy bases that was originally created by a user named “Orionist” also comes from Wikimedia Commons… 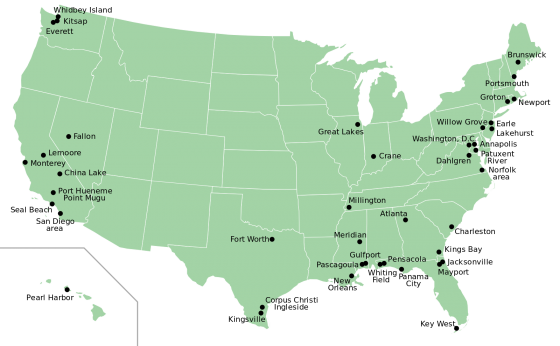 The list of U.S. Army bases in the United States is exceedingly long, but you can find the major ones right here.

In addition to military targets, the Russians would also likely strike major population centers, particularly those that have political or financial significance such as Washington D.C. and New York City.

Sadly, many of those that are not killed by the initial strike will wish that they were dead.

Because the nuclear winter that would follow would be absolutely horrifying.

A subsequent study, published in 2019, looked at a comparable but slightly lower 150 Tg atmospheric soot injection following an equivalent scale nuclear war. The devastation causes so much smoke that only 30-40 percent of sunlight reaches the Earth’s surface for the subsequent six months.

A massive drop in temperature follows, with the weather staying below freezing throughout the subsequent Northern Hemisphere summer. In Iowa, for example, the model shows temperatures staying below 0°C for 730 days straight. There is no growing season. This is a true nuclear winter.

Because very little could be grown during this time, the vast majority of the population would soon be dead as a result of famine…

By this time, most of Earth’s human population will be long dead. The world’s food production would crash by more than 90 percent, causing global famine that would kill billions by starvation. In most countries less than a quarter of the population survives by the end of year two in this scenario. Global fish stocks are decimated and the ozone layer collapses.

So can you understand why I am so passionate about avoiding a nuclear war?

A nuclear war would mean the end of civilization as we know it today, and so we must not allow one to happen.

But our leaders seem determined to drag us into one anyway.

Every escalation brings us one step closer to nuclear annihilation, and both sides continue to escalate matters with each passing day.

Don't forget to like SonsOfLibertyMedia.com on Facebook and Twitter.
The opinions expressed in each article are the opinions of the author alone and do not necessarily reflect those of SonsOfLibertyMedia.com.
Previous Post:
While All Eyes Are On Elon Musk, Bill Gates Is Buying Up America’s Farmland! (Video)
Next Post:
Despite Being Heavily Debunked, Police Department Releases Video Claiming Cop Nearly Died From “Exposure” To Fentanyl