Man Fired After Freaking Out Over Customer’s Trump Shirt

Earlier today, Ian Furgeson posted a video to Facebook, of a liberal store clerk freaking out about his Trump shirt.

In the video, the clerk refuses to serve Furgeson, who is a paying customer. The clerk screams like a maniac and even assaults Furgeson, all because Furgeson was wearing a Trump shirt.

After the video went viral and several Patriots complained about the clerk’s behavior, he was fired.

Xhale City in Tucker, GA posted a statement to Facebook that the clerk has been fired.

To our friends and customers,

Tonight, we had an employee act improperly toward a customer. Xhale City does not tolerate this kind of behavior from its employees. When we identified the employee at fault, we fired him immediately. We’ve also spoken to the customer and apologized. We value our clients and treat them with respect and dignity, regardless of their political views. 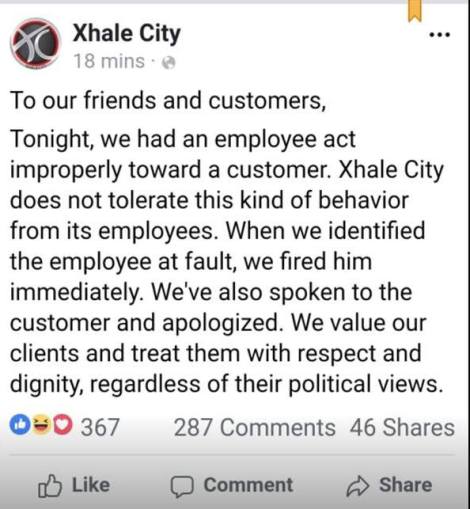 Don't forget to like SonsOfLibertyMedia.com on Facebook, Google+, & Twitter.
The opinions expressed in each article are the opinions of the author alone and do not necessarily reflect those of SonsOfLibertyMedia.com.
Previous Post:
Firearms-Related Accident Deaths Plunge More Than 40% Since 1999 – Media Fails To Report Truth
Next Post:
Scientist Creates Fake Fossils by Mimicking the Conditions of a Global Flood

For Whom Will I Vote?
October 22nd, 2020 Sons of Liberty Media
Send this to a friend