I have been reading people in emails writing things like “Beg President Trump to open the economy” and in a recent article at Lawn and Garden retailer, thousands of people petitioned the governor of Michigan to “allow the retail sale of garden and bedding plants.”  I have a question, since when do people in the sovereign states of the US “beg” their president for anything?  Since when do Americans beg a governor to stop doing what they have never been authorized to do and shut down the sale of plants?  I guess that’s now.

Despite receiving more than 18,300 messages from retailers, grower, farmers and Michigan residents asking Gov. Gretchen Whitmer to allow the retail sale of garden and bedding plants, the administration doubled-down and instead went the opposite direction, announcing an expansion and extension of restrictions in her new “Stay Home, Stay Safe” Executive Order (EO) 2020-42.

Under a new section of the EO, Whitmer imposed new restrictions Thursday, saying “large stores must also close areas of the store that are dedicated to carpeting, flooring, furniture, garden centers, plant nurseries, or paint.”

Saying there’s further effort needed to reduce crowds, the EO states, “Large stores must limit the number of people in the store at one time to no more than four customers for every 1,000 square feet of customer floor space; small stores must limit capacity to 25% of the total occupancy limits (including employees) under the fire codes.”

Whitmer’s EO continued restrictions for greenhouses and garden centers runs counter to similar EOs in Ohio, Illinois, New York and North Carolina, where the retail sale of plants has been deemed essential infrastructure.

Michigan Farm Bureau President Carl Bednarski expressed his disappointment that greenhouse and garden centers are unable to sell nursery stock, flowers and vegetable plants to consumers who are requesting it.

“We respect, without question, the toll COVID-19 virus has taken, and the need to protect public health,” Bednarski said. “But, we had hoped to learn that family-owned greenhouses and retail garden centers across state would be allowed to open and operate in a safe and secure manner, following strict social distancing guidelines and safety protocols recommended by the Center for Disease Control and Prevention (CDC).

“Unfortunately, that isn’t the case.”

If that were not enough, we are getting reports that some Wal-marts are even not allowing the sale of seeds.

For instance, in Vermont, KPRC reported on seeds being deemed “non-essential.”

According to a Walmart in the Green Mountain State, seeds (yes, seeds) have been deemed nonessential.

State officials in Vermont are ordering large retailers that sell critical items such as food and prescription drugs to stop the in-person sale of nonessential products.

Whenever possible, stores such as Walmart, Target and Costco must stop the sale of nonessential items and require online or telephone ordering, delivery and curbside pickup. 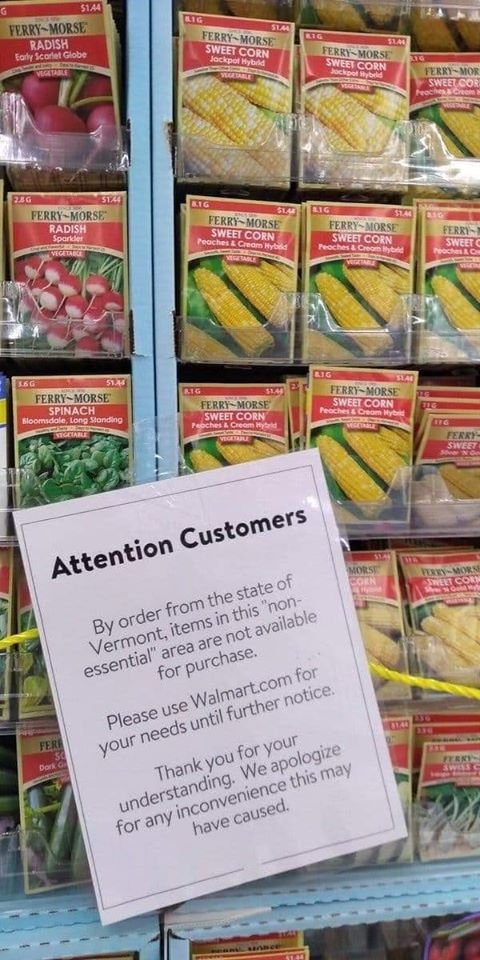 Since when are items that God first created “non-essential”?

Also, did you notice that they are allowed to “sell critical items such as food and prescription drugs.”  Not necessarily healthy food and who knows what the prescription drugs are doing to people, but you can get those, just not seeds to grow your own food.

Allowing government to usurp their roles and start telling us what is essential and non-essential is certainly a reminder of Nazi-Germany, don’t you think?

What are we going to do about it, people?

Don't forget to like SonsOfLibertyMedia.com on Facebook and Twitter.
The opinions expressed in each article are the opinions of the author alone and do not necessarily reflect those of SonsOfLibertyMedia.com.
Previous Post:
ICU Nurse Whistleblower: COVID-9 Is A Manufactured Crisis
Next Post:
Notre Dame Professor Hails Islamic Law – Asks International Law Judges To Consider “Referring To Parts Of Sharia”