“I am Muslim, Too” Dhimmis and Useful Idiots Return to Times Square

I am Muslim, too has returned shouting across Times Square: “We stand with American Muslims. 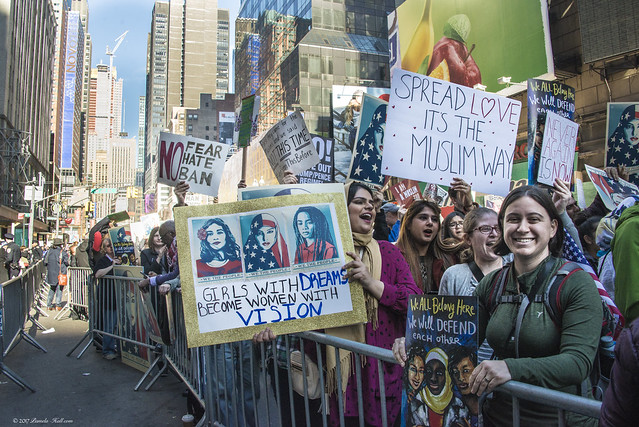 An I Heart Muslims event organized by the Foundation For Ethnic Understanding — a coalition of religious groups led by record label founder Russell Simmons, Rabbi Marc Schneider (and others)

The crowd was jammed, of course, with all the  UWS (upper west side) and Brooklyn Liberal Jews. Signs advertising their blind obedience with “I am a Jew. Today, I’m a Muslim too’ and  Muslims, of course, filled out the crowd..

Otherwise- the claim by comic, Dean Obeidallah (the Muslim MC) that we were surrounded by a SEA of Brown faces [stretching to 57th st] was GREATLY exaggerated. [See more in Flickr slideshow]

But, how else would Dean be able to lead with his fake-news punch-line LIE, that Trump’s Florida audience had been a sea of angry white faces filled with HATE. (obviously he didn’t see the black trump supporters in Melbourne, Florida. Sitting proudly behind trump, with signs held prominently towards the cameras.

BTW- co hosting with Obeidallah was lesbian, Jewish comic, Judy Gold. Her level of ignorance re Islam and its deathly intolerance for homosexuals obviously runs DEEP. Nope. the truth is always inconvenient. 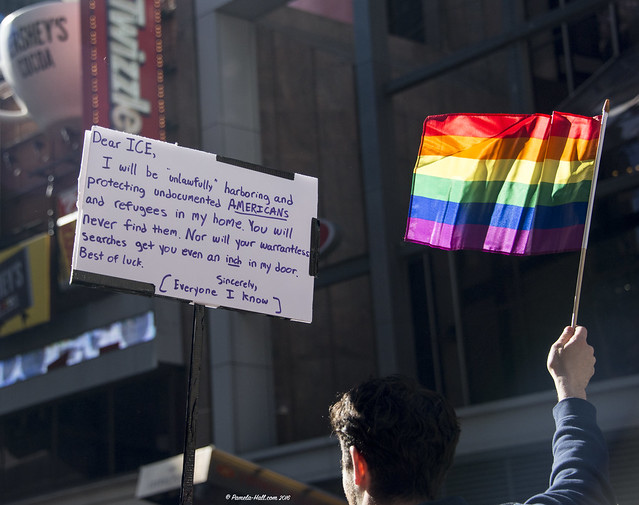 SO – onward  and upward with I am a MUSLIM, Too – Part Two. Starting things out was the comic co-hosts who screamed us into auditory hell, followed by that that great humanitarian, Def jams’ own Russell Simmons.

Simmons gave a speech to be expected,  ‘We are here, unified, because of Donald Trump, so we won’t speak too harshly of him tonight – today. We want to thank him for bringing us together. Middle America’ has been misled. The seeds of hate that were small, and maybe just ignorance, cannot be watered. That hate cannot grow’. Anti-Trump, Pro- Muslim. Yeah, that’s the ticket. 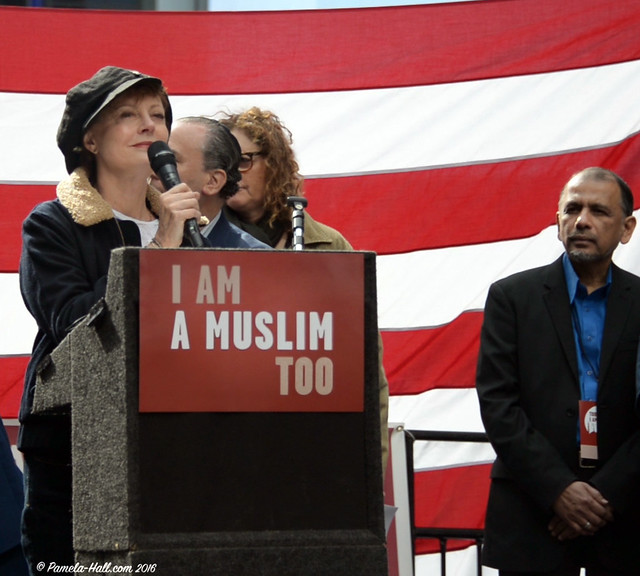 Susan Sarandon. The token STAR of the event, gave a DEEP-voiced speech (my god- what happened to her voice) Pro-forma leftist blather as she railed against Trump’s America destroying the constitution and ending with ‘We will fight hatred with love’ and OF COURSE, I am a MUSLIM, too. 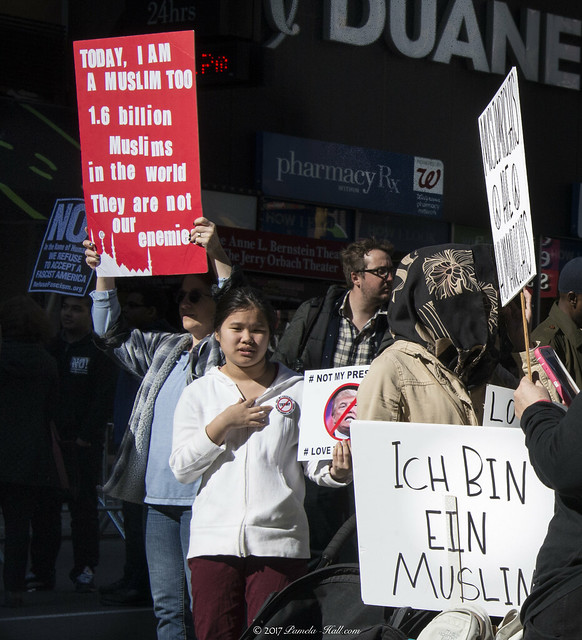 Ashamed of being Americans in what they claim to be an INTOLERANT America. 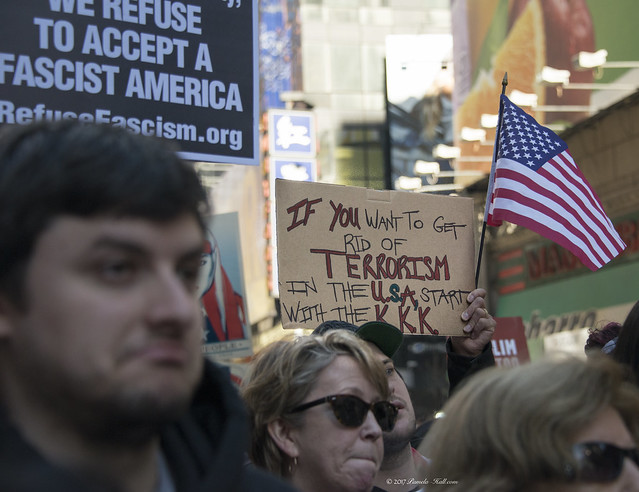 Local politicians and civil rights advocates, too. Parading their ignorance of Islam’s INTOLERANT history towards Judaism and Christianity, even NOW in the 21st century. No matter what the historically intolerant facts reveal about Islam, they shouted – each one of them – I AM A MUSLIM, TOO. 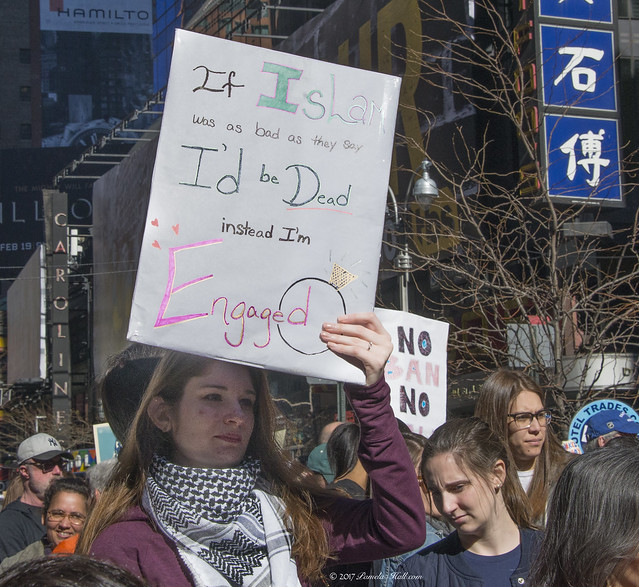 So, as the pathetic display of naive inclusiveness and good will continued for the cameras, we heard the required Muslim prayers; allahu akbars and takbirs from the stage . (even got the extra treat of some prayers at the side of the stage) 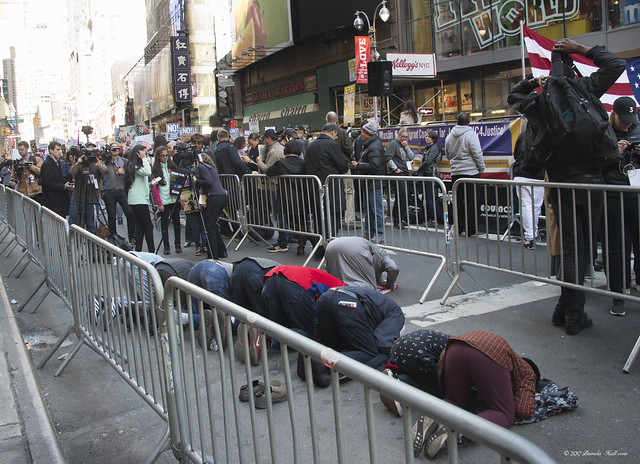 Linda Sarsour, Brooklyn-born Palestinian-American activist,  “I am unapologetically Muslim, all day, every day,” she told the cheering crowd. “I am not afraid because fear is a choice; it is not a fact. So today I ask you, in the true grit and spirit of a New Yorker, that you choose courage in the face of fear.”

Sarsour was also touted as one of the proud organizers of the DC Women’s march . 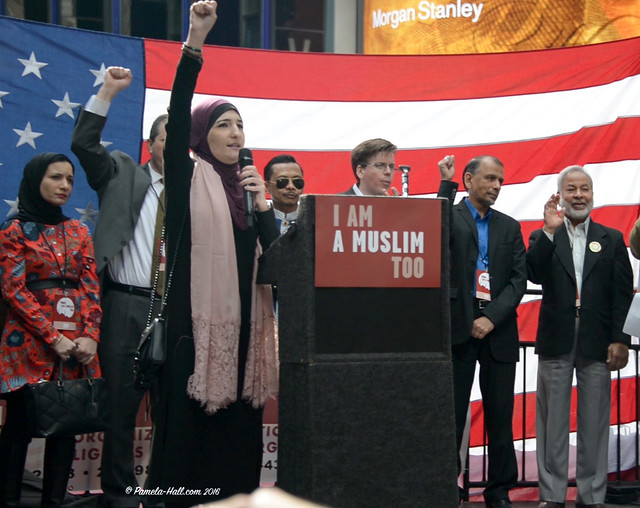 Fist bumping and ONE finger umma pumping Sarsour. The symbolism did not go unnoticed. 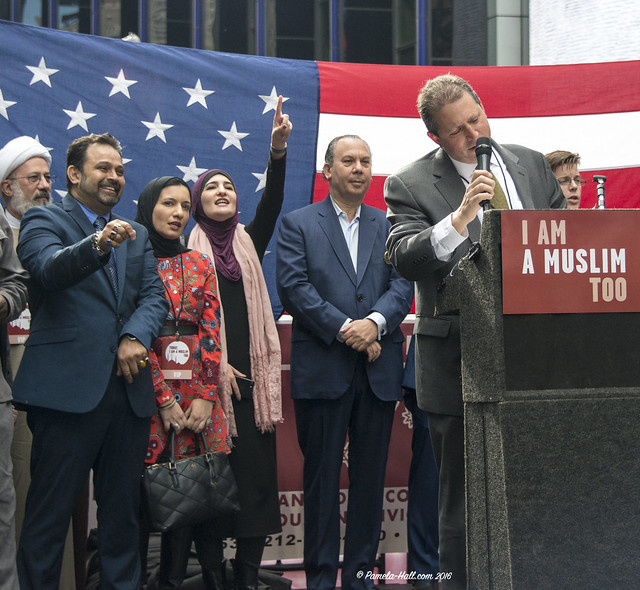 Sarsour BTW resurfaced after seeming to be persona non grata at some recent Muslim pressers down town. But, here she was  – front and center –  along with intifada NYC’s Debbie Almontaser.

The media war for the hearts and minds of a naive America, whose desire to Love Muslims (Islam is off the table), this circus was the darling of the media for about 4 hours on Sunday, Feb 19. 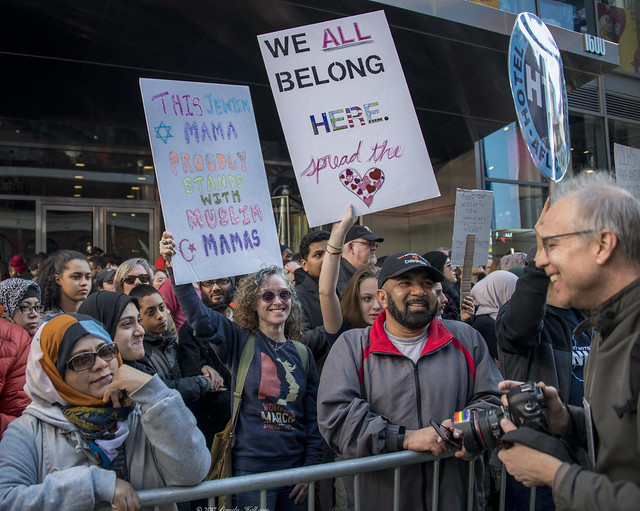 A circus that will continue to play across the country, dominating the media.  Enjoyed. Unchallenged. 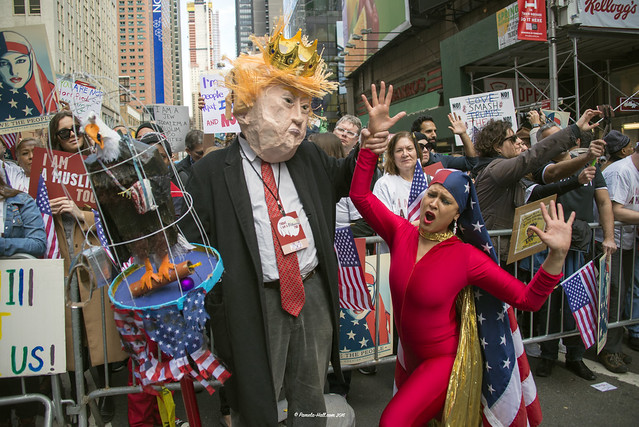 As long as the Hate Trump machine rolls on, these LOVE fests will continue. Appearing soon at a school, college and artistic venue near you. 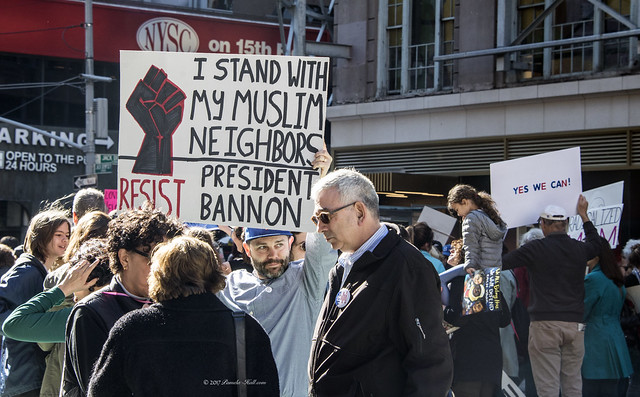 The Future is a terrible thing to waste. 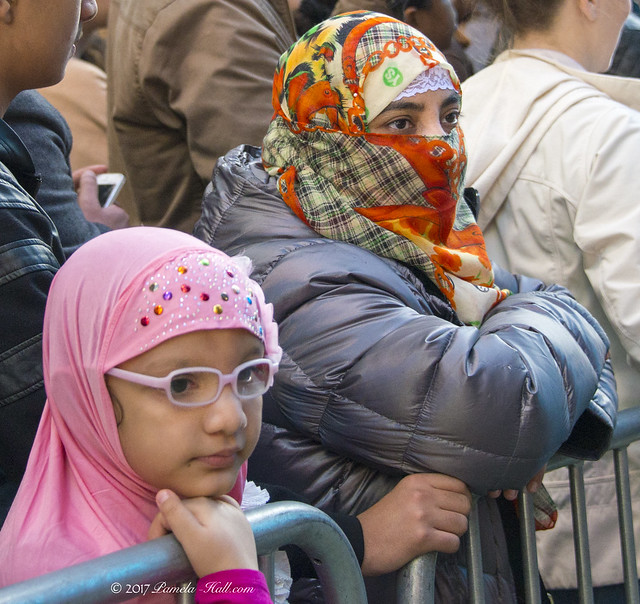 Don't forget to like SonsOfLibertyMedia.com on Facebook, Google+, & Twitter.
The opinions expressed in each article are the opinions of the author alone and do not necessarily reflect those of SonsOfLibertyMedia.com.
Previous Post:
“Ouch”: You Won’t Believe What Juanita Broaddrick Tweeted to Chelsea Clinton About Her Father
Next Post:
MUST SEE: They Did It Again: CNN Shuts Down Interview When Guest Mentions “Fake News”