It appears North Carolina US Senator Richard Burr has been caught being involved in insider trading after he misled the people of the US regarding the coronavirus.

Burr, as anyone would expect, denies the allegations that were made by ProPublica.

Soon after he offered public assurances that the government was ready to battle the coronavirus, the powerful chairman of the Senate Intelligence Committee, Richard Burr, sold off a significant percentage of his stocks, unloading between $628,000 and $1.72 million of his holdings on Feb. 13 in 33 separate transactions.

As the head of the intelligence committee, Burr, a North Carolina Republican, has access to the government’s most highly classified information about threats to America’s security. His committee was receiving daily coronavirus briefings around this time, according to a Reuters story.

A week after Burr’s sales, the stock market began a sharp decline and has lost about 30% since.

On Thursday, Burr came under fire after NPR obtained a secret recording from Feb. 27, in which the lawmaker gave a VIP group at an exclusive social club a much more dire preview of the economic impact of the coronavirus than what he had told the public.

“Senator Burr filed a financial disclosure form for personal transactions made several weeks before the U.S. and financial markets showed signs of volatility due to the growing coronavirus outbreak,” his spokesperson said. “As the situation continues to evolve daily, he has been deeply concerned by the steep and sudden toll this pandemic is taking on our economy.”

Burr is not a particularly wealthy member of the Senate: Roll Call estimated his net worth at $1.7 million in 2018, indicating that the February sales significantly shaped his financial fortunes and spared him from some of the pain that many Americans are now facing.

He was one of the authors of the Pandemic and All-Hazards Preparedness Act, which shapes the nation’s response to public health threats like the coronavirus. Burr’s office did not respond to requests for comment about what sort of briefing materials, if any, on the coronavirus threat Burr may have seen as chair of the intelligence committee before his selling spree.

According to the NPR report, Burr told attendees of the luncheon held at the Capitol Hill Club: “There’s one thing that I can tell you about this: It is much more aggressive in its transmission than anything that we have seen in recent history … It is probably more akin to the 1918 pandemic.”

He warned that companies might have to curtail their employees’ travel, that schools could close and that the military might be mobilized to compensate for overwhelmed hospitals.

The luncheon was organized by the Tar Heel Circle, a club for businesses and organizations in North Carolina that are charged up to $10,000 for membership and are promised “interaction with top leaders and staff from Congress, the administration, and the private sector.”

ProPublica also made a correction in their story:

Not that those amounts make that much difference.

For Burr’s part, he has called for an ethics investigation into what he is accused of doing and issued a statement prior to writing a letter.

My statement in response to reports about recent financial disclosures: pic.twitter.com/J4kye5a4ok

In a letter dated March 20, 2020, he wrote to Chairman James Lankford and Vice Chairman Christopher Coons of the Senate Select Committee on Ethics:

I write to you regarding recent news reports of sales of stock on February 13, 2020.  While I relied solely on public reporting to guide my deicision to sell the stock, it is my belief that an independent review is warranted to ensure full and complete transparency.

To follow up on my conversation with the Chairman this morning, I am sending this letter to request a full and expedited investigation of these sales by the Ethics Committee.  I stand ready to be fully transparent with you and your Committee as you do your work. 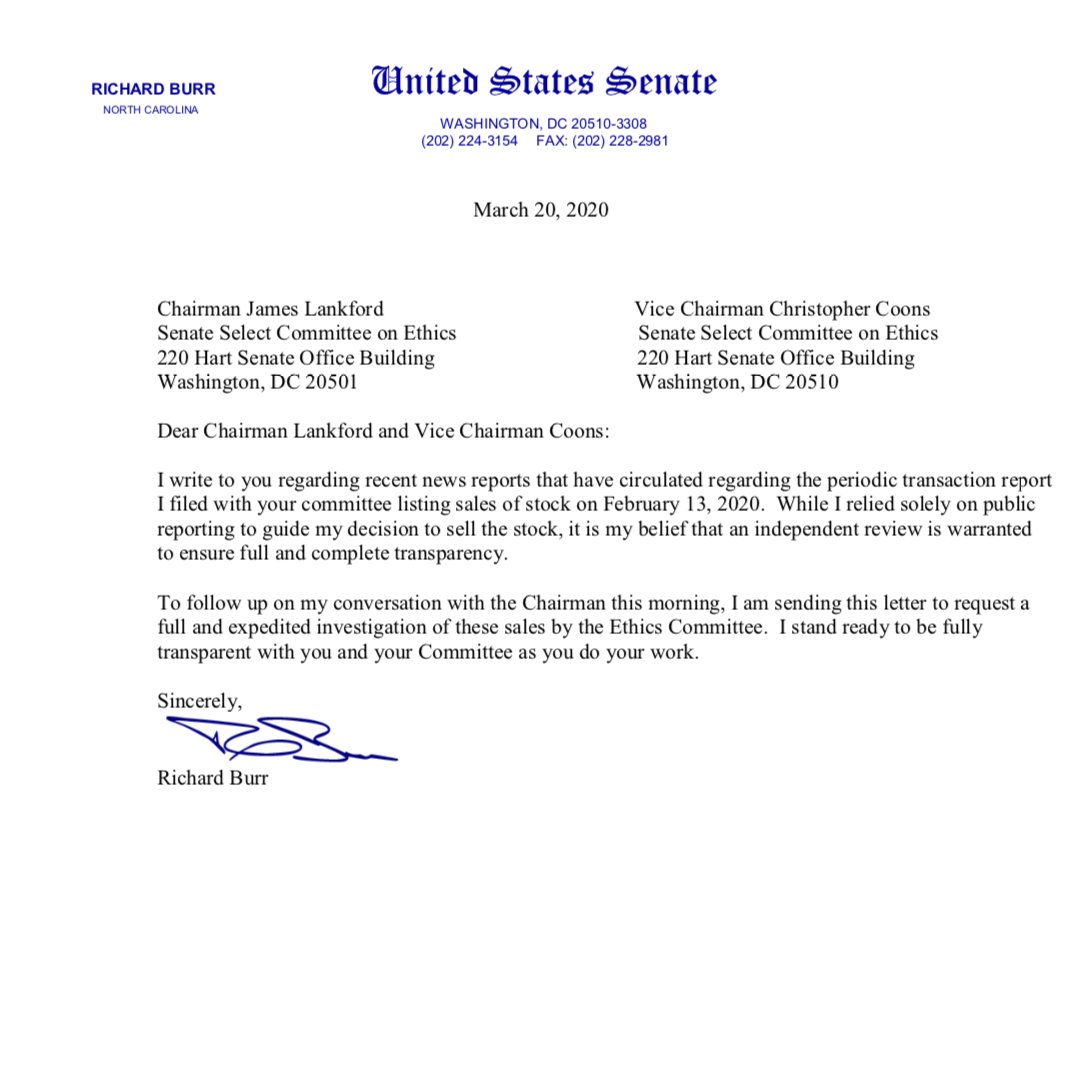 Fox News’ Tucker Carlson called on Burr to explain the sale or resign.

“He had inside information about what could happen to our country, which is now happening,” Carlson said on his show “Tucker Carlson Tonight.”

“But he didn’t warn the public,” Carlson said.

Carlson said Burr didn’t even disavow a Fox News op-ed he co-wrote with Sen. Lamar Alexander, R-Tenn., “just 10 days before, claiming that America was better prepared than ever before for coronavirus.”

He said Burr instead “dumped his shares in hotel stocks so he wouldn’t lose money and then he stayed silent.”

“Otherwise, he must resign from the Senate and face prosecution for insider trading,” he told his audience. “There is no greater moral crime than betraying your country in a time of crisis.”

Something is definitely rotten in Denmark, but we know clearly that many members of Congress have engaged in this kind of criminal behavior while they are supposed to be representing the people of their perspective states.

Don't forget to like SonsOfLibertyMedia.com on Facebook, Google+, & Twitter.
The opinions expressed in each article are the opinions of the author alone and do not necessarily reflect those of SonsOfLibertyMedia.com.
Previous Post:
Will This Be “Just A Recession” Or Will It Be “The Next Great Depression”?
Next Post:
Inmate Release Amid COVID-19 Pandemic Exposes Tyranny Of America’s For Profit Prisons