Last week, pastor and author of The Doctrine of the Lesser Magistrates: A Proper Resistance to Tyranny and a Repudiation of Unlimited Obedience to Civil Government Matt Trewhella led his people in confronting the evil that was taking place in Fond du lac, Wisconsin.  He and about 50 others  stood out in the cold to call out the abomination taking place inside with transvestites, including children in their presence.

Trewhella wrote on Facebook about what took place and issued a challenge to all towns for the men to stand up and confront the evil of the day and preach the law of God and the Gospel of Jesus Christ.

Today nearly 50 of us went to the Drag Queen Bingo gathering. Last week in Fond du lac after church. This week in Waukesha after church. It was 13 degrees outside today. About 150 attended the drag queen show – and it included children being taken inside. When I first arrived, a man was yelling at me from the porch of the tavern. When he stopped I asked him “So when did you decide to give up your manhood?” By the look on his face I could tell he hadn’t pondered that much and that he also understood my point.
Most men in America have lost their manhood and what is the duty of a man. We live in a nation which has done this to men systematically and by design – by the government, academia, and the media. And the rot it has produced is growing. 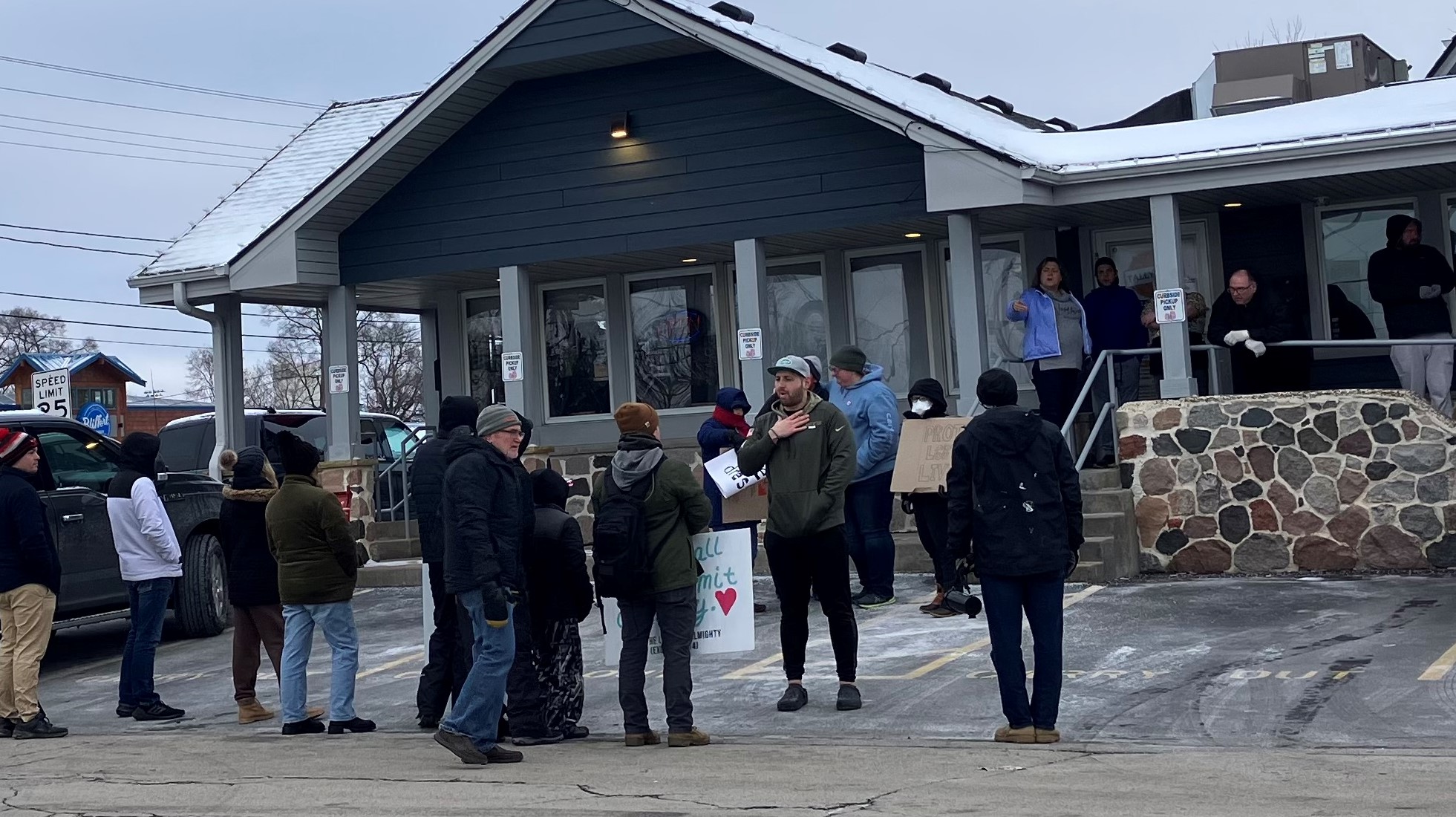 We had some good conversations and some heated ones. Even three pro-abort deathscorts from the baby-murdering deathcamp were there. One mocked me for my arsons before I knew I Christ. I told her Jesus changed my life and offered her my card with my website howJesuschangedmylife.com so she could read of what He did in my life. She took it.
We also preached outside the place declaring His law and pointing men to Christ. Some people passing by went out of their way to stop and thank us for being out there. We were out there for two hours. One man acted like he would run us down with his truck; he then exited his truck and shoved one of the women with our group. Quite the shoving match ensued between a dozen of us and a dozen of them. They learned we are not pacifists. 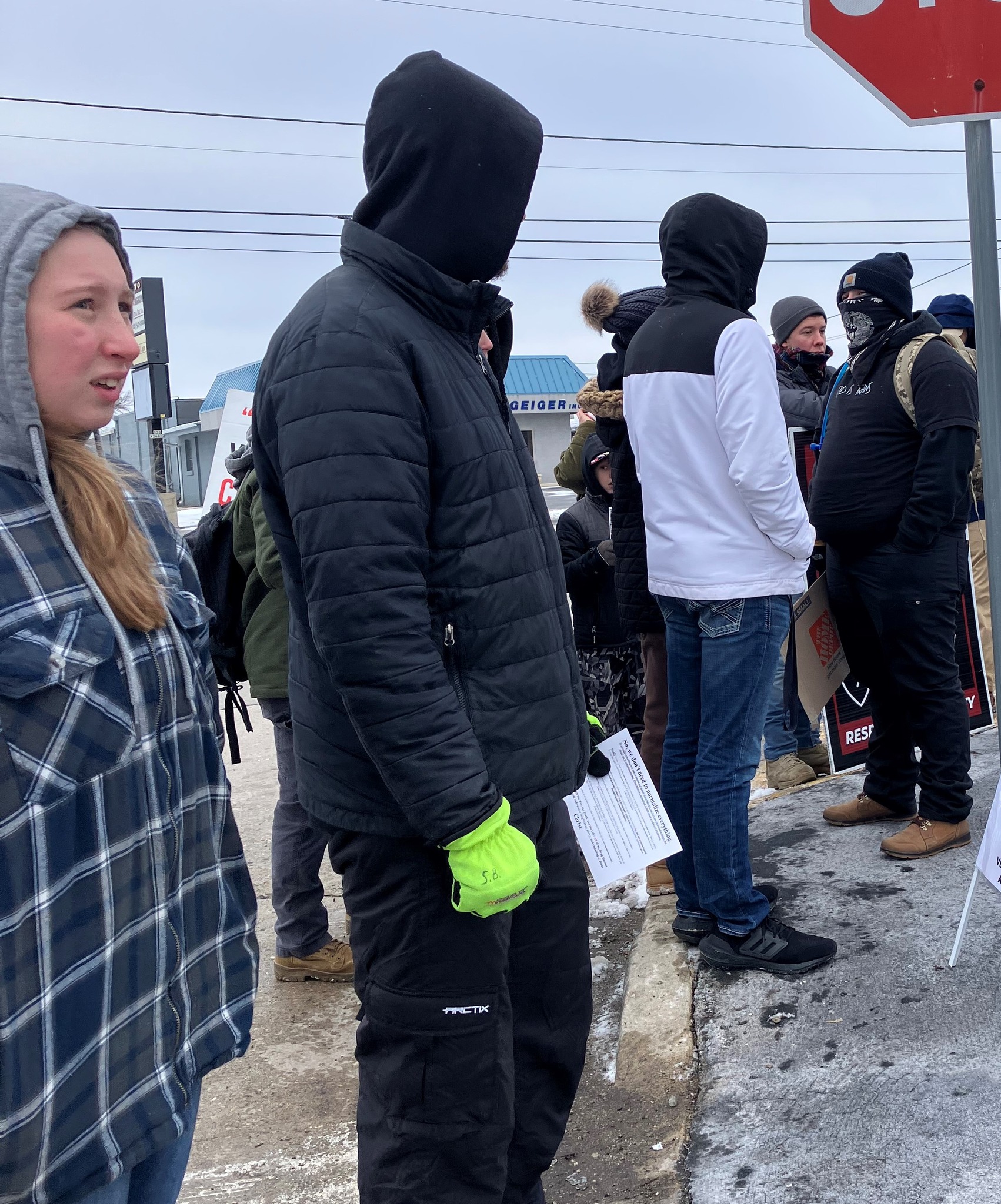 Six squad cars arrived. The deputies tried to make us leave an area that I explained to them was public right of way. We refused to move (the tavern people had yelled in our faces earlier to get off the area and we had informed them also that it was right of way and refused to move). When the supervisor arrived (as I had requested their superior) he informed both the tavern people and his deputies that we had a right to stand there. The man who shoved the young woman with our group was ticketed.
A BRIEF EXHORTATION: 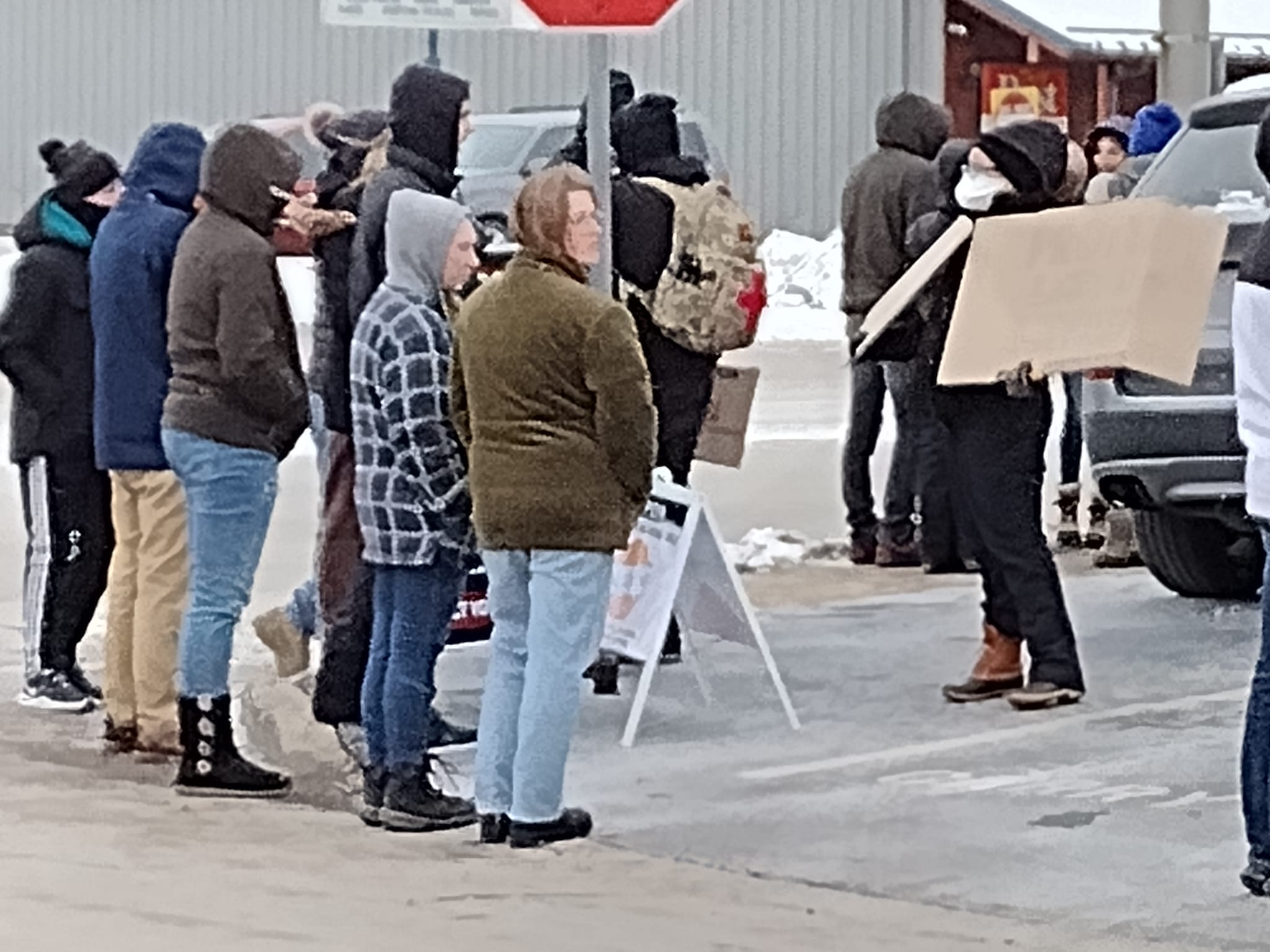 When evil raises its ugly head, it must be confronted. The sodomites and lawless/immoral people already have the large city magistrates in their pocket. Now they have spent this last year – not only in Wisconsin but in other states that we know of – trying to bring their filth to every hamlet, town, and village. I tell Christians everywhere in these small areas that – you must confront this evil or you will not recognize your community in five years.
As Christians, we are motivated to confront evil for three reasons: 1. Our love for the Lord, 2. Our love for those engaged in the evil, and 3. Our love for our neighbors (society at large). 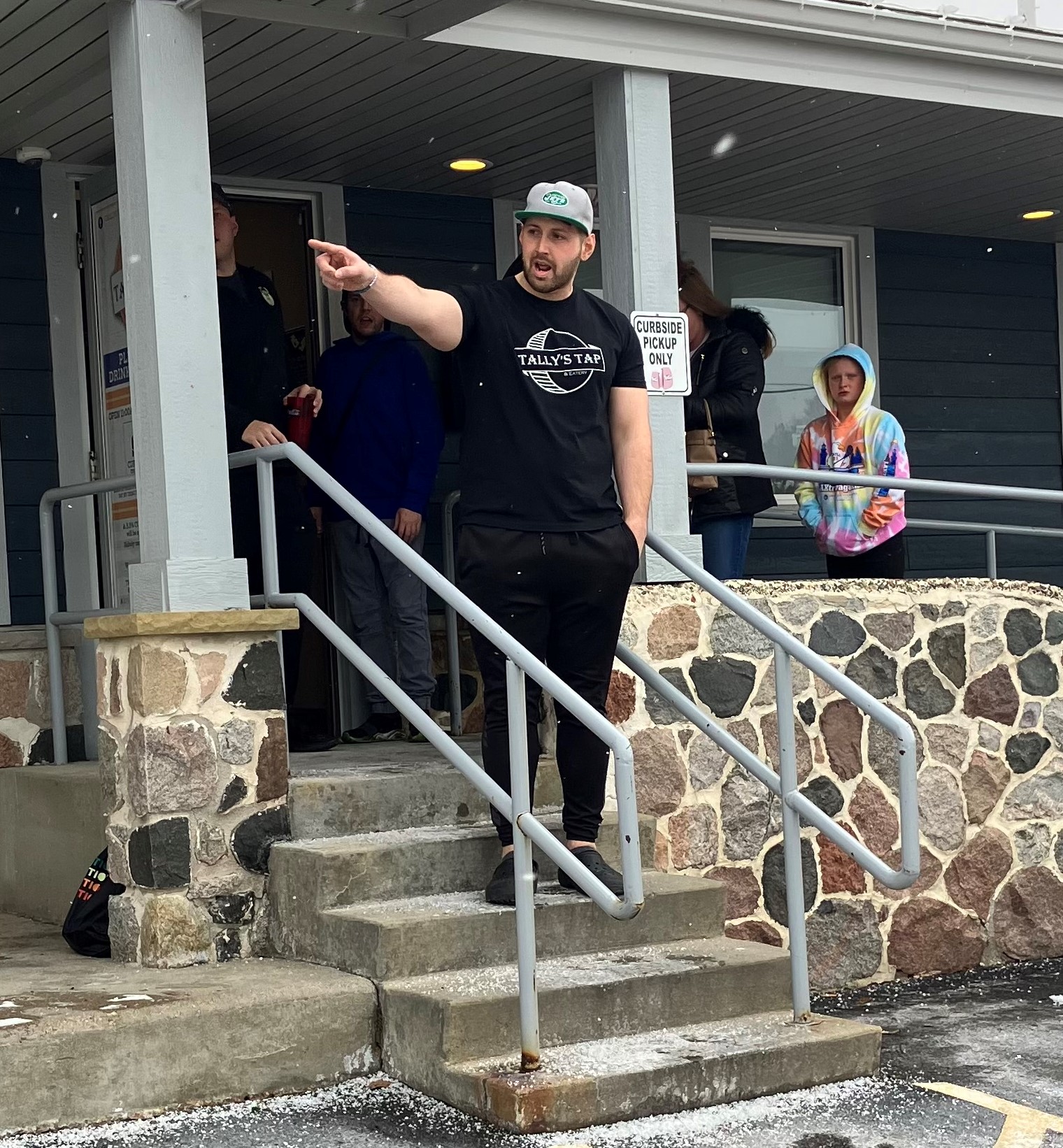 Understand, those who confront evil are always few in number (just read Scripture and history) as most only care about themselves. Understand also that the many who refuse to confront the evil will actually distort and redefine “love” in order to justify their indifference to the evil. Even Christians join in this redefinition of love and condemn the Christians who confront the evil.
The way we know how to love God and love our neighbor is seen in the law and Word of God. We demonstrate love for our neighbor by doing what is seen in His law and Word. Love is defined by the law and Word of God. If you divorce the ethic of love from Scripture, you can twist and redefine it to justify anything (even two men or two women marrying one another). 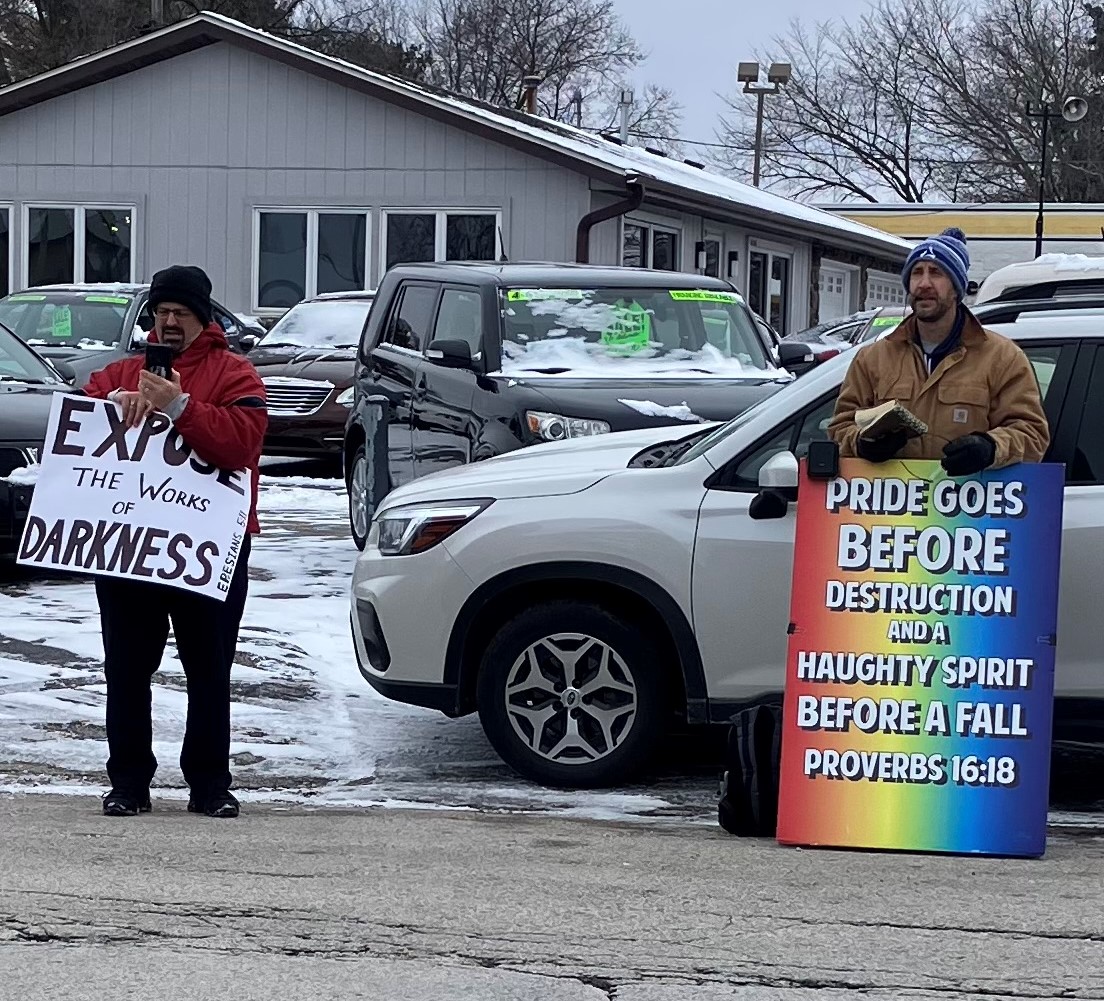 I can assure you, this tavern will think twice about hosting such filth again in the future. If there was no response – if no one confronted their evil – they would feel emboldened to continue in their evil and corrupt the lives of more adults and children, and the evil would be further embedded in the community.
We confronted evil publicly. Declared the truth of God’s law and Word. Pointed men to Christ. May Christ be praised!
Matt has been confronting the evil and has also been used greatly to get the truth to many who represent the People concerning their duties as ministers of God within government.
This is just another example of how when the enemy comes in like a flood, the LORD will raise a standard against it.
Facebook Twitter Pinterest

Don't forget to like SonsOfLibertyMedia.com on Facebook and Twitter.
The opinions expressed in each article are the opinions of the author alone and do not necessarily reflect those of SonsOfLibertyMedia.com.
Previous Post:
Talk About A Fake Narrative! Study Claims “UNVACCINATED” People At Higher Risk Of Traffic Accidents
Next Post:
The Invisible Enemy Of 5G & EMFs: Stealth Attacks On Us, Our Kids & Our Future (Video)